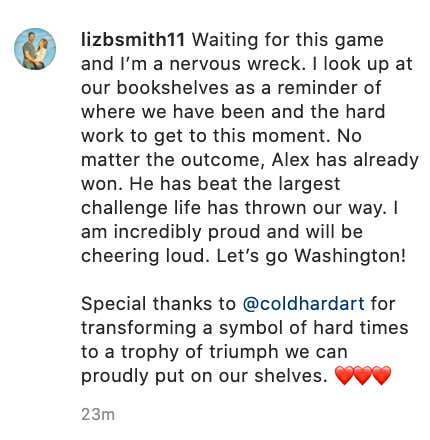 Man that's incredible. Humbling too. Obviously we want nothing more than a win tonight which would send our Washington Football Team to the playoffs. But let's not forget where Alex was two years ago, fighting not just for his leg, but for his life. The way he's battled back shouldn't just win him Comeback Player of the Year, but they should name the entire award after him. What he's done is probably, without a doubt, the most spectacular feat in sports history. Not only is he playing again, but it's at a high level. Remember when we thought at BEST he would take 1 snap and then retire? Boy how wrong we were. It was just…so unbelievable that from everything we knew about his leg injury that he would stand in the pocket and take sacks from Aaron Darnold ever again. But he did. And now tonight he can lead us to a division title. It's simply insane. So maybe you aren't a WFT fan, but it's impossible to root against Alex. Come on board, there's plenty of room on the bandwagon. Only rule is fuck Dan Snyder.