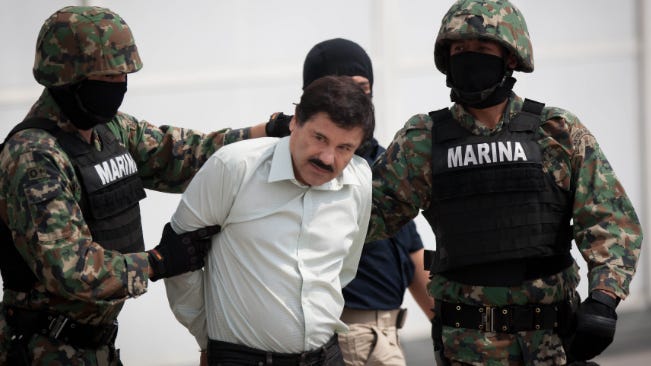 (CNN)After Mexico’s most notorious drug lord stepped into a shower and slipped into a tunnel to escape from a maximum-security prison, authorities vowed it wouldn’t be long before the Sinaloa cartel chief was behind bars again.Prison security cameras last recorded images of Joaquin “El Chapo” Guzman on Saturday night, just before he apparently crawled through a hole in the shower area of his cell block at the Altiplano Federal Prison.

Authorities said they later discovered a lighted and ventilated tunnel nearly a mile long that stretched from the prison to a half-built house, where investigators were searching for signs of Guzman’s whereabouts Sunday. Authorities investigate the tunnel that Joaquin “El Chapo” Guzman used to escape from a maximum-security prison. Now a massive manhunt is underway to find Guzman, Mexican President Enrique Peña Nieto said.

Speaking to reporters Sunday from France, where he is traveling on a state visit, Peña Nieto avoided mentioning the drug lord by name, but he said he was closely following news of the escape of a man who has been among the most wanted criminals in Mexico and around the world. Peña Nieto said he was “deeply troubled” by “a very unfortunate event that has outraged Mexican society.” He vowed that his government would recapture Guzman, step up prison security and investigate whether any prison workers helped the kingpin break out.

“This represents, without a doubt, an affront to the Mexican state, but also I am confident that the institutions of the Mexican state, particularly those in charge of public safety, are at the level, with the strength and determination, to recapture this criminal,” Peña Nieto said.

Guzman is the storied boss of one of the world’s most powerful and deadly drug trafficking operations. He escaped in 2001 from a high-security prison in a laundry cart and was not apprehended again until 2014, when he was arrested at a Mexican beach resort. News that he’d somehow managed to break out again drew sharp condemnation at home from Peña Nieto’s political opponents and abroad from U.S. officials, who’d pushed for his extradition.

“One would have assumed that he would have been the most watched criminal in the world, and apparently, that just didn’t happen. This is a huge embarrassment for the Mexican government,” said Ana Maria Salazar, a security analyst and former Pentagon counternarcotics official. “Obviously it’s going to raise a lot of questions as to what’s happening with the Mexican criminal justice system.”

See Mexico, you know how to take the Drug Lord, you just don’t know how to HOLD the drug lord, and that’s really the most important part, the holding, anyone can just take them.

You know what, fuck it, I kind of appreciate just how dysfunctional and corrupt Mexico really is. I mean think about this for a second. Most notorious drug lord in the world, arrested in 2001, escapes from jail. Spends 13 years successfully evading police, then finally they somehow get enough upstanding police officers to arrest the guy again and boom, escapes in a little over a year. If you’re going to fuck up you might as well be the best at right? I mean what’s even the point? I know you have to at least try to keep him in jail but come on? Mexico is basically every person who drinks, wakes up in the morning saying they’re “never drinking again” only to have a cocktail in their hand by 5 pm.  The Attorney General himself said there was no way he was escaping again.

Then Mexican Attorney General Jesus Murillo Karam told the AP earlier this year that the U.S. would get Guzman in “about 300 or 400 years” after he served time for all his crimes in Mexico. He dismissed concerns that Guzman could escape a second time. That risk “does not exist,” Murillo Karam said.

So just give up guys. Just as we’re all drinking again this weekend, El Chapo is escaping arrest whether you like it or not. Your only hope at this point is that Trump becomes President, then El Chapo is fucked, because “Trump, however, would kick his ass!” – Trump 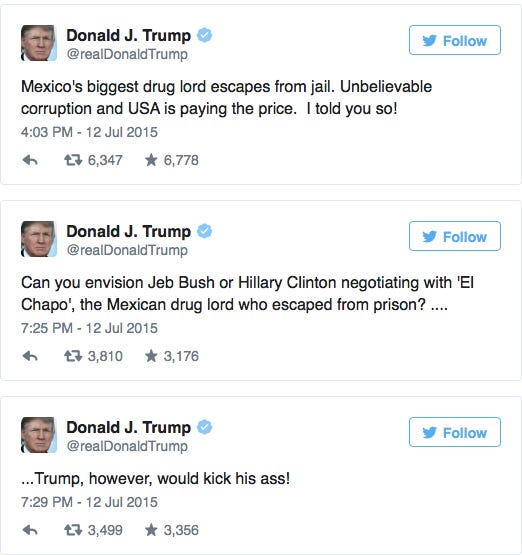 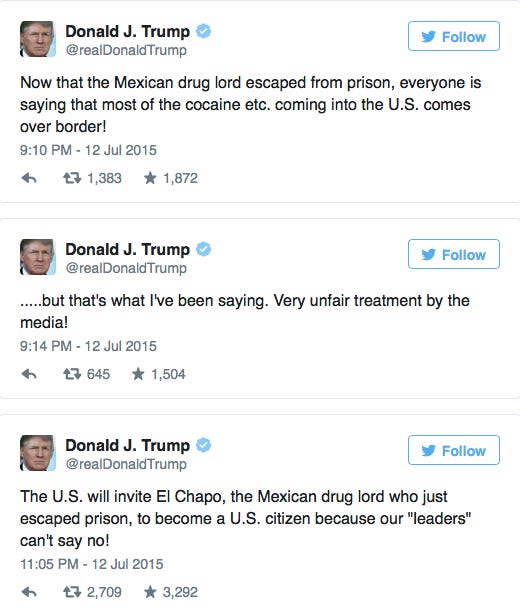 All jokes aside El Chapo is a pretty fucking handsome dude. 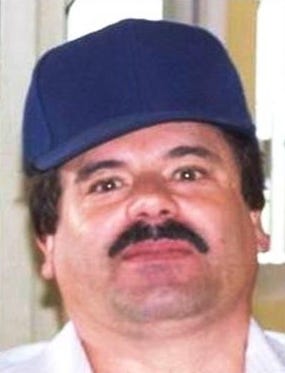 Also kind of a baller move to have two wildly different birthdays like he’s some 12 year old Little League baseball player from the Dominican. 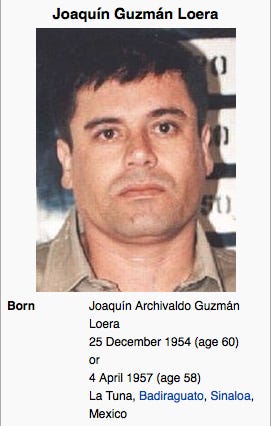