See that guy in the wheelchair above with Lamar Jackson? That's my friend Mo Gaba. Mo's a damn super star and my hero. By the end of this I'm willing to bet he'll be your hero as well.

If you're from the Baltimore area you know Mo from when he would call into the Scott Garceau Show With Jeremy Conn on 105.7 The Fan. He was only 10 or 11 at the time and would call in to talk Orioles, Ravens, he'd say the Wizards would win by 40 every night, and he'd always hit us with his infectious laugh. His calls were the best. He built up a friendship with Scott and Jeremy, but it wasn't until Jeremy finally met Mo that he learned that Mo was sick.

Mo's mother saw a white spot on his eye in a picture when he was a baby and that led to a visit to the doctors. Fast forward 14 years and Mo is blind, has trouble walking, has been through 5 separate bouts with cancer, tumors, and just last week was told the cancer in his lungs is spreading aggressively and to other areas of his body. Time isn't on Mo's side now.

The medical route has run it's course and treatment for Mo has stopped. Never once has he complained, and never once has he asked "why me?". Instead he just wants to be a normal 14-year-old, listen to the radio, have sports on the TV, play video games, eat Chic Fil A, hang out with his saint of a mother, Sonsy, and watch SpongeBob. I went to visit Mo last fall when he was at Johns Hopkins for treatment. Sat there with him for 3 hours while he recited every word to the first ever episode of SpongeBob, played video games, ate pizza, and just hung out. One of the best days I've ever had. I know Mo loves the fried shrimp from Jimmys Famous Seafood, so a few weeks back I dropped off some shrimp and about 5 or 6 massive pieces of cake for Mo and Sosny to munch on. The Gaba's are saints, and I really just use any excuse I can get to come visit and see them.

Since becoming a regular on the show, and with his story becoming wore widely known in the area he's become friendly with nearly all the Orioles and Ravens. In 2019 Mo became the first person in NFL History to announce a draft pick while reading it off a braille card. Ben Powers, guard out of Oklahoma is the guy who will always be linked to Mo through that pick. I asked Mo who his favorite Ravens player was a few months back and I said "Lamar, right?" He shook his head and said "NO, BEN POWERS!". He knocked that pick out of the park. He's thrown the first pitch at Orioles games, he's done the coin flip at Ravens game, held his own press conference with Adam Jones and Manny Machado at Orioles Fan Fest a few years back, and in January he was named PressBox's 2019 Person Of The Year and shared the cover with Lamar Jackson. I rode with Mo and his mother in a limo to receive his PressBox award and man did Mo love it, guy had so much space in that limo. Some unbelievable experiences for the kid who everyone in Baltimore loves. He's also become super close with Orioles outfielder, and another guy who is battling cancer, Trey Mancini.

Trey learned of Mo's story a few years ago and like everyone else and fell in love with the kid. It started out as a friendship with Trey pushing Mo along and helping him get through cancer, and now Mo is giving Trey advice on how to get by and live everyday with cancer. This whole situation has shown me that cancer doesn't care if you're a 28-year-old stud MLB player, or a 14-year-old from Glen Burnie. Cancer does not discriminate. Instead of heading home for the All Star Break in 2018, Trey stayed in Baltimore and took Mo and his mother to Dave And Busters for a day of games. Who else does that? Trey's a damn saint.

I got a call from Jeremy last Friday that Mo isn't doing well, and we discussed some stuff for the future. Saturday Mo's mom told me they were throwing a drive by graduation parade for Mo since he just finished the 8th grade. Knew exactly what I was going to do and got on the phone. Within minutes of making some texts and phone calls I had a video message sent to me from Mr. Crabcakes himself from Jimmys Famous Seafood, it was from The Big Show. I texted Trey and we talked about him coming down for the parade and there was 0 hesitation, he'd be there. Battling stage 3 Colon Cancer himself, he was gonna come congratulate Mo for finishing middle school. Trey even bought Mo and Sonsy Chic Fil A, and got to spend some alone time with Mo playing video games.

I sent texts and emails to anyone and everyone that I could get info on. So shout out to Kristen Hudak with the Orioles, David Hess, Asher and Alanna Wojciechowski, John and Caroline Means, Hanser Albert, Justin Tucker, Ally and Keith Mills, PT, LoCash, Torrey and Chanel Smith, Evan Phillips and Elizabeth Devita, Rick Ritter, John Minadakis for sending the Jimmys truck and letting everyone eat for free, Trey Mancini, Sara Perlman, John Maroon, and holyyyy shit Cal Ripken Jr. I emailed Cal's PR guy at 1 PM on Sunday and at Monday at 10 AM I had a video message sent from Cal. Unbelievable. He offered Mo tickets to a future Orioles game using the best seats in Camden Yards which is the coolest thing I've ever heard. I'm still getting videos sent to me too, Paul Rabil, Ray Rice, Jimmy Yacabonis, several other athletes, working on some other big names too, anything to put a smile on my guy Mo's face. I'll post the video at the bottom, Twitter made me chop it up but take a look. 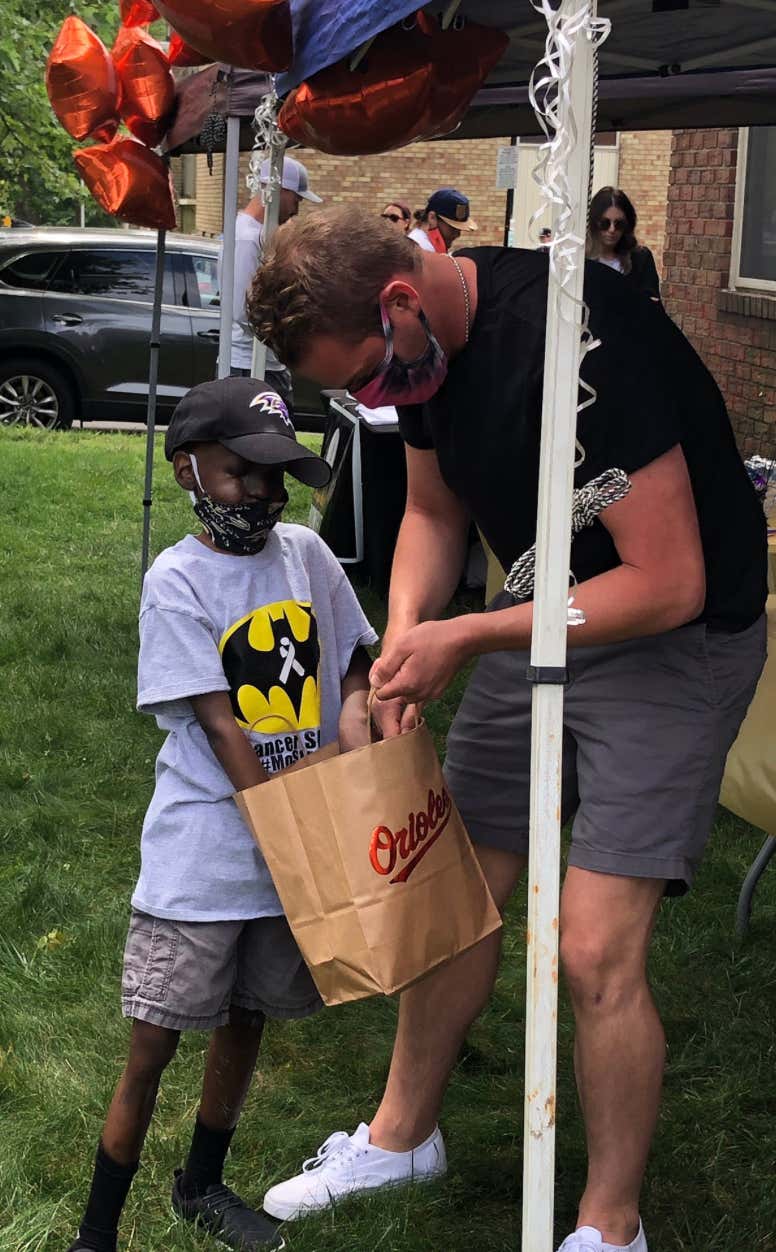 Jeremy Conn deserves a boat load of credit, he started this all by asking for a bed for Mo, a twin bed so he could be a little more comfortable for the upcoming weeks. That request has turned into a new bed, new gaming chair for Mo, a dresser for their new apartment, and over $30,000 raised for the Gaba's. $30,000 in 4 days is insane. We love and thank all of you who donated, my venmo is also still open (@Eric-Arditti) if anyone would like to contribute anything.

Tuesday was the graduation parade and I'm still blown away by the amount of people that showed up for Mo. I mean it had to be at least 300 cars. There was a helicopter overhead, police cars, SWAT vehicle showed up, a few homeland security cars came to wish him congrats, it was amazing. I had the honor of hanging at the house with Mo, Jeremy, Sonsy, and a few others as we watched the parade with Mo. I didn't really sit with Mo during the parade, I was off to the side and behind him in tears watching complete strangers, members of the Ravens, Orioles, teachers, police, fire fighters, lunch ladies, principals, and everyone else drive by with signs, honking their horns, blaring music all for my guy Mo. I reached out to Ravens offensive lineman, Bradley Bozeman, at 8:30 Monday night, let him know the plan, and even though he lives an hour away, he and his wife were at the parade. They jumped out of the car with a HUGE balloon and gift basket for Mo, and even gifted Mo a game ball from the Ravens, of course Mo gave it to his mom. Great, I'm crying again.

It was just such an amazing day. With the amount of negativity going around, this was truly one of the best days in my life, and I hope it was one of the best days of Mo's life. Being around Mo and Sonsy as they got to see the insane amount of support that people have for their family, it blew me away. Mo is a special person, he's not just a kid, he's not just an Orioles and Ravens fan, he's not just a now high schooler, he's a hero to almost everyone in Baltimore. To think that it all started with a kid calling the radio station to talk sports while his mother was at work, and now he's being celebrated by the city and everyone in it. If there is one family who deserved this, it's Mo and Sonsy Gaba. He's the first person I think about when I'm having a shitty day, who the hell am I to complain that there is no baseball. There's never been a negative word that's come out of Mo's mouth, even with 5 different bouts with cancer. Mo is a hero, he's my hero, and he should be your hero. You want a good cry? Go to YouTube and type in "Mo Gaba", watch the joy on his face as Adam Jones gives him a hug, listen to the giggle in his voice when he calls a play for the Ravens in practice. What a legend, everyone needs a Mo Gaba in their life. There are going to be some terribly sad days soon, but until then, I'm so incredibly happy we were able to help Mo have a banner day. We love ya, Mo.