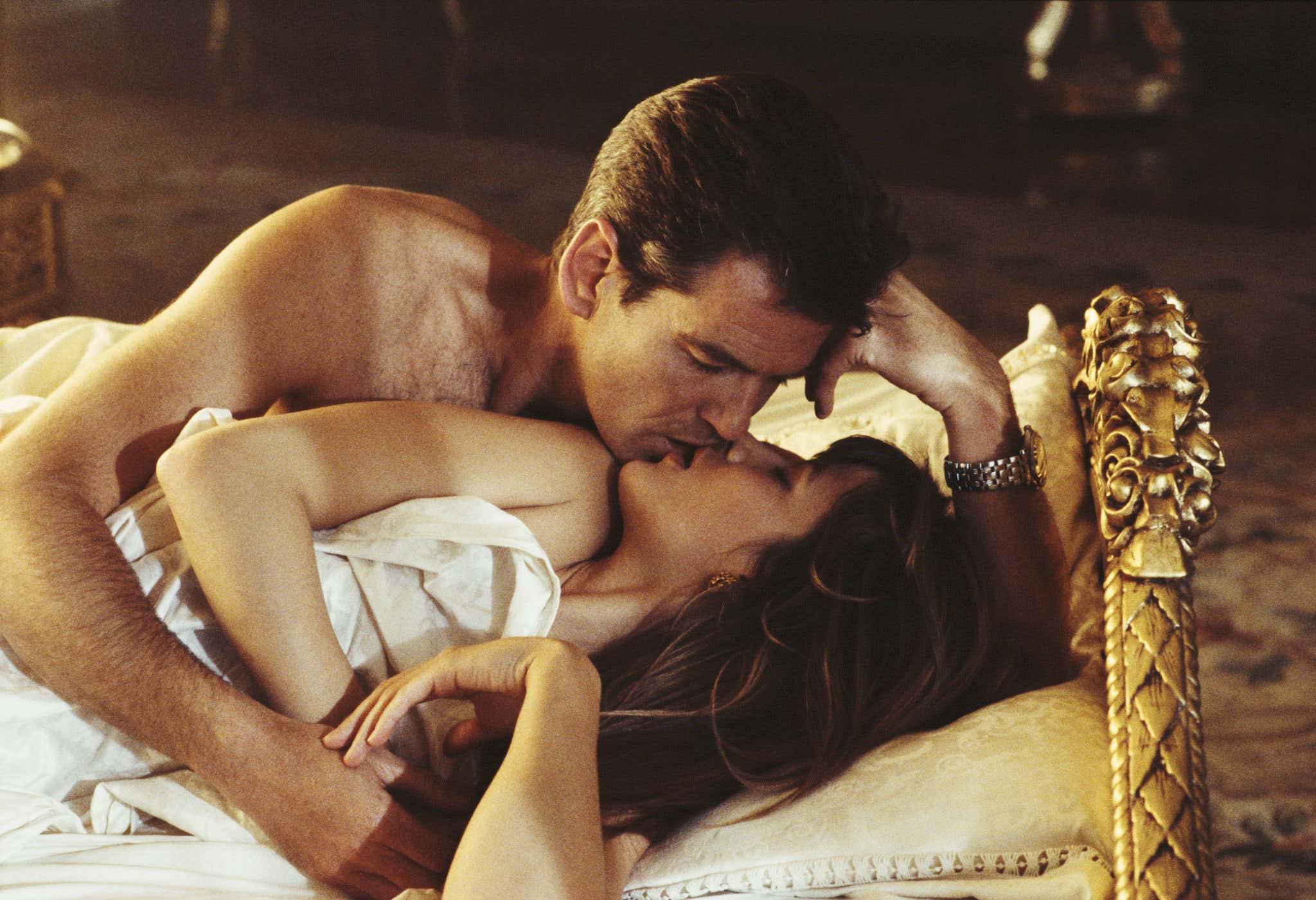 Welcome to the Sunday Sermon. If you couldn't guess from the header to this blog, the topic for today is dick size and the misconception that it is the main indicator of good sex.

Yesterday, I got the pleasure of giving dating/sex advice on the Viva page. One of the questions was as follows:

I had 15 seconds to answer, which IMO is not nearly enough time to give a great answer, but hey, I did my best.

Listen, I've experienced both of these scenarios. And I've had a lot (A LOT) of the whole "healthy relationship with bad sex" portion before. At first, it was fine. Like how much better did I need the sex to be really? Was I "satisfied"? I mean, NO. Was it bad? I mean, it was ok. If sex is like pizza, which we all love, it was kind of like Papa Murphy's. [insert high pitched "it's ehhh"] It passes. But ultimately it's not the pizza you want for the rest of your life.

But.. there was compatibility in other areas and a foundation of friendship, which, normally are critical keys to a "healthy relationship". Like how many hours a day are you really having sex? Even if it's like 4 hours (insert eye emoji) that's only a quarter of your waking hours. You still have another 12 hours where your sex life isn't necessarily at the forefront of the relationship.  Well, that's how I rationalized it at first. But eventually, I got the itch for something a little more spicy and fulfilling. I was a little tired of Papa Murphy's pizza (Dave did give Papa Murphy's a 3.8). What I REALLY wanted was the artisan woodfired variety (think John's of Bleecker Street).

In other words, it was not good. Not sustainable.

But what exactly, does "good sex" mean? That is really the question.

After I put out this video, I got a DM from a friend around this exact idea. What he wrote immediately gave me the motivation to write this piece. 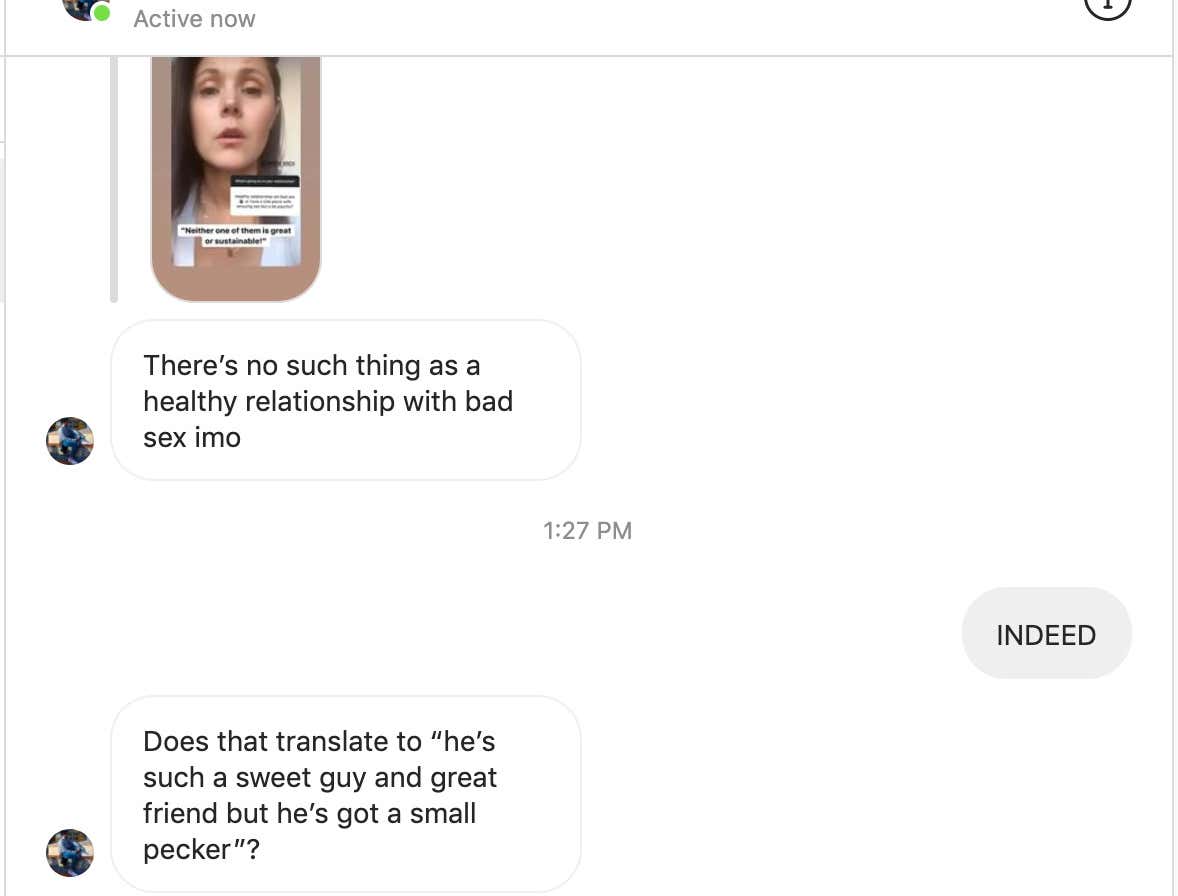 I can firmly say I have had plenty of experiences with well-endowed men, and at the end was like "not doing that again."

Earlier in this pandemic, I did an AMA and someone asked me about whether I would rather have a "big eggplant or little eggplant," presumably referring to my thoughts on the subject matter of today's sermon.

The responses from, of course, men, were that I was rebuking eggplants altogether and was signaling my lust for women. That isn't what I meant at all.

So let's get into it.

Let's start with this piece of data from Psychology Today.

"Only 25 percent of women are consistently orgasmic during vaginal intercourse."

So then, if 75% of women aren't able to consistently orgasm through penetration, then things start to come clearer into focus. Dick size largely (no pun intended) isn't a meaningful indicator of how good a woman will find the sex to be.

Hence my quote. "Life is so much more than just the eggplant. It's almost exclusively everything BUT the eggplant. Think about it."

In my view, great foreplay is the majority of what makes great sex. Like I've mentioned before, every woman's body is different, and if a man wants to be seen as good in bed, it's his job to find out where on her body she's most responsive, what turns her on mentally, and to explore that with a sense of imagination, curiosity, and a playful spirit.

I've had a lot of bad sex where it felt like a formula.

This should be an experience, a journey, different every time, but instead, bad sex feels closer to putting together an IKEA bookshelf. Here's what I typically see in bad sex.

Step 1: Kissing and grabbing/squeezing (with way too much force and pressure)

Step 3: Use of Fingers (typically with way too much force and pressure)

Step 3b: Dry Humping, (typically with way too much force and pressure)

Step 5: Penetration (Deep, hard, and without variety), Leg's up so HE can get as deep as he wants

In the end, he is happy, and probably ready to sleep. And me? My sexual frustration is at an all-time high, and not in a good way. He's climaxed and I haven't even gotten close.

And on and on.

The point here is you've got to put in your time. If you don't, you'll never know what it is that makes your woman tick (something I've written about before) and she's just going to go about eating Papa Murphy's for the rest of her life. And you know what? She's probably going to get pretty fucking tired of it. If your only move is an oil derrick, no matter what kind of heat you're packing, she's going to eventually go find herself someone who knows his way around her curves, and that'll be that (note I refrained from an "oily Derrick" metaphor -- Credit to me).

The great shame in this, of course, comes from the fact that a significant worry for many men is penis size. Dude, despite what the internet might say, I'm telling you, penis size really doesn't fucking matter. What matters is you GETTING THAT CHICK OFF. And when it comes to that? Big or small or right in between, that's going to be a job for your fingers, your tongue, your hands, and most of all, your brain. The D is just icing on the cake. And if you don't worry about it, and take care of business, I promise you, you may have 99 problems but your chick won't be one of them. And then you'll have a great relationship AND great sex.

No matter what you're born with.