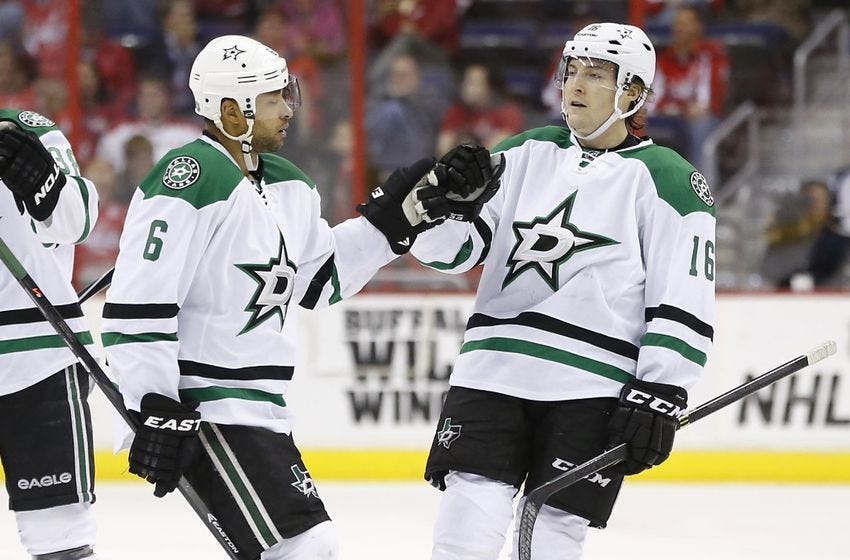 Hey Trevor Daley and Ryan Garbutt, welcome to Chicago, I guess. Try to not mess everything up.

Even though this was a trade nobody wanted to make, Stan Bowman got a couple of guys who can help the Hawks win in 2015-16.

Daley is a smooth skating defenseman who has been in the league for 10 years now. I’ve seen some chatter from people on twitter talking about how Daley’s advanced metrics are horrendous, but that doesn’t matter. It doesn’t tell the real story of his game. He was a product of his environment in Dallas. Daley has considerable tools. Great skater, willing defender, makes a great first pass, and can QB a power-play. I’ve always had a weird hockey crush on Daley and I think his game will flourish playing in Chicago under Coach Q. He had a career year offensively in 2014-15 with 16 goals and 22 assists. He’s definitely a top 4 caliber defenseman, but I am hoping the Blackhawks can find a way to bring back Oduya. Keith, Seabrook, Hjalmarsson, Oduya, Daley, and TVR would arguably be the best defense in the league. That would also allow the Hawks to be patient with Pokka who could probably use another year in the AHL. Here is an example of Daley’s offensive skill

Daley also isn’t afraid to mix it up a bit. Mugging Corey Perry is probably the quickest way to my heart.

Ryan Garbutt is a solid player. He has seen time in Dallas’s top 6, but he’s really a bottom 6 player. He will add considerable sand to the Blackhawks lineup. Something they will likely need as the LA Kings and other Western Conference rivals seemed to bulk up this summer. Now, I’m not going to lie. I’ve never been a big fan of Garbutt. He plays over the edge sometimes and I’ve always associated him with Antoine Roussel who is the biggest rat in the league. Garbutt is a pretty intense forechecker as well. He will be a guy who can go and retrieve pucks for linemates and will go to the net as well.

Garbutt has been suspended for dirty hits in the past, but in general he is a smart player who plays hard. I’m hoping he’s a guy that you HATE on the other team,  but love on your team. It’s a fine line. In 2013-14 Garbutt had 17 goals and 100+ PIMs. Definitely a guy willing to stand up for his teammates.

Still not good. Kruger still doesn’t have a contract. Nor does Oduya and the Hawks are currently $405K over the Salary Cap. So more moves are coming. Bryan Bickell’s $4M cap hit has essentially chained him to Hull and Mikita statues. Between his cap hit, lack of regular season production, being a ghost in the playoffs, battles with vertigo, and maybe wonky knees, nobody wants to trade for Bickell. Everyone knows the Blackhawks are in Salary hell. Even if a team has some interest in Bickell, why give up an asset when you might be able to get him for free if the Hawks put him on waivers? If Bickell were to clear waivers the Blackhawks could bury him in the minors, but he’d still carry a $3.1M cap hit. That’s a lot of dead money, but it would make them cap compliant. The Hawks could explore trading Versteeg, as I’m sure they already have, but he’s kind of insurance for Panarin. If Panarin sucks and bolts back to Russia AND the Hawks moved Versteeg they’d suddenly have real depth issues.

It’ll be interesting to see how this lineup gets cobbled together next year. Obviously the Hawks still have enough talent to be a contender with Toews, Keith, Kane, Hossa, Seabrook, and Hjalmarsson, but winning has so much to do with chemistry and character. Trying to replace a leader like Sharp, and a budding star like Saad with Panarin, Anisimov, Dano, and Garbutt is daunting. They Hawks really need Turbo to take the next step and be a 50-60 point guy and will need Dano or Panarin to pop.

I’ll continue to blog the Hawks roster moves and will probably do a flowery tribute to Patrick Sharp in the next day or so. Until then.