Folks, I know Alabama is getting ready fo the biggest football game of its season in just three days, but we have a much bigger story to worry about in Tuscaloosa, at least as far as Rick Karle is concerned. Apparently, some young reporter referred to Nick Saban simply by his last name during his Rose Bowl press conference and Karle used this opportunity to make the Rose Bowl his time to shine.

Karle decided to take the time to write out this unnecessarily lengthy Facebook post for no apparent reason other than to blast a young colleague and make himself the center of attention. Just read some of this thing.

There are so many unbelievable things in there that I don't even know where to begin. I guess I'll say first that Rick's entire premise flies in the face of what he should have been taught in journalism school — yeah I have a journalism degree too, pal. You're literally taught before you ever go into a press conference not to use the word "coach." The person you're speaking with is not your coach. You're both adults and you call that person by his or her name. So the basis of this guy's entire post is patently false, regardless of how he feels.

But then I keep reading some of the stuff this guy says and I honestly can't believe how important he thinks he is. He's had Nick Saban in his dinghy, people!

I have had Coach Saban sit in my kitchen and in my living room.
He's stood on my front lawn and sat in my dinghy.
In my house, Nick Saban is always "Coach Saban."

I have stood in the Saban's living room, kitchen and recruiting room.
I have stood on his front lawn to receive coaching wisdom.
I have sat next to Miss Terry to watch her play the piano.
At the Saban house, he's always "Coach Saban".

You really need to read the whole thing. To hear Rick tell it, he is protecting Saban from disrespect never before seen in the world. And if you weren't sure just how badly Rick wants to be besties with Saban, take a look at his Twitter bio. 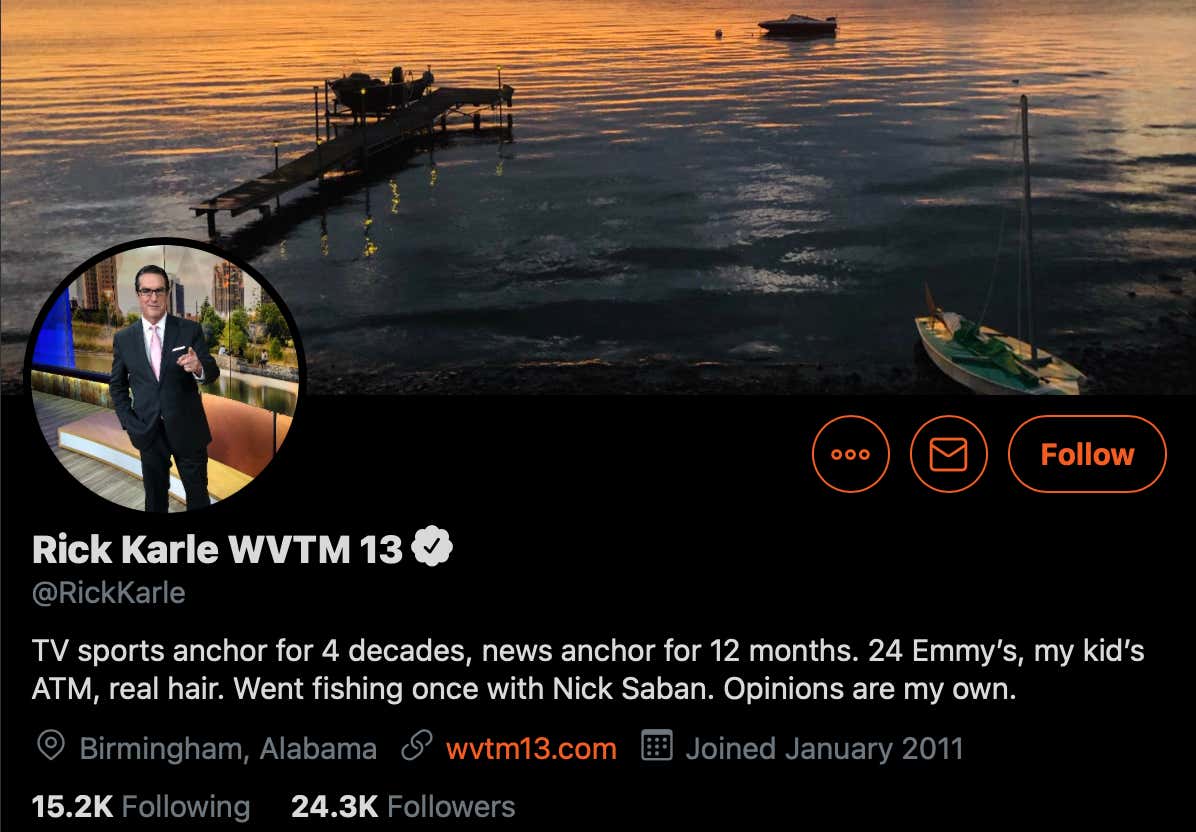 "Went fishing once with Nick Saban." Man, this guy has it bad. Also very interesting he uses a term other than Coach Saban there to refer to his king.

My guy Rick wants to be the center of attention so desperately. "Please notice me, Coach Saban!" he shouts from his square on the weekly Zoom press conference, yearning just once for the 69-year-old football coach to give him a fraction of the attention his father never did.

And pal, if it takes a 1,000-word Facebook post needlessly making fun of a young reporter who was probably extremely nervous to ask a question of arguably the greatest football coach of all-time to do that, then you go for it, buddy. Maybe Nick will let you wash his balls on your next golf outing.