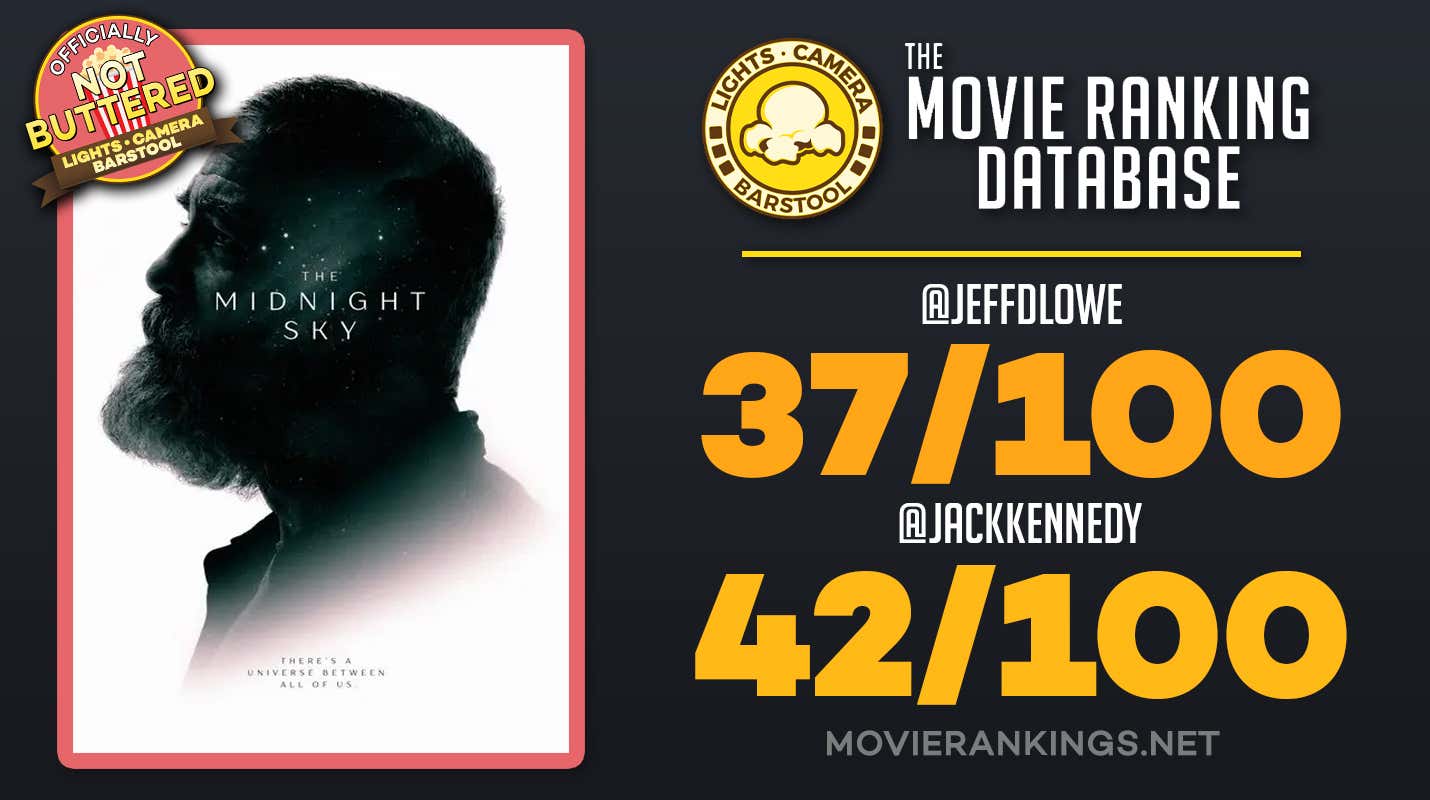 A lone scientist in the Arctic races to contact a crew of astronauts returning home to a mysterious global catastrophe.  (via Wikipedia)

JeffDLowe (37/100): With a cast and concept that elevate expectations, George Clooney's 'The Midnight Sky' unfortunately never finds a way to get off the ground, weighed down by a boring and unimpressive story. The visuals of this attempted big, sweeping epic can't save it from feeling lifeless, flat, and like it belongs at the bottom of the list of 2020 movies.

These long, epic tales of visual wonder, with complicated stories and themes, are my type of movies. Take 'Annihilation', or 'The Lost City of Z' for example, recent releases that I hold in very high regard. They are both slow burns that truly churn hard on size, scale, and emotion. Those movies wear their respective hearts on their sleeves, whereas with 'The Midnight Sky' there is almost no sense of a heart-beat at all.

The style of story-telling, with constant flashbacks (to a younger version of Clooney's character played by a different actor… maybe doing a Clooney impression? Or some sort of weird voice-dub by Clooney himself? It's fucking strange, that's all I know…), and jumping from Earth to space felt messy. There seemed to be no real rhythm or flow to a movie that is under two hours long but felt like an eternity with little sense of urgency.

Again, that slow burn and pace are both fine when accompanied by an intriguing story, but that just isn't what you get with 'The Midnight Sky'.

While I wasn't rooting against any of the characters, I struggled to connect emotionally with Clooneys, a man with a brutal redemptive arc, and all of our space-bound characters bordered on hollow. Even a character such as Felicity Jones' didn't grab me all that much, and the rest of her crew members made some puzzling decisions within that story that really took me out of the movie at times. As for the child character on Earth with Clooney, Iris, her storyline, and connection to Clooney's character was possibly the only truly intriguing part of the movie when it was all said and done.

Everything about this movie's trailer, promotional material, and cast screamed "wow," but when the credits rolled, I just sort of shrugged as I turned off what ended up being a big cheesy, boring mess of an attempted space epic.

KenJac (42/100): I am a huge, huge sucker for movies that are set in space. Doesn’t matter if it is bad slop like ‘Passengers’ or ‘Life’, I just gobble it up. This movie, though, may change my policy on that. While it has some redeemable moments, I think that for every one of those there are five inexplicably bad ones.

I don’t really think there are any bad performances in the movie, per se. The load is carried by George Clooney, who is adequate, at least. Felicity Jones and Lights Camera Barstool interviewee David Oyelowo were solid as well, and I can’t really think of a way in which any performance could have been changed to make the overall movie any better.

The problem is mostly on the technical end. The movie just has no motor, no spark, and no real entertainment value. Clooney’s character, Augustine (boooo) talking about his life, or the movie showing you his old life via flashbacks to one of the weirder young castings I’ve seen. The guy they cast as young Clooney looked fuck-all like him but did a very deliberate impression of him. It makes me think that he was cast solely for his ability to do Clooney’s distinct sounding voice. In fact, I don’t even know if it was that actor, it might have been automated dialogue replacement for all I know.

The most exciting moments came within the spaceship, which was pretty cool. It reminded me a bit of ‘Sunshine’ in that regard, except maybe a little less morbid and dramatic. Outside of that, there aren't a lot of redeemable qualities. It’s just not entertaining nor interesting enough to warrant the concept.

--
The movie is Not Officially Buttered, with super low scores from myself and KenJac. You can head to Lights Camera Barstool right here to listen to our latest episode where we reviewed 'Soul' and filled out Trillballins' Rejected Baby Yoda Names Bracket.