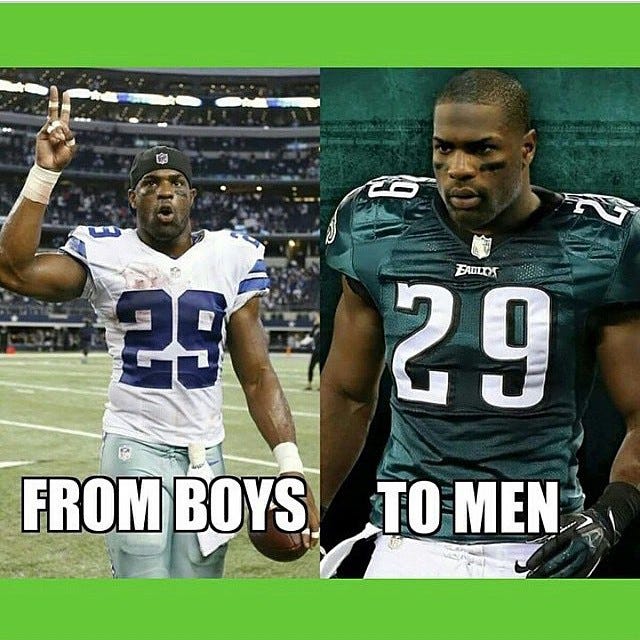 NFL – The NFL Network series featuring the Top 100 Players of 2015 concluded on Wednesday night and running back DeMarco Murray was ranked by his peers as the league’s top running back and fourth-best player overall. It is the highest position for an Eagles player since the series launched in 2011. Three of Murray’s new teammates joined him on the Top 100 Players of 2015. Running back Darren Sproles was No. 81 on the countdown. Linebacker Connor Barwin debuted at No. 58. Tackle Jason Peters, the No. 3 offensive lineman on the Top 100, checked in at No. 40.

Tony Dorsett, Emmitt Smith, and Herschal Walker all donned the Cowboys star, and still, Demarco Murray had the greatest single season rushing effort in Dallas history. And it’s for that reason his peers respect him so much.

I don’t think even Eagles fans appreciate how much of a steal we got in this cat. Am I concerned about him breaking down after touching the ball 449(!!!) times last year? Of course I am. However, people need to realize he’s joining the backfield with Darren Sproles and Ryan Matthews. It’s going to be Cerberus* out there, baby. A complete three-headed monster. There’s NO WAY Murray is going to be required to take on that much of a workload. Sure, his dick is going to swing lower than the other two, but I’m talking 225-250 touches, max. That should keep him and everyone fresh to run no less than 387 snaps every 60 minutes.

Essentially it was LeSean McCoy for Kiko Alonso and Demarco Murray. I’d say that was pretty damn fine work done by Chip. The pieces are fitting together in the puzzle, right? KNOCK KNOCK MOTHERFUCKERS.

*Best T-Shirt idea I’ve ever had, even though maybe 8 people get the reference. I’m like Hans fucking Gruber out here. Benefits of a classical education.