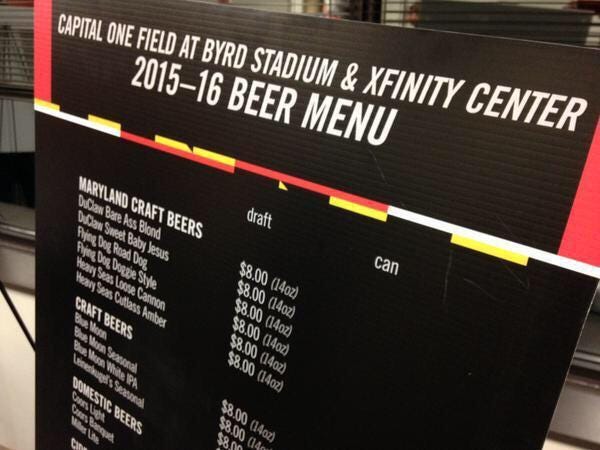 Sun – The Prince George’s County Board of Commissioners Wednesday approved Maryland’s proposal to sell beer at Byrd Stadium and Xfinity Center beginning in September.  With the approval, Maryland becomes one of the few power five conference schools to offer beer at athletic events. According to published reports, 32 of the 128 Football Bowl Subdivision schools allowed alcohol sales last season. Only five of those schools – Louisville, Miami, Minnesota, Syracuse and West Virginia – were from power five conferences. Loh also said Wednesday that both Ohio State and Texas will begin alcohol sales at home football games this fall. Maryland projects beer sales will bring in at least $500,000 annually of added revenue, proceeds that will be contributed to mental health counseling, responsible drinking programs and sexual assault awareness programs, Loh said, adding that he believed the proposal will cut into binge drinking.

At long last, the beer sales at Maryland proposal jumped through every last hoop, won every last vote, and is officially happening for this coming up school year. Beers will be flowing in both Byrd Stadium and Xfinity Center, and the timing could not be better. Maryland football is more than likely going to have a down year. Lots of starters are gone, including every WR. There is a lot of young talent on the way in, but this isn’t going to be Maryland’s year in football. But with beers in attendance, it will be a lot easier to watch.

Then basketball, oh man. Nothing will beat watching the preseason #1 team destroy the Big 10 while gulping down 14 ounce beers. Victory beer showers for everyone will be mandatory. The already raucous Maryland crowd is somehow going to be even crazier. Going to a Maryland basketball game this year is going to be nuts.

PS: It’s awesome that they are including a bunch of local beers on the list. I thought it’d just be your basic light beers, but they are really going after it. Good job by Maryland. And shut up beer snobs who are mad they list Blue Moon under “craft beers”. Who cares what they call them. Beer will be for sale, beggars can’t be choosers.