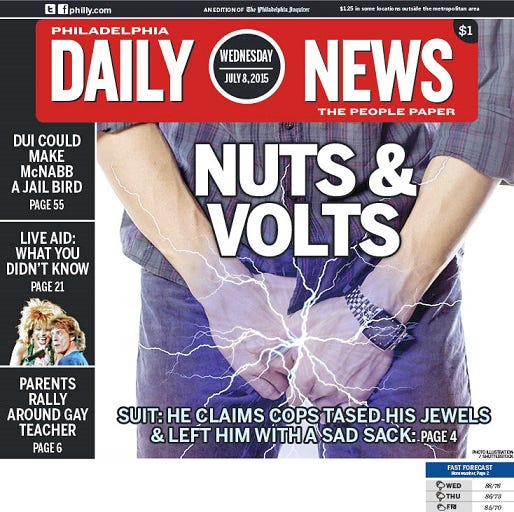 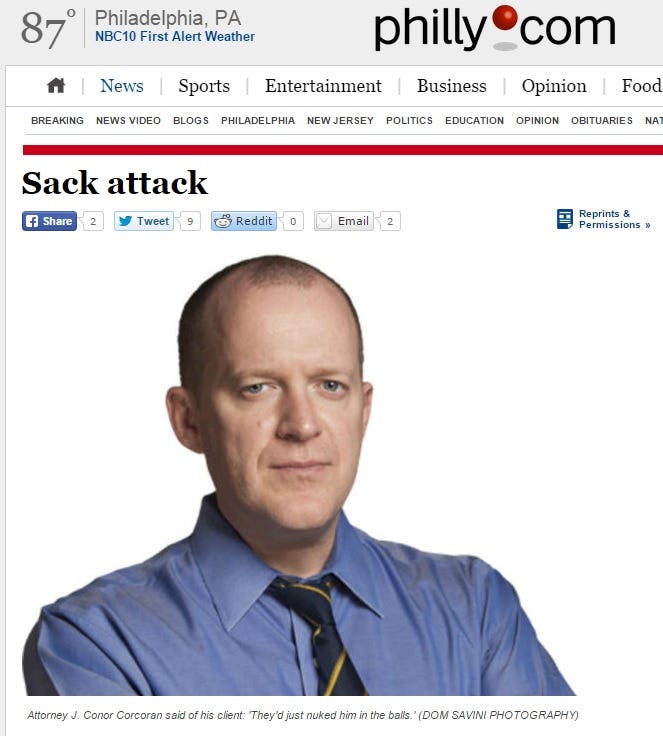 Journalism! However that caption from his lawyer saying “They’d just nuked him in the balls” is textbook comedy.

Delco – A Delaware County man has filed a federal lawsuit claiming that the cops who arrested him for public drunkenness in 2012 were real ball busters because they tased his testicles while he was handcuffed in the back of a police cruiser.

In the suit, Kiyean Brown, 30, of Glenolden, claims that the lasting effects of the tase to his testes are driving him nuts, but an attorney for one of the defendant officers says the claim is poppycock and that the officer tased Brown in his thigh, not his gonads.

Brown is seeking more than $1 million for the damages he claims to have suffered to his family jewels. The suit, which was filed in October, is scheduled for a settlement conference next month, according to court records.

The incident in question began when police were called to a fight at the Red Lantern Tavern in Glenolden about 2 a.m. Nov. 10, 2012.

Brown was at the tavern that night and was drinking, but his lawyer, J. Conor Corcoran, claims his client had nothing to do with the fight and left the bar to avoid trouble.

While Brown was walking home, he was stopped by then-Glenolden Officer Joseph Juisti who claimed Brown was “yelling and screaming obscenities,” according to Brown’s arrest affidavit.

“My client starts to curse him out under his breath, which the cop deserved,” Corcoran said. “And because my client took up his First Amendment rights and basically told him to go f— himself, they arrested him.”

Other cops arrived and tried to place Brown into custody for public drunkenness, but he became “combative” and it took five officers to handcuff Brown and put him in the back of a patrol car, the affidavit said.

However, while Brown’s buttocks were in the car, his feet dangled outside of it. Police claim that Brown kicked one of the officers in the shin, but Corcoran said it was an inadvertent kick that occurred as Brown was trying to do what police ordered him to and get his 6-3 frame in the car. The officer was not hurt.

Following the kick, Brown was dry-stunned with a Taser by Ridley Township Officer Matthew Rowan. Dry-stunning is when a Taser is placed directly against the body as opposed to deploying the wire prongs.

Attorney Robert DiDomenicis, who represents Rowan on behalf of Ridley Township, said Brown was dry-stunned once in his thigh for three seconds, not in his testicles, as the suit claims.

As a result of the incident, Brown was charged with aggravated assault, resisting arrest and public drunkenness. He eventually pleaded guilty to simple assault and resisting arrest.

Corcoran said his client only pleaded guilty to escape the aggravated assault charge, which could have led to jail time.

“He could have done time for something as simple and innocent as complying with a police officer’s request,” Corcoran said. “It wasn’t smart to roll the dice on this. He could have gone away.”

But DiDomenicis said Brown’s guilty plea proves that he wasn’t complying with officers’ requests, so they were well within their right to tase him. “You wouldn’t use a Taser on someone who is passive,” he said.

Corcoran said his client faces a host of troubles as a result of the tasing. He claims Brown’s scrotum was cauterized, that police “burnt a hole in his nuts” and that Brown has had a hard time controlling his bladder ever since.

When asked if his client shouted racist remarks at the police during the incident, as the arrest affidavit claims, Corcoran said he doubted it.

“If my client said anything racist to them, they’re lucky that’s all he said,” Corcoran said. “They’d just nuked him in the balls! If somebody does that to you, you can call them whatever you want. That’s my opinion.”

We’ve got a Delco on the loose with a burnt hole in his scrotum! Just when you think a story couldn’t give you enough it gives you everything and more. There’s really so much going on here I don’t know where to start. First off, there’s zero chance this guy wasn’t involved in the bar fight and exited to “avoid the situation”. None. The day you avoid a drunken melee in Delco is the day you surrender your rights to breathe. I also don’t believe he was “minding his own business” before getting boom rushed by 5 cops. That doesn’t happen in real life, either. Plus he’s 6’3 and didn’t throw out his stats in effort to prove to the cops he’s not drunk? No wonder shit hit the fan. However, no matter how much he deserved it, nobody should be electrocuted in the testicles. Nope. Especially when they’re already handcuffed in the back of a cruiser. You know how hard it is to move let alone not scream out in pain from the cuffs back there? This guy was as incapacitated as a newborn and he got 1.21 Gigawatts straight to the sack. But this guy’s Saul Goodman is right about one thing:

“If my client said anything racist to them, they’re lucky that’s all he said. They’d just nuked him in the balls! If somebody does that to you, you can call them whatever you want. That’s my opinion.”

Truer words have never been spoken.

Sidenote: Would you take a taser to the nuts for 3 whole seconds for a cool million? Of course you would. It’s a one-Mississippi, two-Mississippi, three-Mississippi of 3 sheer, unimaginable pain…but it’s also a million freaking bucks. Sadly I think I’d do a lot more for a lot less.