In September, Rone theorized that if Tyler Herro wasn't in the bubble, he'd be drowning in so much p-word that he'd have to swim to a butt. Unbeknownst to him at the time tho, was that Tyler Herro CAN NOT SWIM.

Luckily for him tho, a butt swam to him in the bubble and he's been drowning in it ever since

But anyways, back to the blog, Tyler Herro is literally unable to keep his head above water. Jimmy Butler even described him as a "black white guy" due to his lack of aquatic abilities.

Now I will not condone playing up the stereotype that black people can't swim. Zah was a nationally ranked butterfly swimmer in Zimbabwe at the age of 10 for fucks sake.

Personally, I love to swim. Parents chucked my off the diving board at age 3 or 4 and I've been going hippo mode ever since. I also think it's a pivotal survival skill that everyone should learn at a young age. 71% of the earths surface is water. Imagine only being able to survive on 29% of the planet? Couldn't be me.

However, it seems like many people at my own company don't share my passion. Here are some of my co-workers that I suspect (or know for a fact) couldn't float for more than 5 minutes.

No need to explain my reasoning here.

If you can't trade water for 5 minutes when curing cancer is on the line, you definitely can't swim.

They call him the rocket not the torpedo folks. According to the man himself though, he has swam before

But in my book, if you haven't swam in the last 8 years, you no longer know how to swim. Guess when you're married to the game, it's hard to find time in the summer to take a dip. Also, I don't know a single person who has ever seen him wear shorts. Until I receive photo or video evidence of him swimming, Carrabis is being placed in the CAN'T SWIM column.

Trent has always been outspoken about his hatred for large bodies of water.

“My advice has always been to stay as far away from oceans and large bodies of water as possible.” – Trent

“#TeamNukeTheOcean rolls on. Undefeated. Get on the right side of history before it’s too late. – Trent

“How long have I been telling you people that the ocean and other large bodies of water are nothing to fuck with?”- Trent

And much like Carrabis, doesn't own shorts nor swim trunks

However, according to Trent, he CAN swim

Sorry Trent, all that proves if you know how to tweet. And your podcast hosts didn't help your case much either. 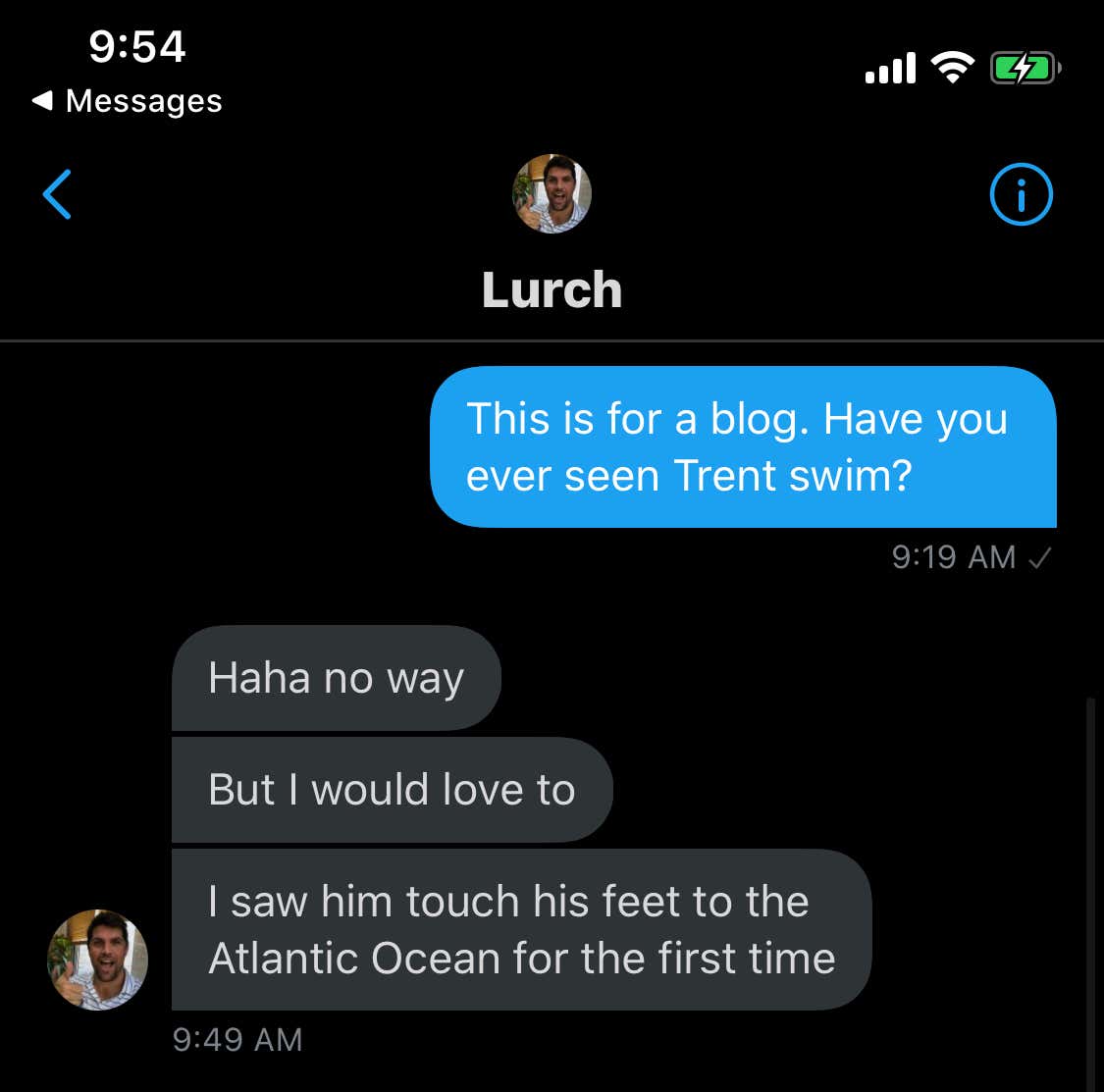 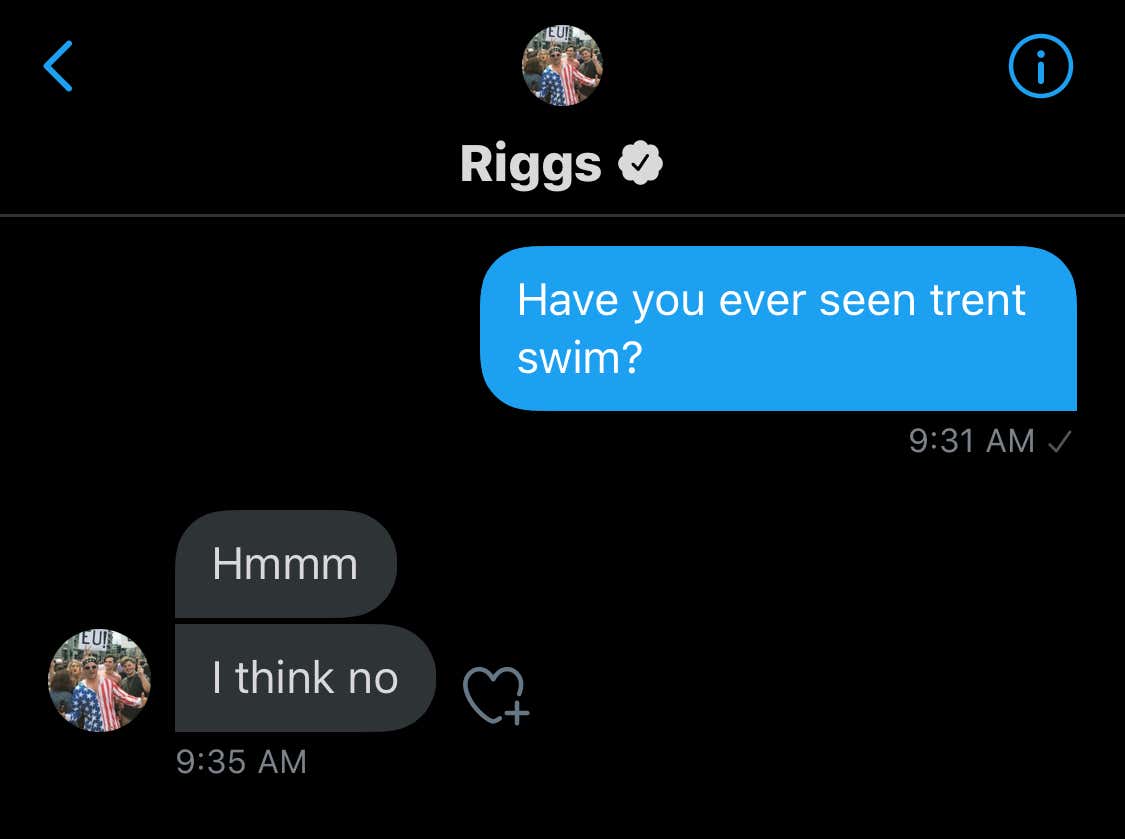 To the CANT SWIM column you go! 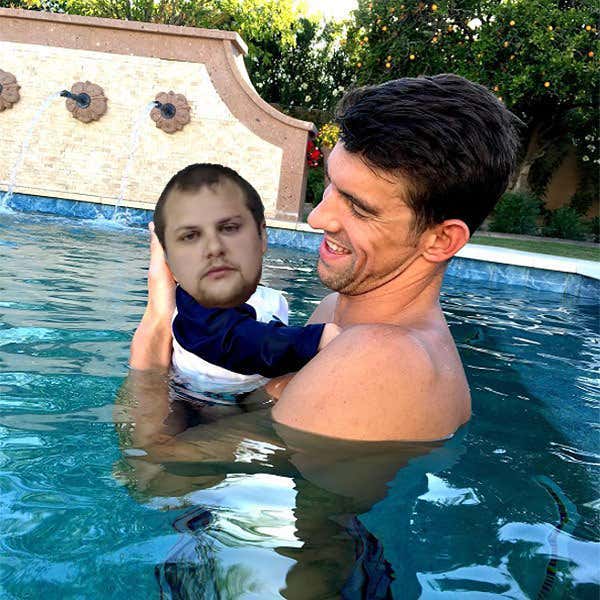 Unlike Tyler Herro who can't swim because he's a "black white guy", Nick most likely can't swim because he's a "white white guy". My theory is that he's so disgusted by his blindingly white thighs, he's never been willing to wear a bathing suit long enough to learn how to swim. I mean do you think anyone who knows how to swim would allow Vibbs to tattoo a grotesquely deformed image of a grandma on their thighs? 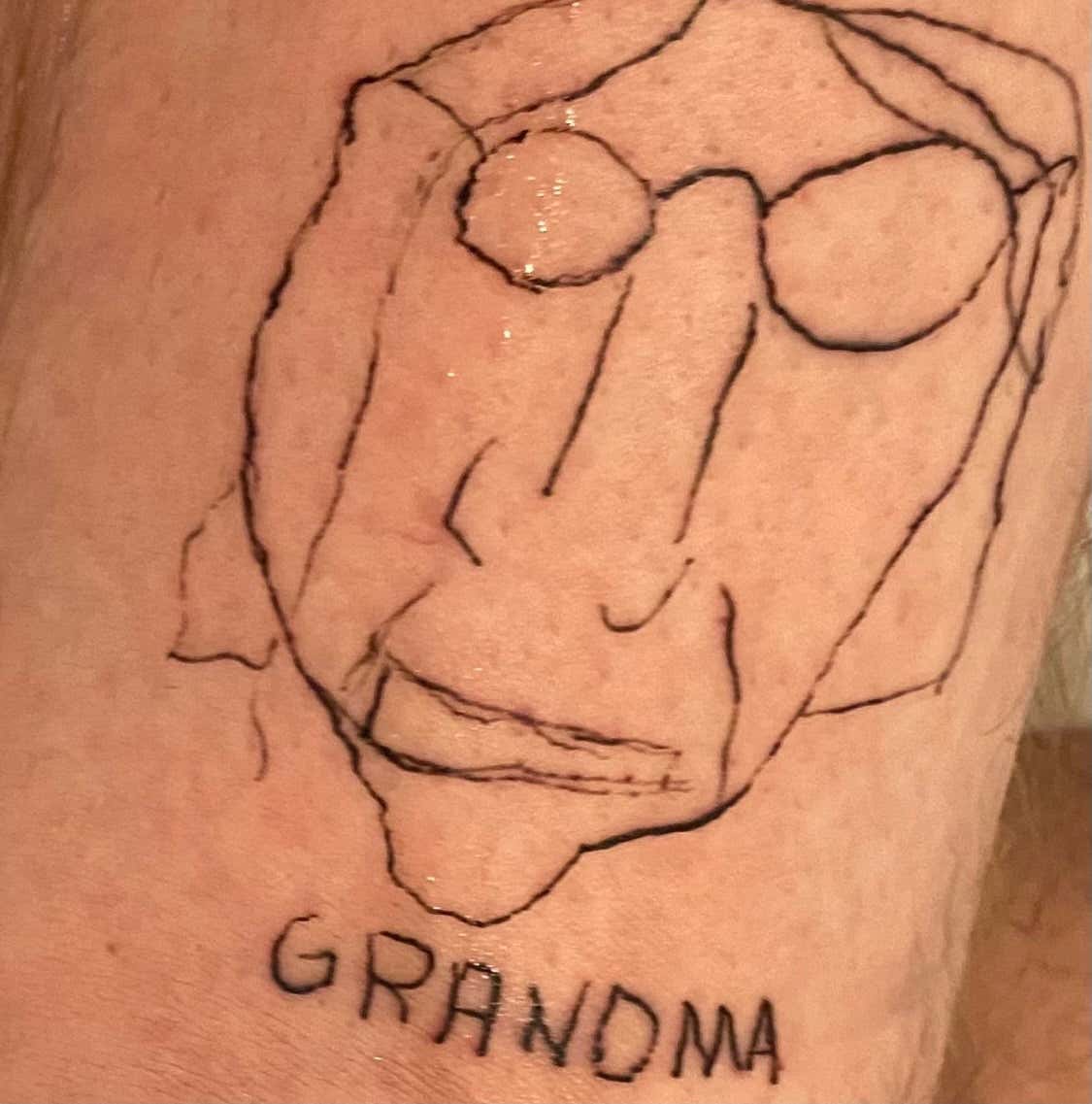 However if Nick can't swim, no one will ever have to see that tattoo besides his lovers, of which there are many. And by the time he's taking of his pants in the bedroom, it's already too late for them. Don't listen to him, I know a swimmer when I see one, and Nick Fuck ain't it. 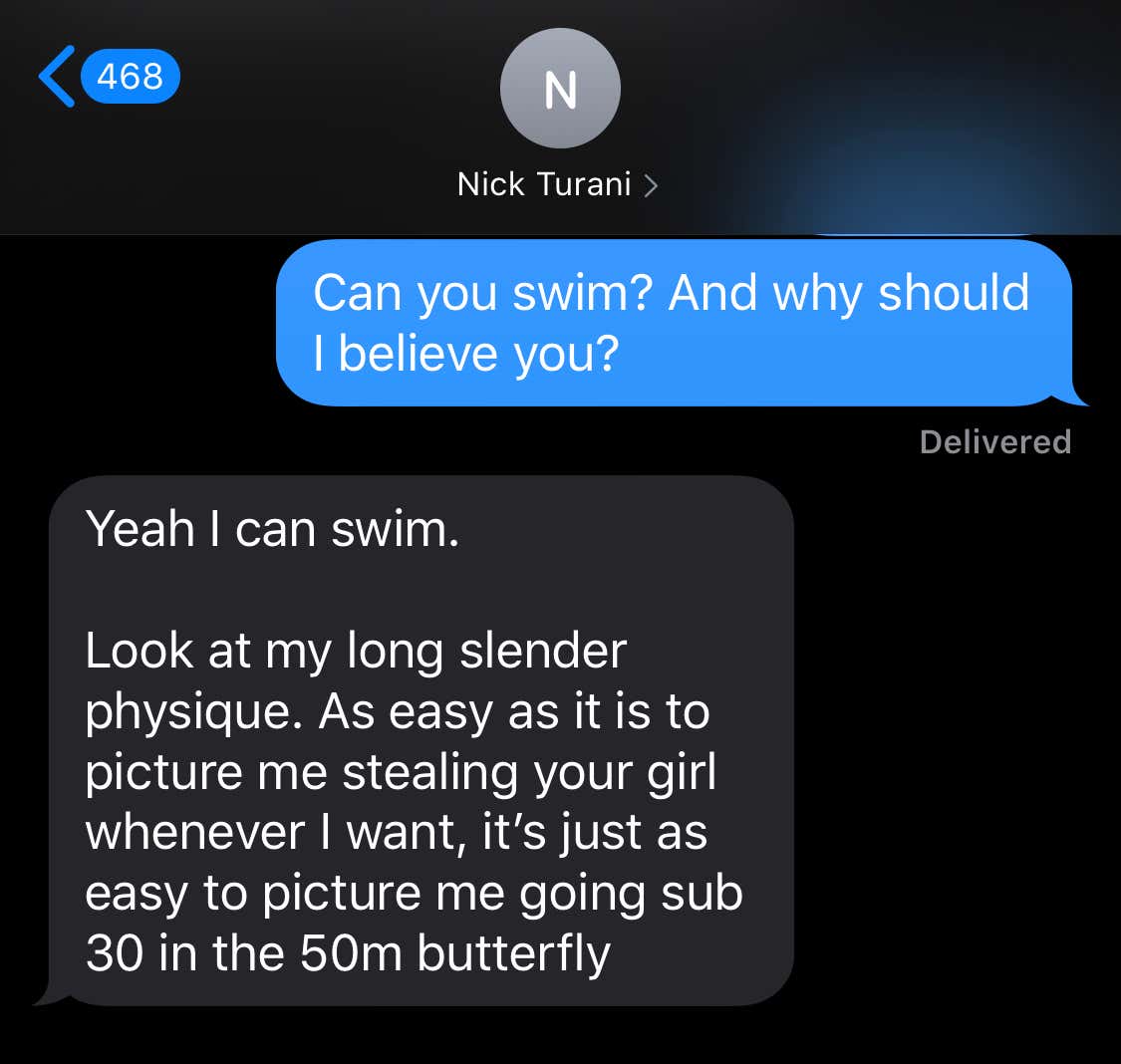 I have never seen someone look more uncomfortable in the water. It's like he's in a vat of hydrochloric acid. He's too afraid to take of his shirt off yet he's also too afraid to get his shirt wet. That my friends, is someone who deserves his rightful place in the CANT SWIM column.

(Turns out RA was actually talking about The Sandlot, a movie I have seen numerous times, so I do owe him an apology for that tweet. And he actually does know how to swim, it was just rough seas that day.)

Let's end on a positive note tho. If the pirate ship sinks, here is who I think would be able to float the longest:
1. Me 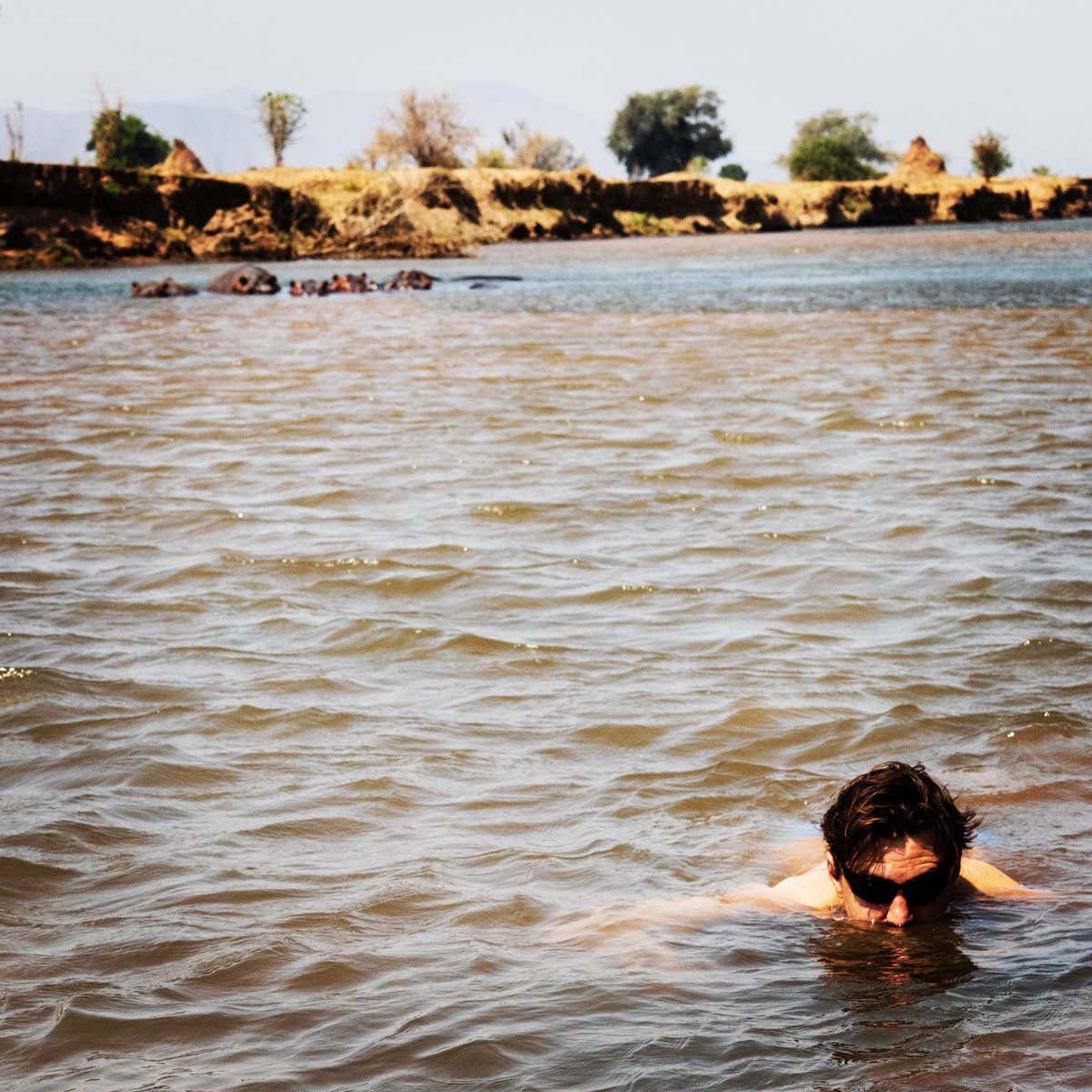 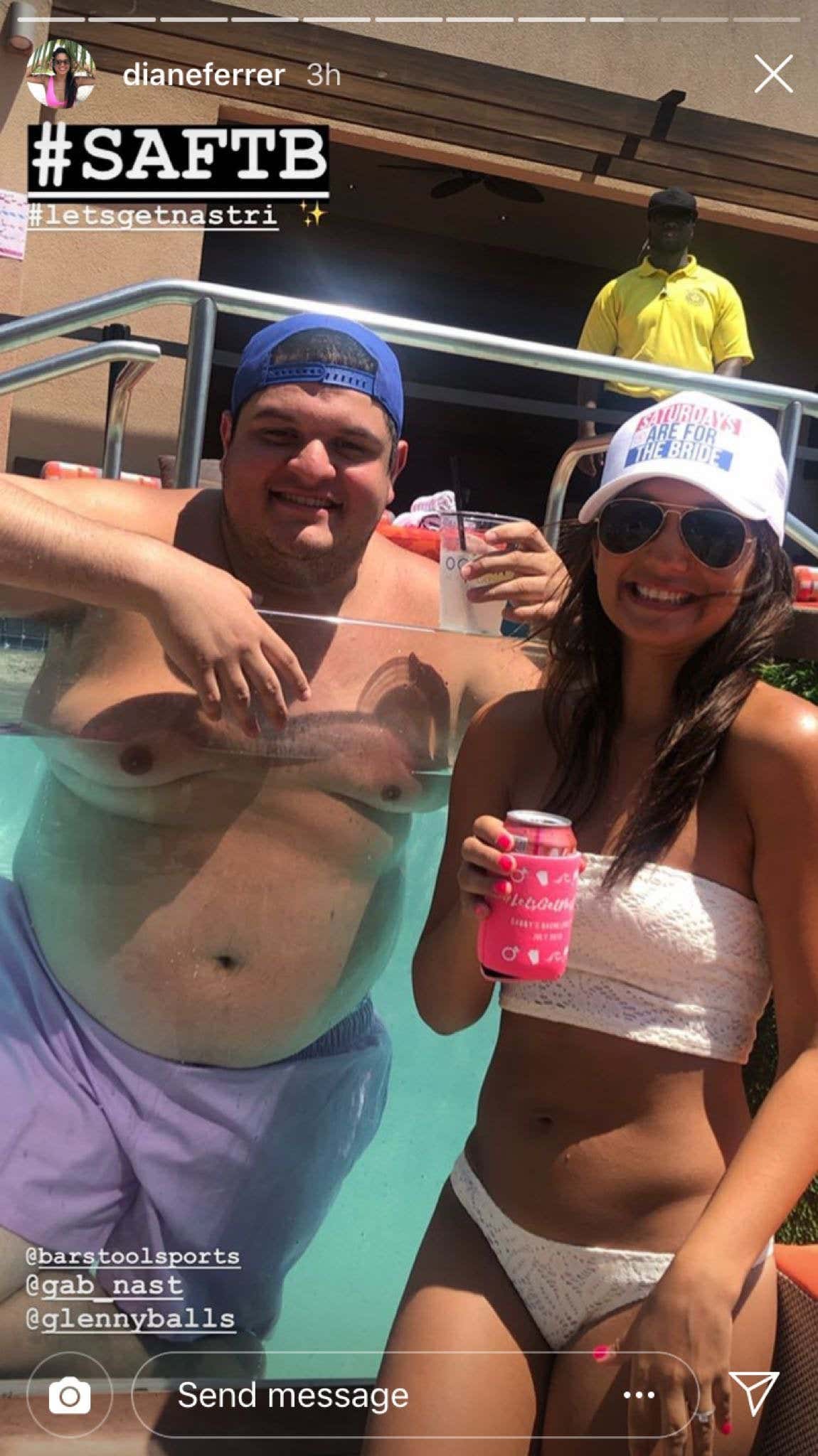