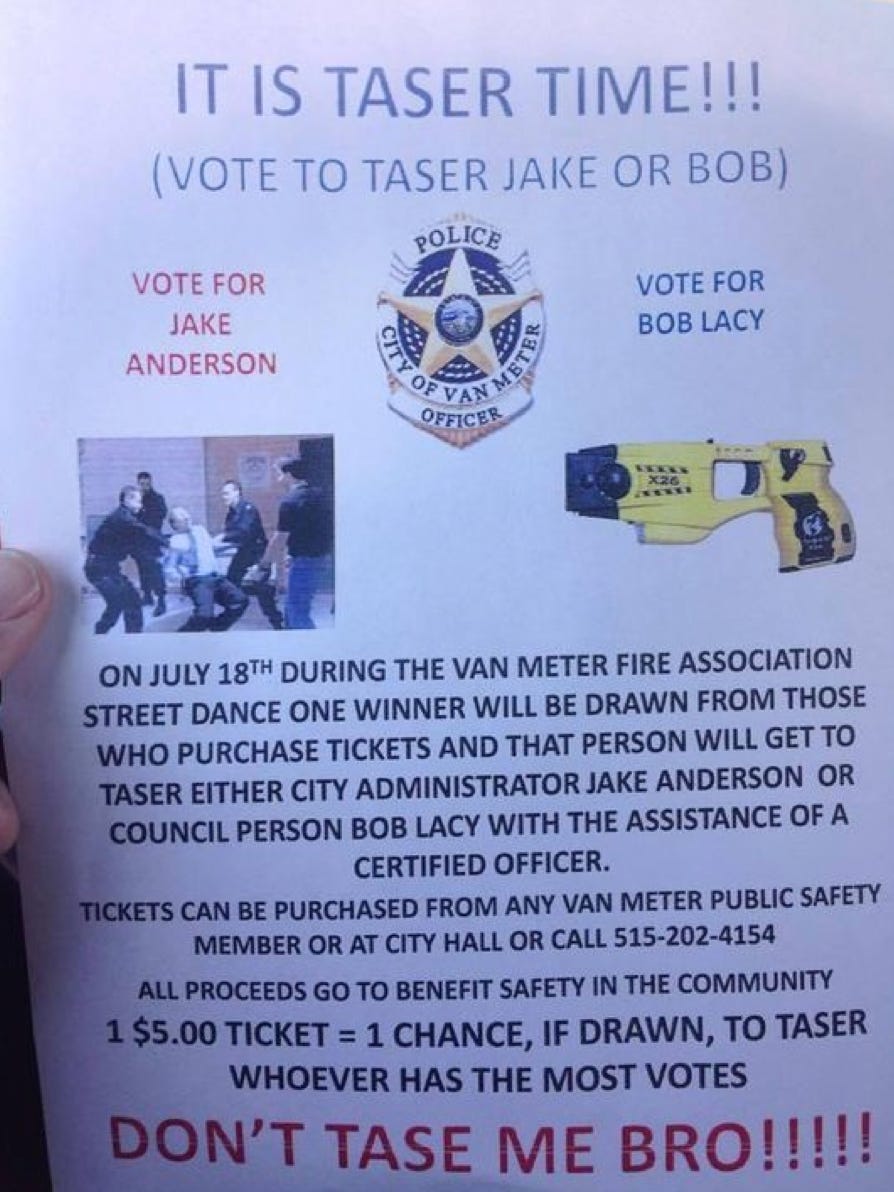 City Lab- It is, apparently, “Taser Time” in Van Meter, Iowa. The town of roughly 1,100 residents is raffling off the chance to tase one of its public officials—either city administrator Jake Anderson or councilman Bob Lacy, depending on who nets the most votes. Tickets are going for the low, low price of $5, and all proceeds will benefit local law enforcement. Van Meter police chief Bill Daggett told CityLab that the town needs the funds for a second patrol car, after one was recently wrecked on the job. “It’s about fundraising,” he says. “It’s not about ‘We’ve got to tase somebody.’” Shortly after announcing the event, the police department revised its flyer to clarify that the lucky ticket holder could opt to “save” the official by not using the Taser. Above all, Daggett says, Anderson and Lacy’s volunteerism “speaks to how much they care about the community.”

Love it.  So very Iowa.  Raising money by letting citizens tase public officials.  Not only is it very small town Iowa but it’s an awesome idea.  Think about it.  Who wouldn’t want to tase a public official?  That’s a once-in-a-lifetime opportunity.  You can’t just go around tasing city administrators.  Not unless you wanna get arrested.  Well here’s an opportunity to do it legally.  The best part is what they’re raising the money for. A second police car.  That’s right, the town only has one police car and they need another one.  Crime must be booming in the small town of Van Meter, Iowa.  Gotta keep those criminals in check.  I like how they’ve taken a minor league baseball approach to fund raising.  You know how minor league baseball teams think of the weirdest theme nights so people will hopefully come out to the park and spend a bunch of money on food and beer so the team makes a profit?  Teams will have prostate cancer night where they’ll give away free prostate exams.  Or Star Wars night or whatever.  Well that’s what this small town in Iowa has done but for government funding.  They’ve taken that formula and applied it to getting the town a second patrol car.  Come on out!  Raffle time!  Spend $5, get a chance to tase a councilman and let’s get us another squad car!  Don’t be afraid to ride the lightning.