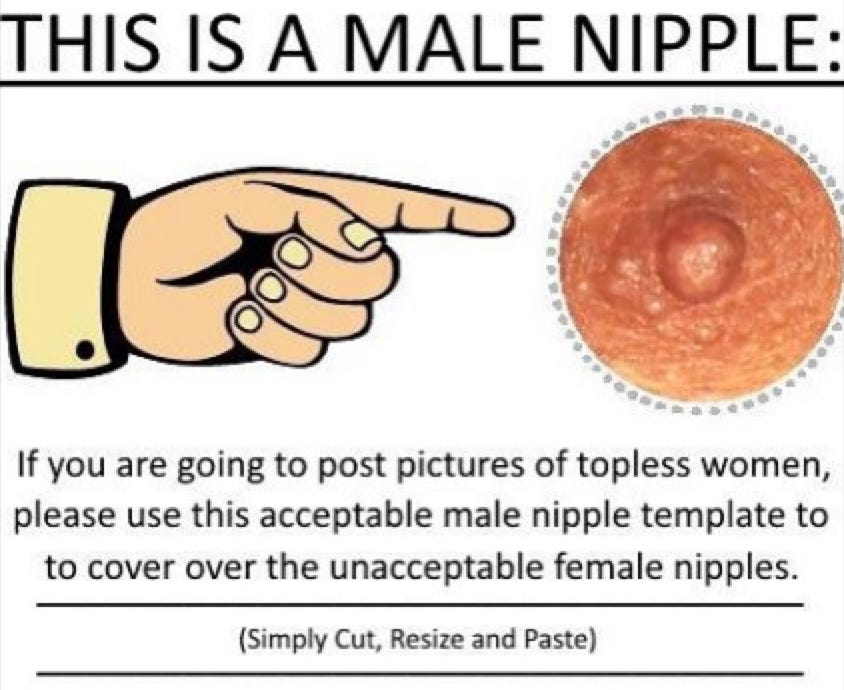 Daily Life – Women have come up with a creative way to stop social media sites taking down their topless photos. They are photoshopping ‘acceptable’ male nipples on their breasts.

The ‘Photoshop the Nipple’ idea was started by Californian artist Micol Hebron last year, but has gone viral this week after musicians Our Lady J and La Sera shared it.

Since the post took off, women have started posting their edited photos online with hashtags such as #malenipples and #freethenipple.

And here are some of the submissions. I guess they might technically be NSFW even though they mostly just look ridiculous but I’ll space them down anyway:

So in some respects these women (especially MaryKateGrams) are right. It’s kind of dumb that guys can put their nipples out there and women can’t, even if it’s an artsy thing. And I certainly wouldn’t complain if I got more tasteful female nipples in my feed. But from Instagram’s perspective, I can definitely see why they’d prefer to keep the nips safely tucked away. Granted I follow a lot of model chicks on Instagram for Barstool work but it’s genuinely to the point where I have to shield my phone when I’m out in public rolling through my feed because it’s just straight up asshole shots on top of tit shots on top of asshole shots and with my iPhone 6+ I already feel like a guy reading a Playboy magazine on a subway. If you start throwing actual nipples in there you’re increasing both my odds of embarrassment and tickets for public masturbation and no one wants that.

Ultimately I’m never going to look the nip horse in the mouth and say I don’t want them on Instagram but it’s dumb to act like there isn’t a difference between male nipples and female ones. One is a sexual object even if not intended to be, the other is completely fucking stupid and pointless and if you lost your nipple in a shark attack your life wouldn’t be any different other than a cool story on the beach. That sums up the argument. The compromise here is that tasteful artistic nude photos should be allowed but chicks just doing porn probably shouldn’t be, done and done, Judge Spags has rendered his verdict, let’s inform Instagram.

Aside: Perhaps it’s a surprise that I don’t often search “#malenipples” on Instagram for blog material but I quickly found out a pretty good example of why: