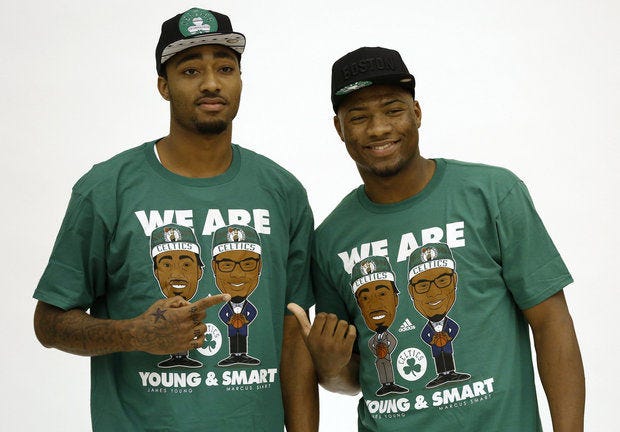 Ah Summer League. What a glorious time. Remember Summer League? Everyone had a league growing up, some better than others. You have your Drew league (ASU ASU ASU ASU), or your Rucker Park. You have your Worcester JCC or random outdoor leagues with your high school team. As you read this you are probably replaying that one summer where you “broke out”. It’s OK, we all are. The best part of summer league is that almost everyone plays well. Well, not in terms of playing beautiful basketball, but it’s like pickup with your friends you just get a trophy and a photo if you win it all.

This brings me to last night. The Celts opened up their summer league season ending what felt like a never ending wait. This summer comes with great anticipation from a certain Celtics blogger, and it gave us our first look at “raising up the draft board” Terry Rozier and Co. Also, did you hear how much bigger James Young got? 20lbs! Did he just become Lebron?

We learned a couple of things. First, Marcus Smart continues to be a monster. 26/5/8. The numbers look great but it’s more about how he played. You know he is going to give you maximum effort at all times, but his play in the pick and roll was fantastic. I probably saw more bounce passes from him last night than I did all fucking season. If he plays like this? He’ll prob be 2nd team all defense at least. There is a down side though, dude still struggles big time shooting from deep. It was comforting to see he hasn’t lost his lack of hesitation, and I’m convinced he’s missing on purpose to make people think he can’t shoot 3s for when the season starts. Savvy move. While Exum did take it to him, I was pleased with what Smart did, definitely a step forward.

Terry Rozier, maybe the most controversial pick of the 1st rd, lived up to pretty much everything you have read about him. His defense is top notch, especially on the ball. He’s long as shit, but most definitely can’t shoot. Forget where he was drafted, between him and Smart you might have the best young defensive backcourt in the league. I may be prone to overreaction but I think there is a lot to hang your hat on here. You get the feeling the guy just has a knack for the ball.

Frankly, I was a bit disappointed in what we saw from James Young. Admittedly, I am a firm believer in the #FreeJamesYoung camp. I say just give him the minutes and let him figure it out, he can fuckin shoot the ball. He teased us early

But sadly, he is WAY to similar to Jeff Green. And what I mean by that is the dude just disappears from a game. No idea where he goes, but he just doesn’t seem to really make his presence felt on the court yet. To me, 12 pts on 4-11 shooting is not a great start for the never ending hype you hear about him.

Overall this game went pretty much how you expected it to, the Celts hung in early, then eventually lost by 20. Such is the Summer league. I just think we can all agree that basketball being back is a wonderful thing.