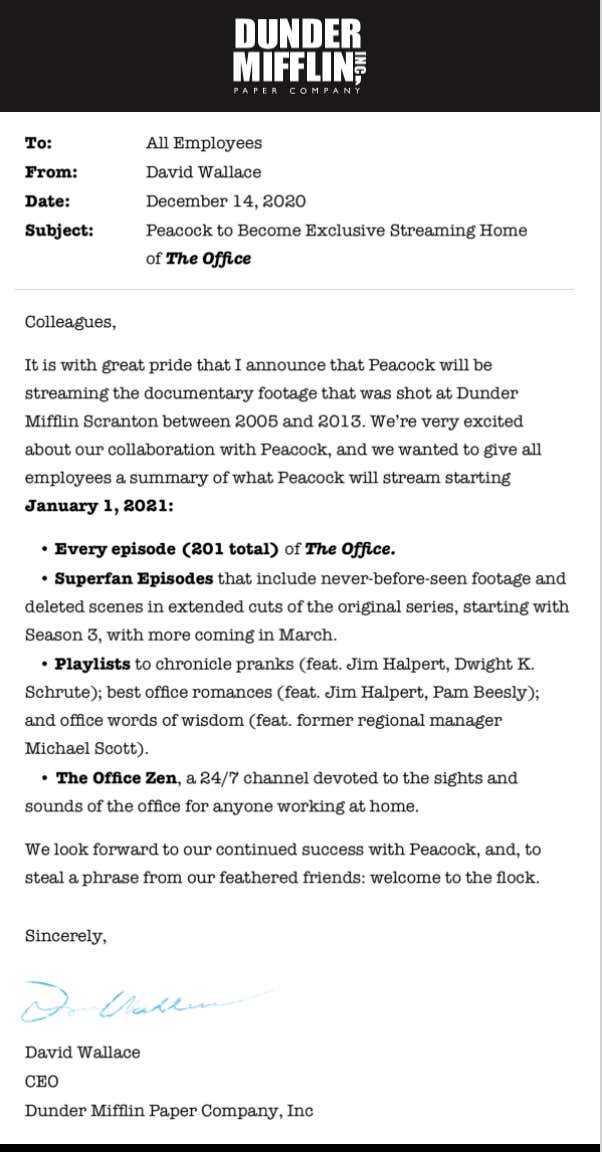 Mass email crafted by some hack PR firm sent at 4:59 right after everybody's checked out or headed for home already.

Indiewire- NBCUniversal’s streaming service Peacock offers a free ad-supported plan for subscribers, but anyone hoping to stream “The Office” when it becomes available on Peacock in 2021 is going to have to break out their wallets. According to The Wrap, NBCUniversal is paywalling “The Office” on Peacock starting in Season 3. The first two seasons of the beloved NBC comedy will be available to stream via the platform’s base free ad-supported plan, but the last six seasons will only available on Peacock Premium ($4.99 a month with ads or $9.99 a month with no ads).

“The Office” has called Netflix its streaming home for the last several years, but it was announced in summer 2019 that the sitcom would be leaving Netflix at the end of 2020. Moving “The Office” from Netflix to Peacock is a big blow to the former, where “The Office” has long ranked as one of the platform’s most popular titles. A Wall Street Journal report in 2019 claimed Netflix users spend more time streaming “The Office” than any other show on the streaming platform.

My question here isn't what do we do now? Because I know for a fact I'm not caving in and dropping another $9.99 on ANOTHER streaming service. When it'd essentially be just to watch The Office for the 3rd time through. (I attempted watching the new Saved By The Bell Reboot this weekend and the strongest edibles in the world aren't saving that one)

It feels like everybody has become conditioned like Pavlov's Dog to fire up The Office on Netflix when they climb into bed to fall asleep to, or just need to kill some time on the couch. Was that all part of NBC's plan all along? Get everybody addicted to the product then yank it and only make it available from them? Like it's Omar trimming down the crank market?

But David Wallace was nice enough to throw us a carrot-

In addition to all nine seasons of “The Office,” Peacock will also be streaming what it calls “The Office: Superfan Episodes,” extended additions of installments featuring never-before-seen content. All of the “Superfan” episodes will only be available on Peacock Premium. NBCU Chairman of Direct-to-Consumer and Digital Enterprises Bonnie Hammer said in September 2019 that even more “Office” could be coming to the streamer as its the company’s priority to get a reboot up and running.

“It is my hope and goal that we do an ‘Office’ reboot,” Hammer said. “’The Office’ comes back to us in January 2021. It is my hope that we can figure what that great reboot would be. We are having conversations… We want there to be some connective tissue to what we also have in the library.”

Any potential “Office” reboot might have to move forward without leading star Steve Carell, who left the comedy series after its seventh season. Carell has repeatedly said he’s not interested in reviving “The Office,” adding, “The show is way more popular now than when it was on the air. I just can’t see it being the same thing, and I think most folks would want it to be the same thing, but it wouldn’t be. Ultimately, I think it’s maybe best to leave well enough alone and just let it exist as what it was.”

The "Superfans" episodes sound cool, but please for the love of all things holy don't reboot this shit already. Let it breathe a little. It still stands up timewise. There's nothing in its league currently on TV but that doesn't mean you have to bastardize it like everything else nowadays just to make a buck.

It was blogged earlier today that the guy that plays Kevin, Brian Baumgartner, pulls in a million pre-tax this year from doing Cameo's (shout out Steve and a GREAT Chicago company), which leads me to believe these guys didn't get anywhere near what the Seinfeld and Friends crews did in terms of residuals.

(sidebar 1 - great for Brian Baumgartner. Get that money. I met Brian at a Celtics Knicks playoff game back in like 2011 and it was the biggest mind fuck ever. He couldn't have been further from the character he played on tv. Huge basketball nerd and monster Knicks fan. Sad. Also a huge Beastie Boys fan. Brought his kid to sit courtside to see KG call Landry Fields his little bitch for 48 minutes. Seemed like a great guy though

sidebar 2- if Kevin is making this much and charging $200 a pop can you imagine how much Dwight (Rainn Wilson) could get away with? I'm guessing $400-500 and it would be worth every penny. If I could Dwight bomb people with recorded messages of my choosing you better believe that would be happening anytime I needed to acknowledge a birthday, engagement, or baby's birth. Somebody tell Rainn to get in the game. He's leaving millions on the table.)

Speaking of residuals, I'm guessing NBC learned their lesson twice with Seinfeld and Friends after both shows hit syndication and started earning their stars hundreds of millions of dollars.

Not sure there's ever been a more one-sided deal in the history of deals than the one Jerry Seinfeld and Larry David struck with the rest of the cast. Bonkers

p.s. - cut the cord on cable last year and now between all the individual streaming services I pay subscriptions for I’m paying twice as much as I was for cable because I’m a moron.