A lot of stupid shit happened here in the States over the weekend. A man killing himself while trying to light fireworks off his head? Dumb. A man getting eaten alive by an alligator after ignoring multiple warnings that a giant alligator was in the water? Dumb. But as much as we’d like to think those two things were preventable, the reality of the situation was that they were not. In this life, there are always going to be people who just can’t stop won’t stop doing stupid shit. It’s just in their nature to be that way. Sure, you can laugh at them for dying in some of the dumbest ways imaginable. But you can’t fault them for going hard in the paint. This moment right here from Portugal, however? Well this was 100% an avoidable situation. Because guess who didn’t get trampled and gored and possibly killed by a bull this weekend. Anyone in America because we aren’t a bunch of dumbasses who think it’s a good idea to bring a bull to the party.

Whether your biggest mistake from this weekend was getting way too drunk and texting your ex or jumping into some alligator infested water, at least you’re from the United States of America and not bumblefuck Portugal where getting shitfaced and trampled by bulls is considered a casual day drink.

P.S. – We’ve all had this exact reaction before watching one of your boys be the biggest clown at the party. No words needed. Just “wtf, man?” 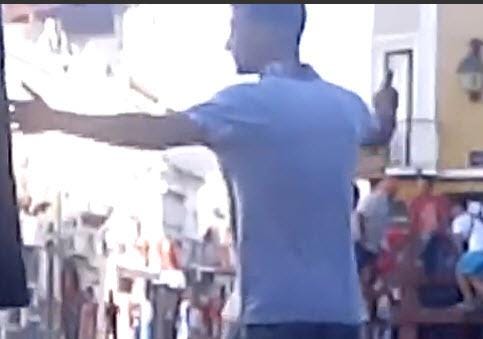