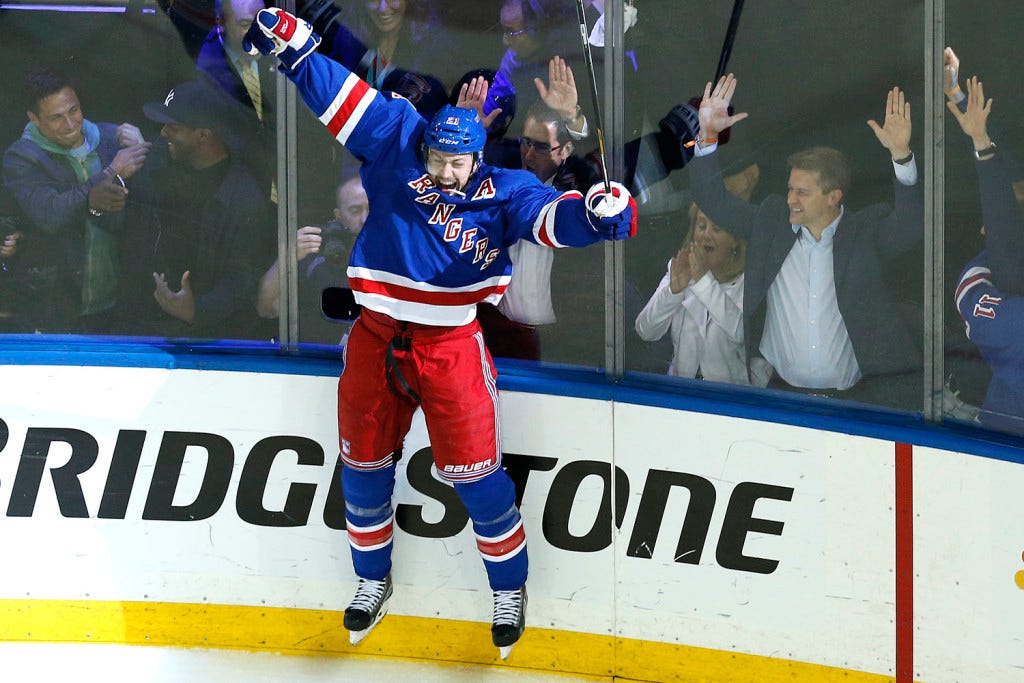 No one expected the Rangers to make a big splash this off-season. The Cam Talbot trade was no surprise & replacing him with Antti Raanta for $800k is as good as it gets. The reality was there was gonna have to be another move made to accommodate signing their crop of RFAs though – namely Derek Stepan long-term. Many thought Kevin Klein would be packing up, but his importance to the team as a right-handed defenseman seemingly didn’t match the market for him & his $2.9M cap hit.
Carl Hagelin ended up being the odd man out with expectations of over $3M/year needed to keep him in NY and, while he’s certainly a valuable bottom-six forward, Jesper Fast is a younger, cheaper replacement. The move made sense & allowed them to acquire a couple of big, fast wingers from the bargain bin in hopes at least one of Emerson Etem & Viktor Stalberg can step in with a responsible 40-point season. After bringing back Rafael Diaz for $700k as insurance on the blueline, the Blueshirts newly-promoted GM Jeff Gorton was left with a little under $11M to wrap up Stepan, Fast, Miller & newcomer Etem. That seemed reasonable with rough estimates of $1.5M each for Fast/Miller/Etem & the rest (a little over $6M) for Step. But contracts for Brandon Saad ($6M/per) & Ryan O’Reilly ($7.5M/per) have given the Stepan camp Kool-Aid smiles.
Rewind back to September of 2013. Stepan, then just 23, held out of training camp for a long-term deal. Sather could’ve locked him up for no more than $5M/per, but because the Rangers gave an underwhelming Brad Richards one more year before buying out his awful contract they simply didn’t have the money. Eventually, they agreed to a 2-year bridge deal knowing this day would come…but “this day” was only supposed to cost NY around $6M annually. With a less-proven winger in Saad pulling that AAV while O’Reilly, as close to a carbon copy of Stepan as there is, cashed in at $7.5M the price tag for the 25 year-old two-way center with 80 games of playoff experience just went up.
Considering he held out at 23 & “gave in” to a lesser deal there’s little reason to believe Stepan is planning on offering a discount this time around. Now, O’Reilly’s deal was an extension that kicks in next year – his first UFA-eligible year. His $6M salary for this upcoming season is what will matter for arbitration if NY & Step go that far (which rarely happens). What O’Reilly’s 7-year haul impacts is the long-term deal both sides want.
In today’s market, if there’s a long-term agreement to be reached, the Rangers will most likely have to pony up more years to keep the AAV under $7M. If they believe Stepan is still getting better, something like Patrice Bergeron’s deal (8 years/$55M/$6.875M per) could be on the horizon. That’d still eat into what little the Blueshirts have left to keep this year’s RFAs & they’ll be right back in this spot next year with Kreider & Hayes (although Boyle/Yandle off the books will free up $7M). Plus, a signing like this would mean the Rangers have over $48 mil tied to 8 players (Hank, Nash, Step, Brass, Zucc, Staal, Girardi, McD) for the next 3 seasons (aka the rest of Hank’s prime). Quite a commitment.
Lundqvist is in the conversation as the NHL’s best goalie. Despite his playoff shortcomings, there’s no arguing Rick Nash is an elite left winger. You can argue they’re still overpaid but they’re legitimate stars. Putting Derek Stepan in the top 15 centers on the NHL’s money list would certainly be paying it forward. He’s coming off his best season though. If he didn’t miss a month with a broken leg, he’d have posted a similar statistical year across the board as Jonathan Toews. He’s obviously no Captain Serious but the paper production is comparable. Step’s only blatant flaw – and it’s a big one – is at the face-off dot. Otherwise, he’s an asset in all situations.
I may be in the minority, but if they can ink #21 to a multi-year deal for under $7M per I say do whatever fits. Sweeten it with term & partial NTC. At 25 years old, if he continues to improve it’ll be worth it. If he levels out as a 60-point two-way center & the cap keeps moving up, an approximate $6.75M AAV won’t be as constraining. Depending on NTC, I’m sure they could find a trade partner for a locked-up Stepan in his prime if they wanted to. Sure, they could still move him if they end up with another bridge deal for his last two RFA seasons but the return will be significantly less as a rental. It’d be the best of a bad situation the Rangers are largely responsible for putting themselves in. It’s up to Step though to be realistic with the team’s situation. He’s gotta wanna be here. If he’s simply chasing the dollar, then it’s gonna be an ugly year & change before he packs his bags.