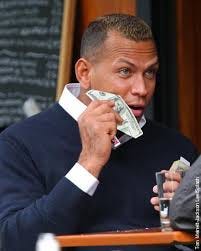 HBT – Major League Baseball just announced that A-Rod and the Yankees have resolved the dispute over Alex Rodriguez’s $6 million bonus for passing Willie Mays on the all-time home run list. Short version: only $3.5 million of it is being paid out, and all of that to charity. Here’s the statement:

“Mr. Rodriguez and the Yankees have agreed that a total of $3.5 million in charitable contributions will be made by the Club, with $1 million going to the following charities that have long enjoyed the support of one or both: the Special Operations Warrior Foundation, the Boys & Girls Club of Tampa, and Pitch In For Baseball; and $2.5 million going to the MLB Urban Youth Foundation, which will use the money to further programs and initiatives aimed at increasing youth participation in baseball, particularly in urban areas.  Commissioner Robert D. Manfred, Jr. will determine the initiatives to be supported by the $2.5 million contribution after consulting with Mr. Rodriguez, and taking into consideration the focus of Mr. Rodriguez’s past charitable contributions.

Neither party will have any further comment on the specific terms of the agreement and both look forward to focusing their energies on winning another championship for Yankees fans.”

Huge day for Arod in the eyes of PR people around the world. First he gets his 3,000 hit while letting the team get his back and make a contribution to charity, and now he skips out on a long and ugly legal battle to have the Yankees give $3.5mil to additional charities. As far as repairing his image goes, there isn’t a bigger move than giving money to veterans and troops. On top of all of it, Zack Hamples charity got snuck in here, so the Yankees just directed some of the money they were going to give anyway in order to get the ball back.

The most important thing here is “both look forward to focusing their energies on winning another championship for Yankees fans.”, because at the end of the day that’s all that matters. This team is in first place on July 2nd and about as many people thought that was possible as thought that Alex would have 15 home runs and be an all star possibility. With that comes a responsibility to put these distractions behind them and focus on the task at hand, by winning baseball games.

This is a long way from where both sides started the season, but even though George isn’t in charge, these are still Steinbrenners and they know winning is all that matters.

PS: When Busta Rhymes put out “Arab Money” I thought it was “Arod Money” because he had so much of it. Maybe Young Unsweetened can do a remix and make things right.