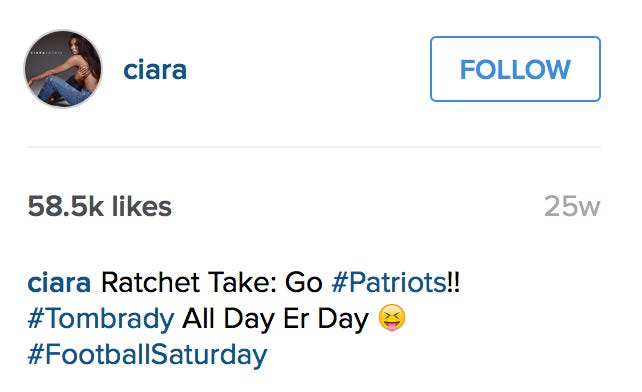 (Source) – Wilson appeared on Jimmy Kimmel Live last night and, while most of the interview featured him giving bland answers about his current contract situation and his baseball career, Jimmy Kimmel managed to get a little bit of a reaction out of him when he played Ciara’s video. Wilson laughed when Kimmel played it before admitting that he hadn’t seen the clip until recently. “That was our first argument,” Wilson said. “I saw that about a week ago.” Wilson also revealed that Ciara offered up a pretty lame excuse for why she made the video when he asked her about it. “Her response was, the following week she was cheering for the Seattle Seahawks and that she was rooting for us the whole time,” he said. “I don’t know.”

Welcome to reality, Russell! You may be one of the hot, young NFL quarterbacks. You may be dating a pop star. But guess what? There’s always a prettier girl at the party. There’s always a richer guy in the room. This is how the world works, Tom Brady is the apple of every human’s eye. Doesn’t matter if you’re black or white, rich or poor, Russell Wilson or John Feitelberg… whoever you are, your girlfriend is obsessed with Tom Brady. Tb12 is everything you ever wanted to be, he’s your wildest dreams in real life except better. You won a Super Bowl? Cool, he’s won 4. Don’t start fights with you girlfriend just because she loves Tom, it’s like starting a fight because she breathes oxygen.