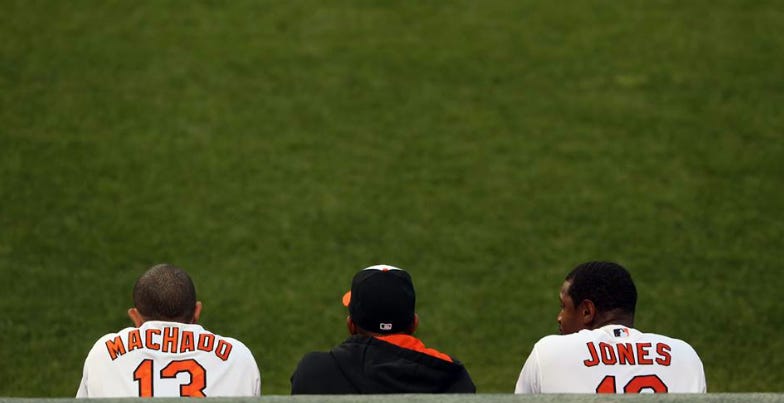 As you may have read earlier this week, the Orioles are in first place, well in a tie for first, but hey thats good enough for me right now. They were smoking hot until their bats went quiet when Texas came to town and took three of four from the Birds to finish 4-3 on the home stand after a sweep of Cleveland. Even with this bad series, the Orioles are 42-37, tied with the Yankees, and a game ahead of both Toronto, and Tampa Bay. The Red Sox? Ehh, they showed up. Now the Orioles kick off a six game road trip and have some decisions to make. Lets look at potential roster moves, injuries, and saying goodbye to a key member of last year’s team. 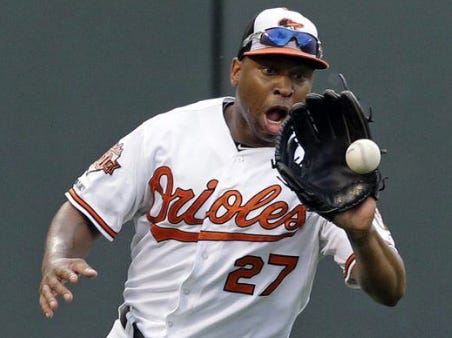 Everyone knew a move was coming, and it was going to be somebody who had a decent role on the team. Buck had mentioned on Wednesday that Tyler Wilson would be coming up from AAA and there would be a corresponding move. It seemed to come down to Steve Pearce, Travis Snider, David Lough, Delmon Young, and Nolan Reimold. Delmon got the short straw and was designated for assignment. The O’s now will look to trade him, and if there aren’t any takers he will have to pass through waivers, and he will very likely get claimed by someone. He was huge as a pinch hitter for the O’s last year, and had arguably the biggest hit for the Orioles since 1997. Has to be the loudest moment in Camden Yards history. Straight goosebumps watching this.

He came back to Baltimore after he signed a one year deal in the offseason, but wasn’t the same hitter that he was last year. Only two home runs this season in 174 at bats and those two home runs came in one game. Despite only playing 42 games in the outfield, he had eight outfield assists, good for third in the MLB, but don’t let that fool you, Delmon is a below average fielder. He ran like Cousin Terio, and it looked like he thought he got paid by the step when he was chasing a fly ball. But regardless, thanks for the last year and a half Delmon.

Jonathan Schoop Returning Soon/Will Dylan Bundy ever throw another pitch as an Oriole?

-Great news on the Schoop front, he continues to rake (hit another home run in A ball last night) and should be up with the O’s pretty soon. He’s been at Camden Yards recently working out and running in the outfield with Brady Anderson. In all the tape I’ve seen of him he looks like he’s running perfectly fine on that injured knee. He still looks great taking ground balls, rounding the bases, and planting and cutting on the knee. MASN’s Roch Kubatko reported that Schoop’s injury rehab assignment is up today, and the O’s are still discussing whether to send him down to the minors, or bring him up to the bigs and option someone else.

I’m very excited to see how he hits when he comes back, don’t forget, he looked like a totally different hitter this season compared to last season. Once Schoop comes back, the Orioles will finally have all the pieces to their lineup. They’ve been hitting well recently, and should only get better when Schoop returns.

– Stop me if you’ve heard this before. Dylan Bundy has been shut down. The O’s top pitching prospect visited Dr. James Andrews, and it was discovered that Bundy had “an unusually large buildup of calcium, the magnitude of which he says he had never seen.” This is the most Orioles injury ever. DR. JAMES ANDREWS HAS NEVER SEEN THIS. How on Earth is that possible, the best sports surgeon in the world has never seen this in all his years of doctoring, and it just happens to be on the right shoulder of the O’s top prospect. Bundy is out of options next season, so if healthy, and that’s a big if, Bundy has to be on the major league roster. Considering it’s a long shot for him to even toss a ball this season, that means he would be on a major league roster with 1 2/3 innings of MLB experience.

It seems like everything that has could go wrong with Bundy, has. First Tommy John, now this? It has Orioles fans very skeptical about Bundy, once thought to be the savior who could touch high 90s, the ace at the top of the rotation, the future of the Baltimore Orioles now seems like the forgotten man behind Hunter Harvey and Gausman. Now we are wondering if he ever appears in an Orioles uniform, or any uniform for that matter.

It’s not his fault he’s been hit by the injury bug, but if we’re being honest, I’m probably going to blame his high school coach….

474 pitches in a four-day period seems absolutely insane. Is this even legal? His coach should be taken out back and shot over that. Its a miracle the kid could sign his contact with an arm that overused. 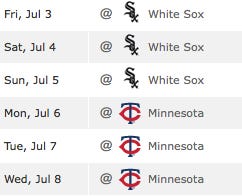 O’s embark on a six game road trip starting with three in Chicago vs John Danks, Jeff Smarasdafurisgf or whatever, and Sale. Chicago is bad, just flat out not good. They have one chance to win every 5 days, and that is when Chris Sale is pitching. The O’s must take two out of three here. Going against Chris Sale, in a day game, on a Sunday, those are three things that have given the O’s trouble in the past. It’s not impossible to beat Sale, the O’s have done it before, but it won’t be easy. Bud Norris was scheduled to start that game, sounds like he could get bumped for Miggy (I wanted to throw Gausman in there, he had me drooling during his start last night. KEEP HIM IN THE ROTATION BUCK). I’m confident the O’s take the series.

Next up is three in Minnesota. The Twins have surprised a lot of people this season, as they’re only 3.5 back of the Royals and have a 42-37 record as of today. The good news is they are on schedule to face Phil Hughes, who gives up 1.6 HR per 9 innings. Exactly the guys the O’s want to see. Two wins in Minnesota could set them up nicely for a run in the second half, and could be see them extending their first place lead.

Yours truly, JJ, and Jared Carrabis will be doing an A.L. East Podcast with the kid CharlieWisco. Feel free to tweet me or any of the other guys with any questions you have about the Orioles, or the rest of the A.L. East. Don’t ask about the Red Sox though, we don’t like kicking teams when they’re down.