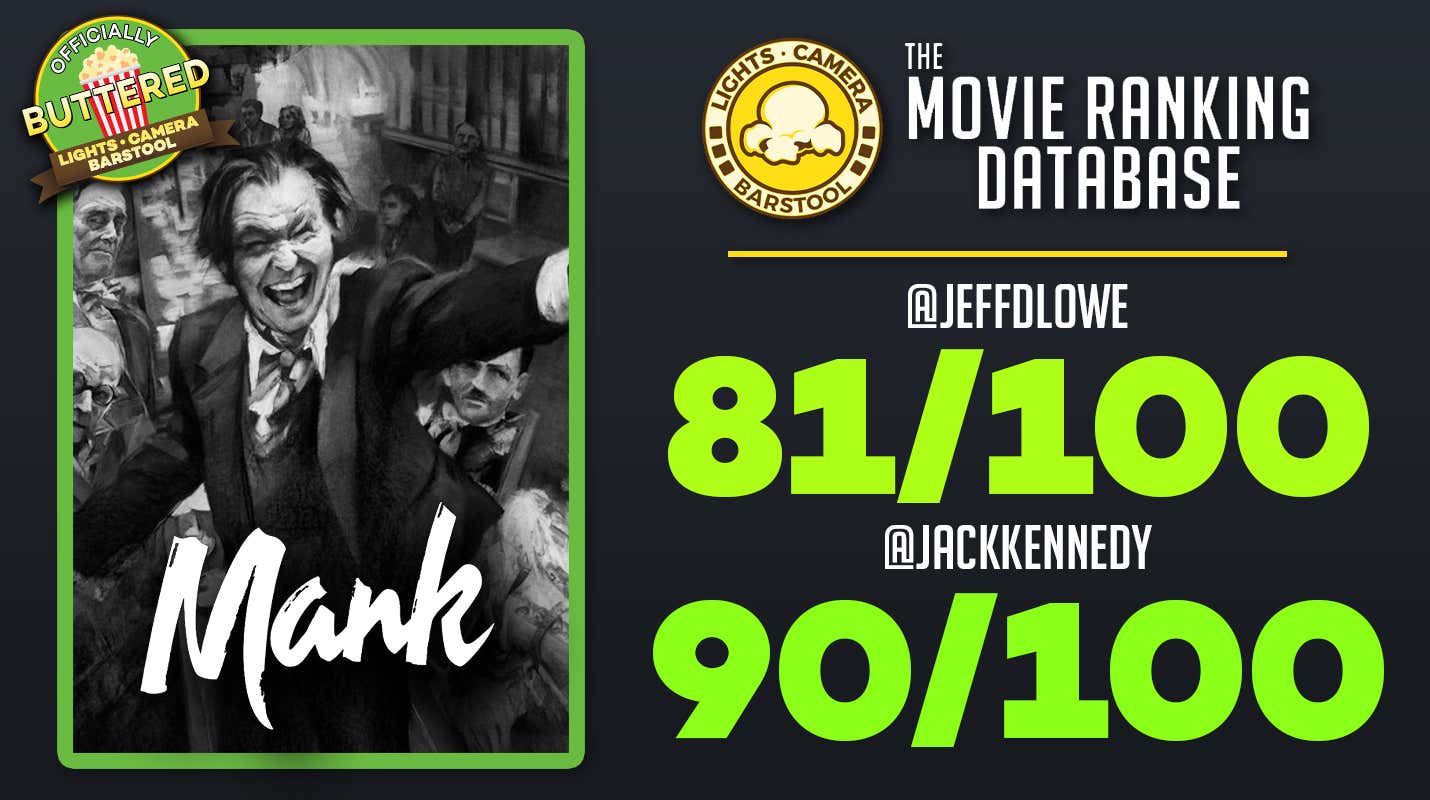 Not only did we get a new movie this past weekend on Netflix, but we also got a new movie that has real Academy Awards buzz. 'Mank' is director David Fincher's first movie since 'Gone Girl' in 2014, and a continuation of a project from his father Jack before he passed away in 2003. With movies under the felt of the younger Fincher such as 'The Social Network', 'Fight Club', 'Seven', and 'The Girl with the Dragon Tattoo', the expectations for this movie were super high…

1930s Hollywood is reevaluated through the eyes of scathing wit and alcoholic screenwriter Herman J. Mankiewicz as he races to finish "Citizen Kane." (via Wikipedia)

JeffDLowe (81/100): There is no question that 'Mank' is an awesome looking movie with solid acting and a snappy script, but it's hard to not feel as though it's a cut below the rest of David Fincher's work. With a fascinating story in tow, there is a ton to love about the deep-dive on the creative process behind 'Citizen Kane', but 'Mank' never quite delivers the big punch or moment that you'd expect from the Oscar-nominated director.

Let's talk about the good things because there is enough to enjoy the movie, even if it didn't quite live up to the hype of Fincher's other movies.

This is one of those movies where even if you don't know a ton about scripts or screenplays, you can just tell this is a fucking fantastic script. It snaps in such an appealing way that whips you around the story in a fun and engaging way. A lot of that is due to the acting too, as Gary Oldman and Amanda Seyfried absolutely crushed their roles. Seyfried has come a long way since her debut in 'Mean Girls' 16 years ago and should probably

Here is my biggest issue with the movie: there is always a moment, sometimes more than once, in a David Fincher movie that really drives home its excellence. For me, that'd didn't happen with 'Mank'.

You get a few scenes (no spoilers) that really flex the script & acting, and they drive home a solid emotional punch. But I don't think it reached that second level that you get to with the likes of 'The Social Network', 'Fight Club', or 'Gone Girl'. The movie just ultimately fell sort of flat emotionally, and that's a tough conclusion to make given the style of the movie and what it's about.

I might be overly critical of this movie due to my feelings on Fincher's other work, but, even though I liked 'Mank', it just doesn't land where I had hoped to see it when I first learned about its release. Regardless, you won't see me complain, because, in a year of delayed movies, we got a top-tier release from one of the industry's best directors. It may not be a grand slam, but 'Mank' is a movie all cinema fans should fire up on Netflix.

KenJac (90/100): If you took the name David Fincher out of the base ingredients for this movie, my expectations for this movie would have been so much lower. It's a black and white movie about making an old movie in old Hollywood and it doesn’t have a lot of star power outside of Gary Oldman and Amanda Seyfried. Once Fincher’s name is in, though, obviously, the expectations go up a lot and I think he made a great movie that is enjoyable for casual moviegoers and movie buffs as well.

I think it’s easiest to talk about this in components’. From an acting perspective, I really don’t think there is a bad performance outside of Charles Dance’s American accent which was atrocious. Oldman is obviously the star and he does drunk acting very well which is harder than I think it looks.

On the technical end, I really like a lot about how this movie was put together. The script is RAZOR sharp and extremely witty. And that script is sort of the focal point and every other aspect of this movie compliments it so well, almost perfectly. The set design immerses you into the time period, the soundtrack elevates all the big and soft moments, and the cinematography is uniquely Fincher (tracking and wide shots) but also has a lot of shots that pay homage to movies of the time.

My only complaint is that the timeline is a little hard to follow at points. That is basically it other than maybe wanting a really standout performance from someone. Other than that, he made a pretty niche movie easy to comprehend which was pretty damn Hard. This was a passion project written by his dad before he passed and I think he did his father proudly.

--
The movie is Officially Buttered, despite our low scores. You can head to Lights Camera Barstool right here to listen to our latest episode where we reviewed 'Mank' and ranked our FAVORITE Pre-1980 Movies.