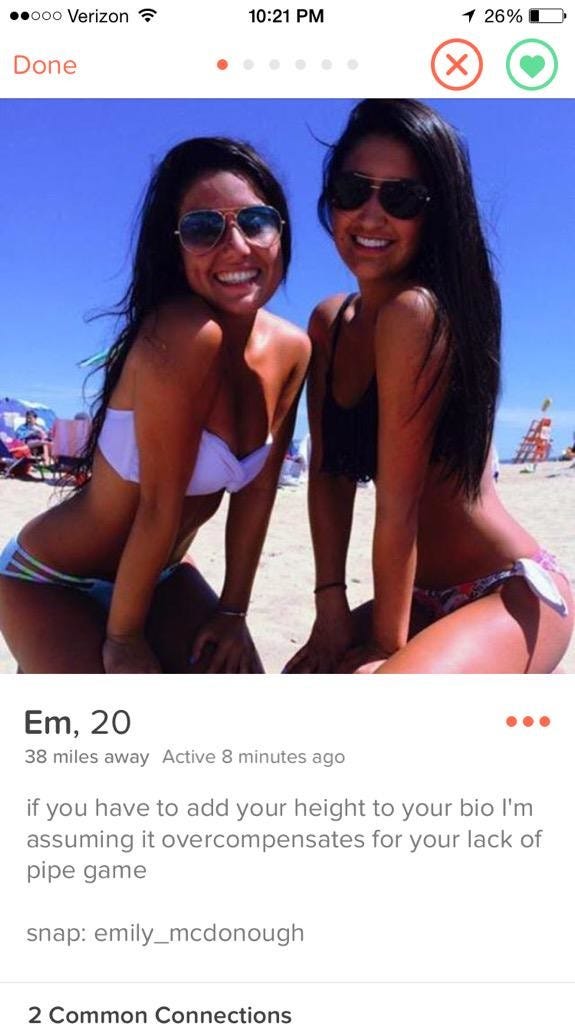 Emily’s got a point here. I don’t get why guys put their height in their bio in the first place but I always hear girls talking about so I presume it must be a regular thing. Is it only tall guys doing it? Because while I do believe you should exploit everything you have to your advantage, there are probably other ways to prove it. Like photos of you looking tall or reaching shelves or hanging out with a chick in big heels. The pictures can speak for themselves, putting your height in to show off is like writing that you have a Ferrari or you’re uncircumcised but don’t have a lot of smegma; show, don’t tell.

And so begins another Tinder Roundup, coming to you early just in time for the rare but always appreciated Summer Thursday where no one wants to be working past 3pm. Remember to follow me and send me your screenshots on Twitter (DMs are open for confidentiality) and let’s kill some time before blowing things up in the name of America this weekend. 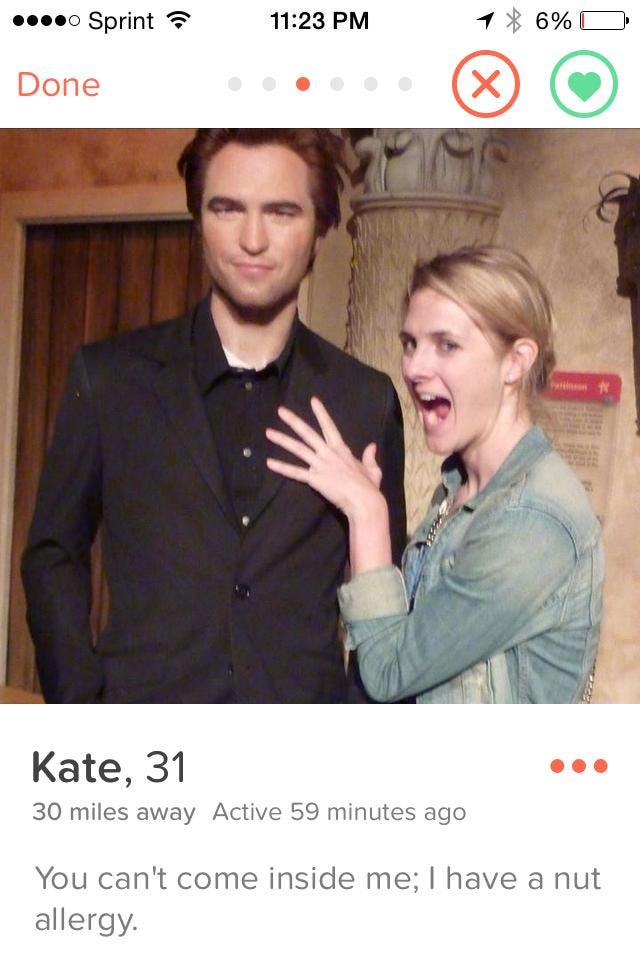 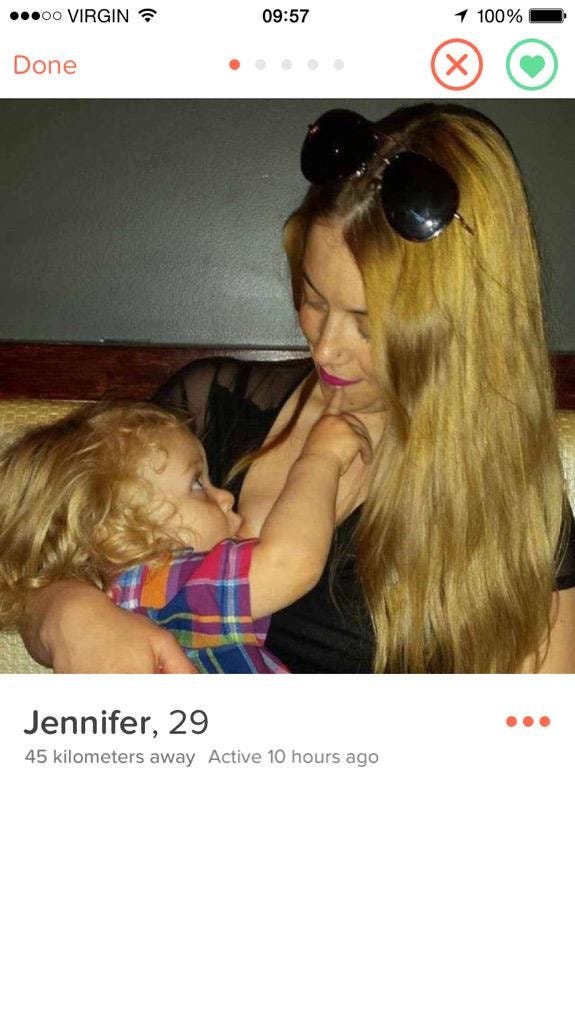 We’ve seen a lot of pregnant moms since starting the Tinder Roundup but an actual breastfeeding mom? Free the nipple and all that but not if it’s spraying curdled tit milk all over the place (via Lach) 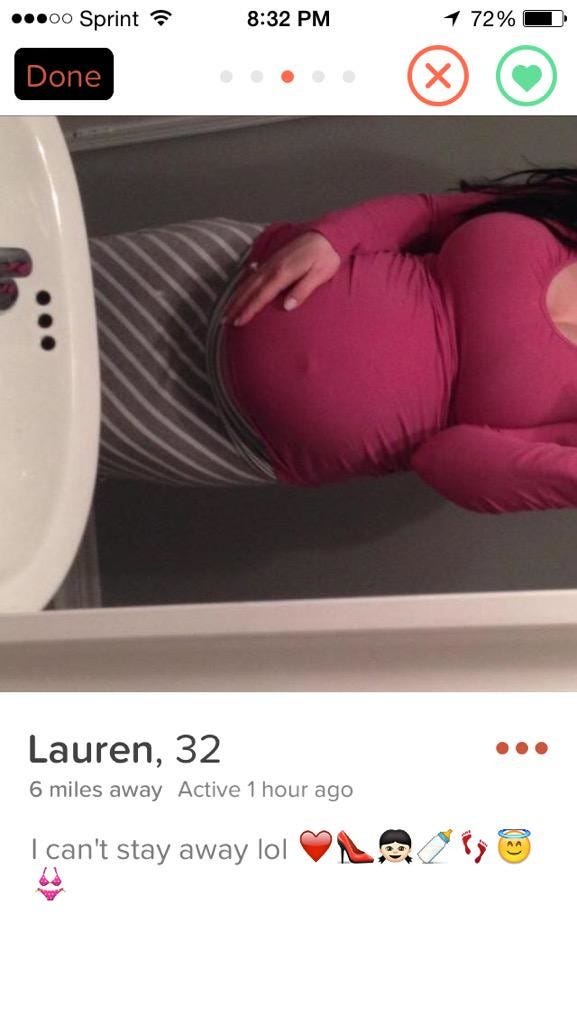 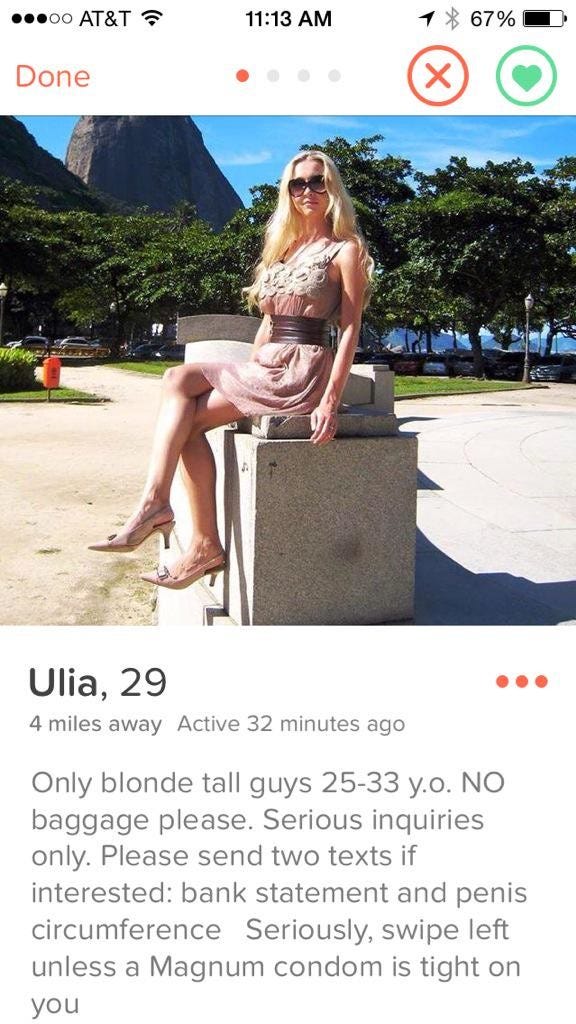 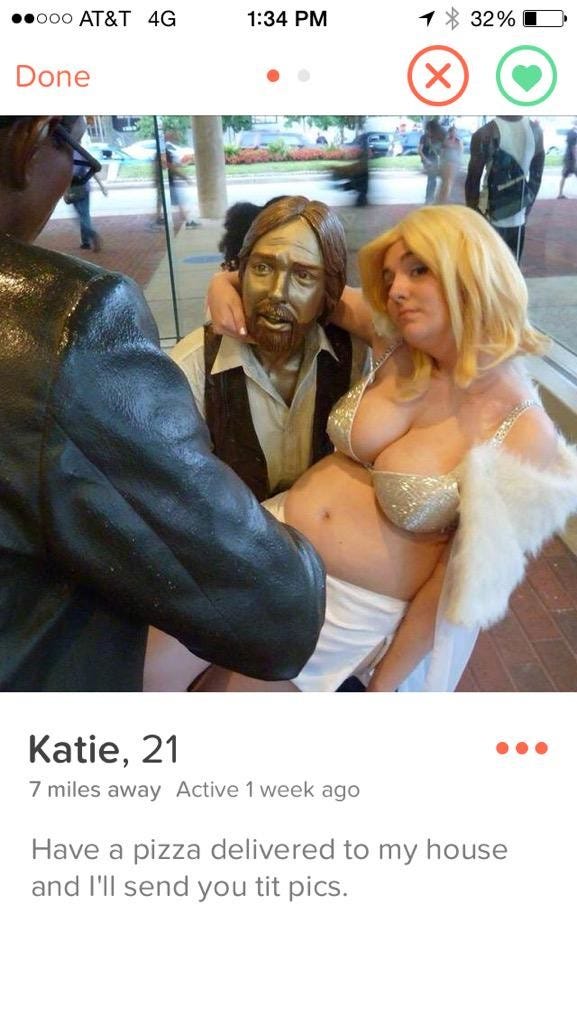 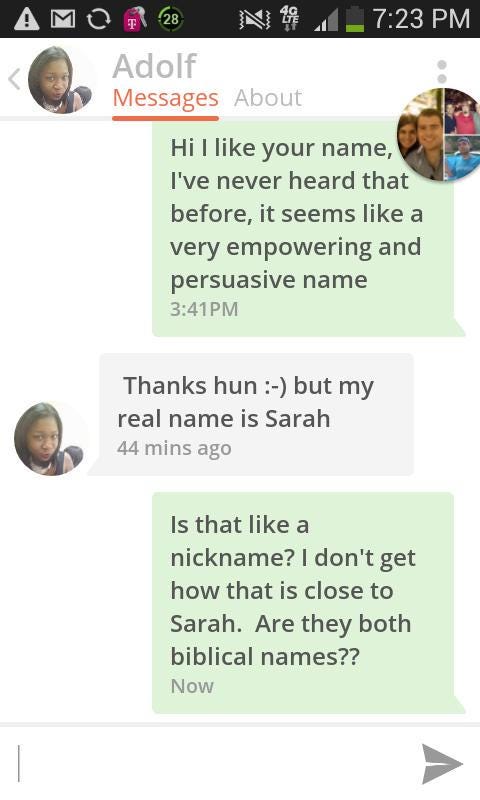 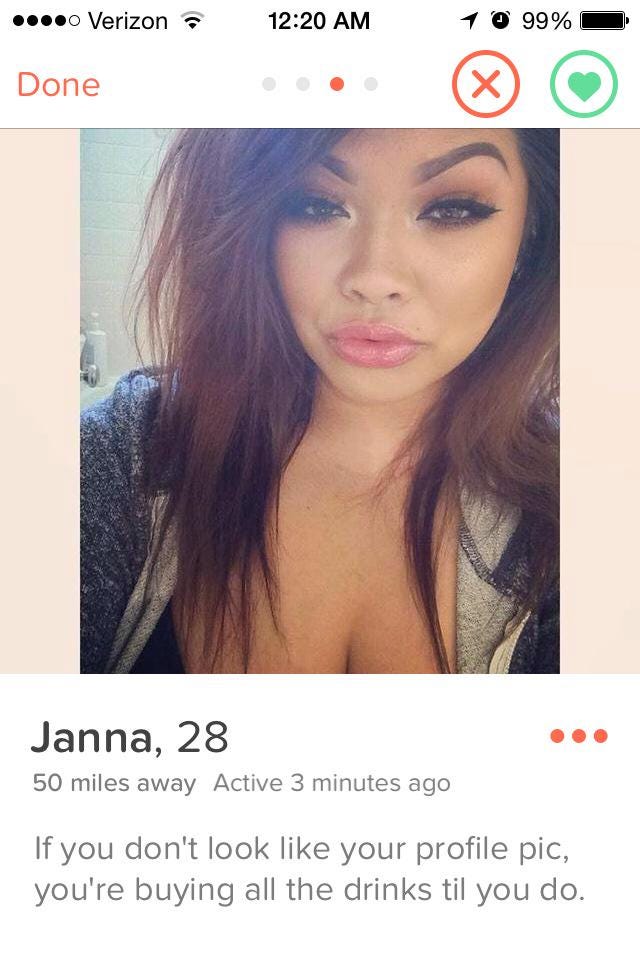 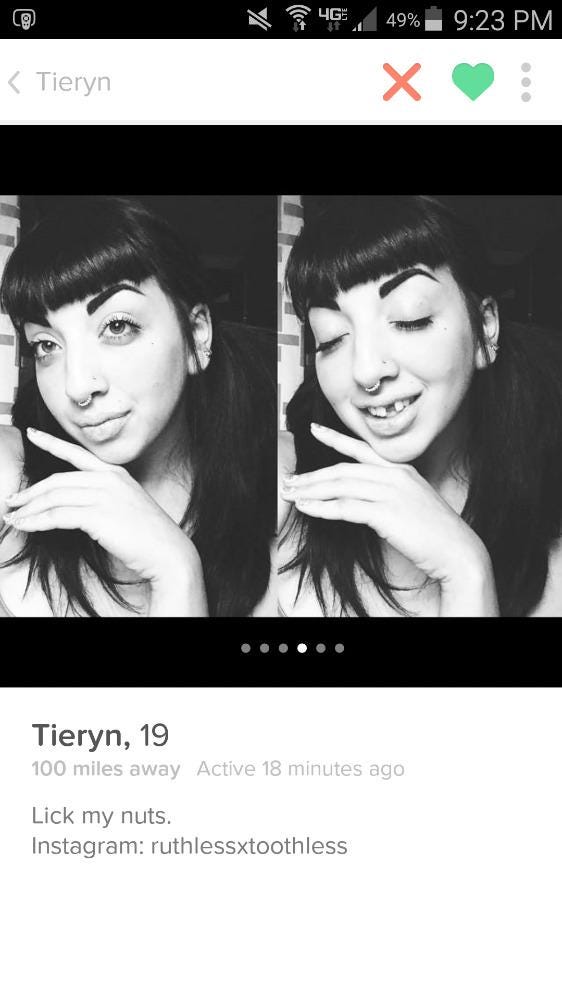 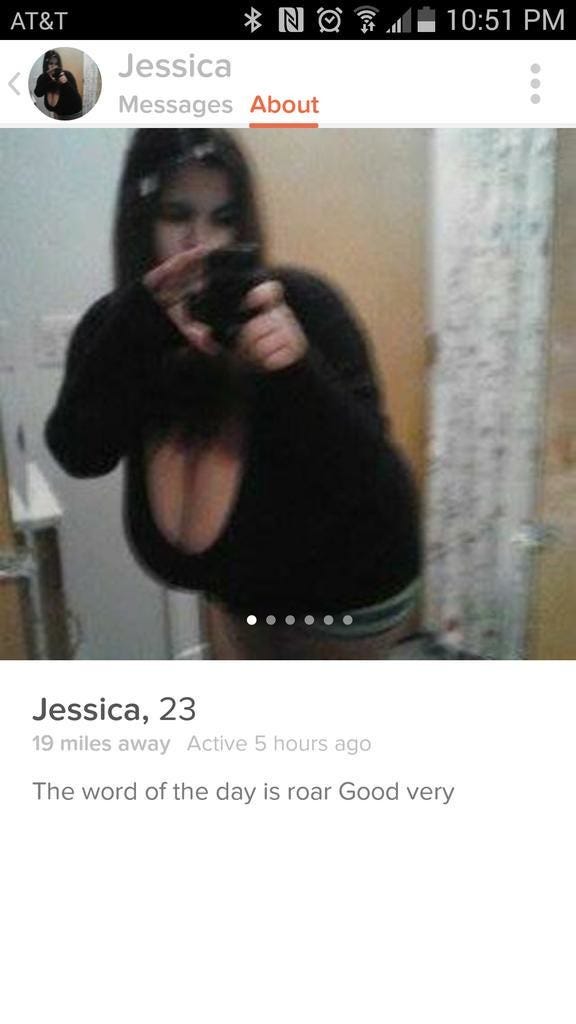 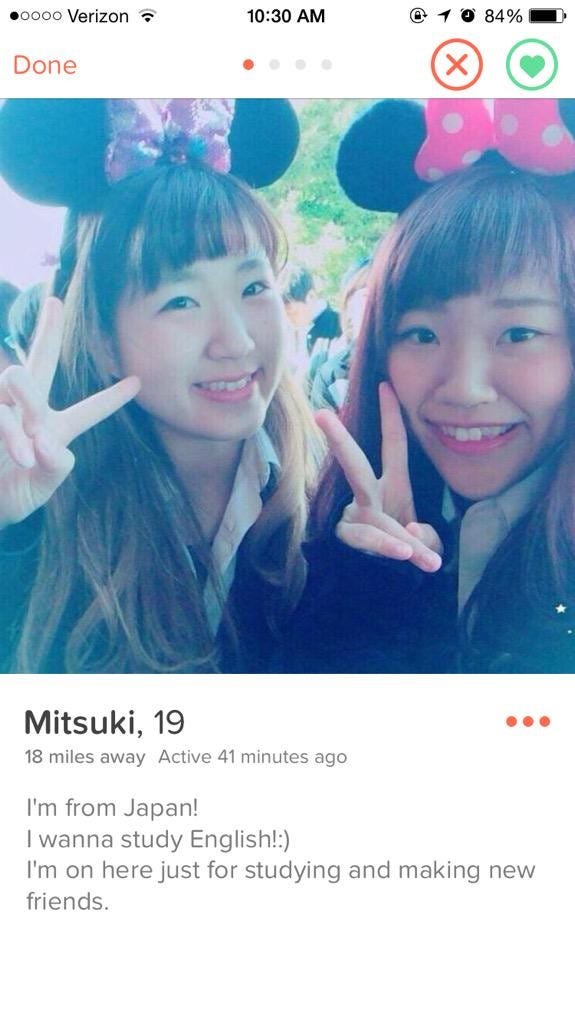 Even Michael Scott’s Asian impression at The Dundees looks at Mitsuki and goes “Damn going in a little hard on being Asian, champ, at least take ‘studying’ off your bio” (via JM) 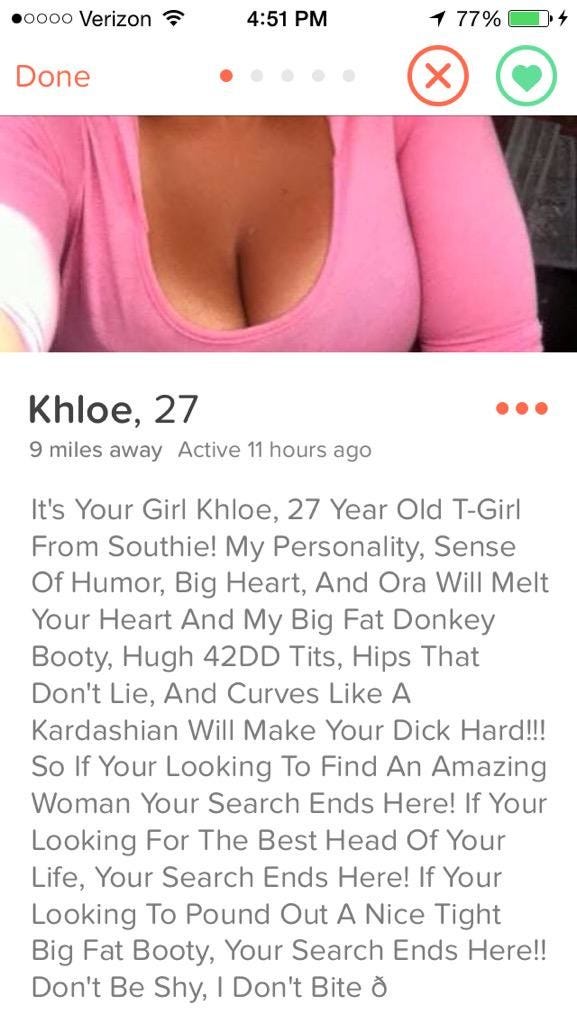 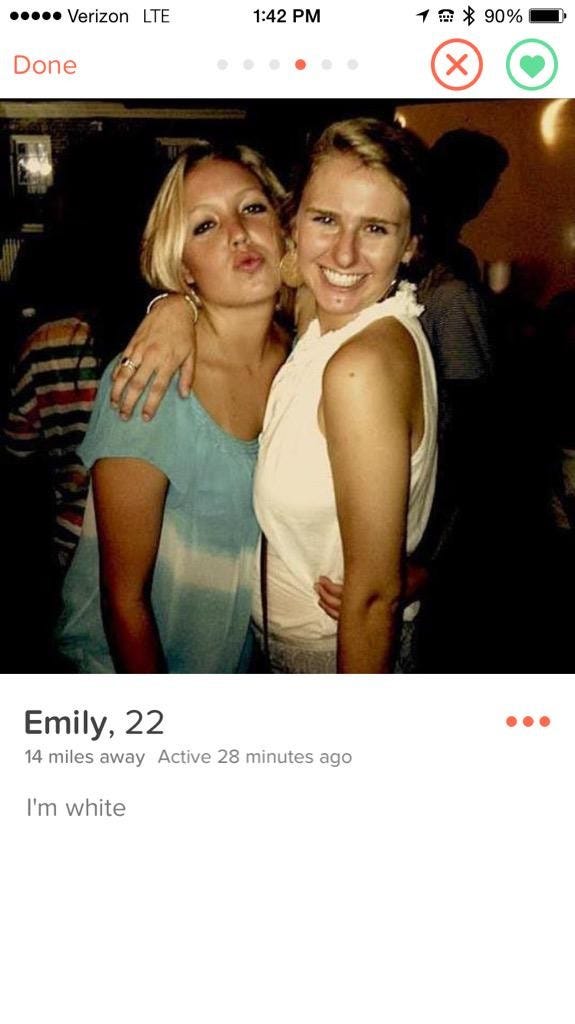 Well thanks for clearing that up, I’d have no idea otherwise (via NMC) 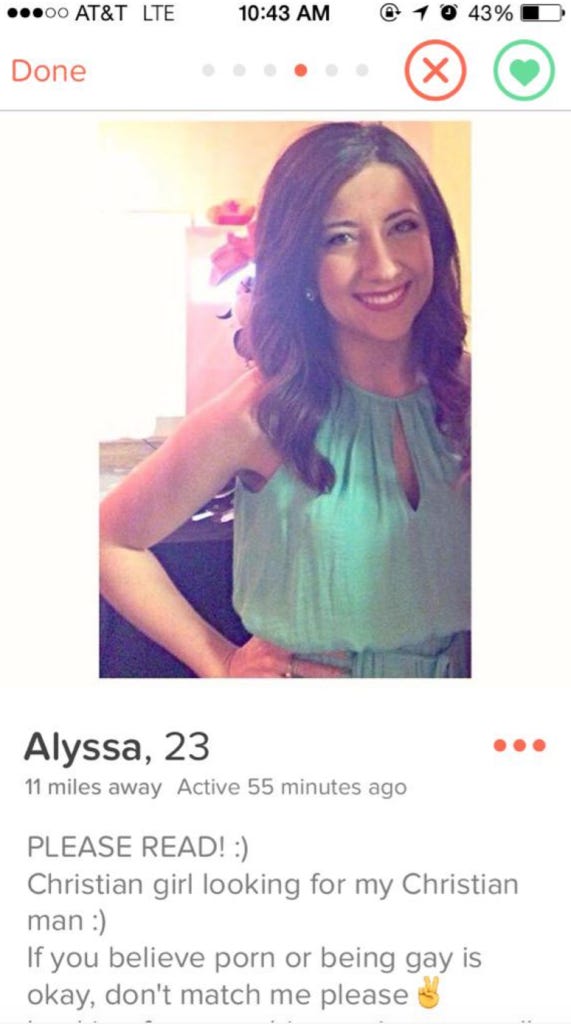 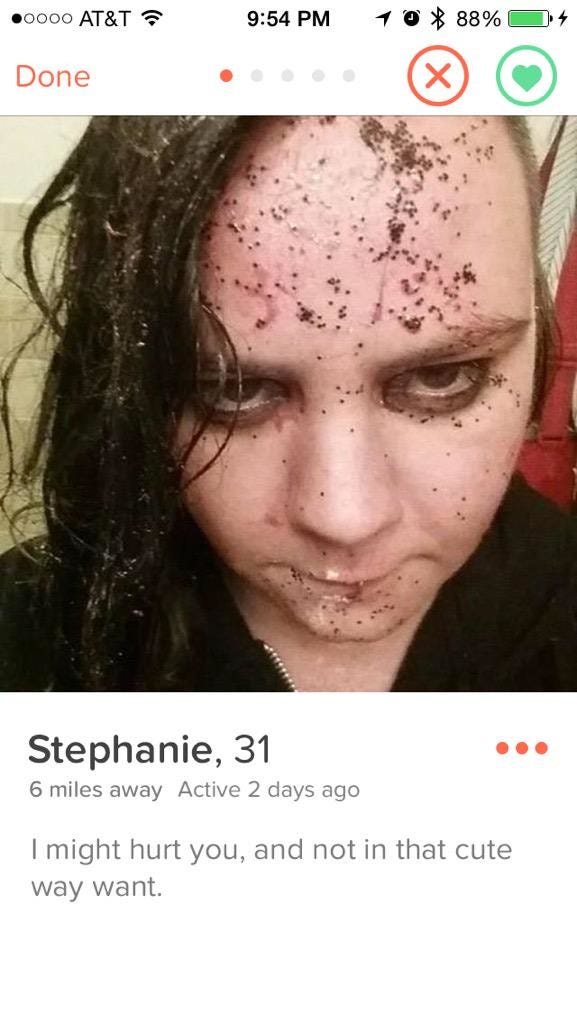 I believe her (via JK) 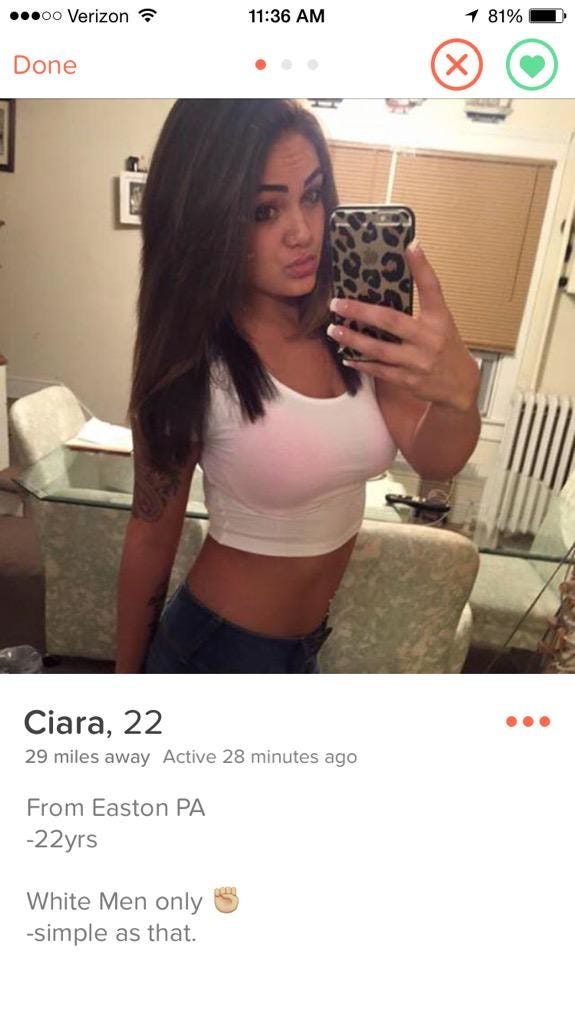 The white power fist is a nice touch (via AB) 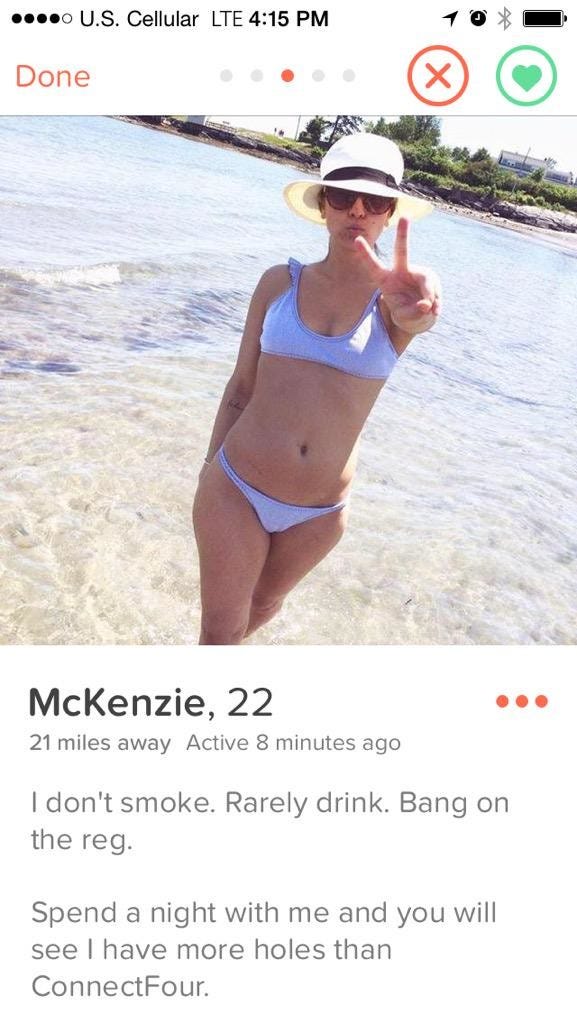 Her Connect Four analogy sounds more like she’s got multiple vaginas than it does her being interested in unconventional banging but, still, would (via GB) 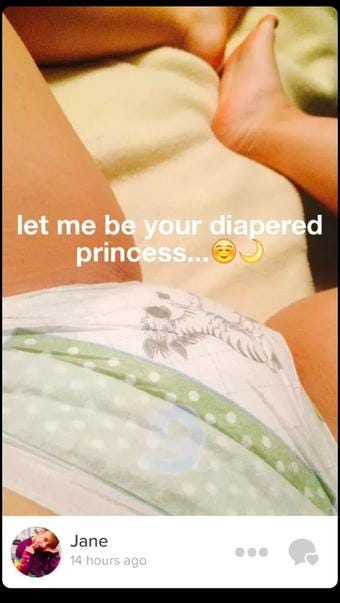 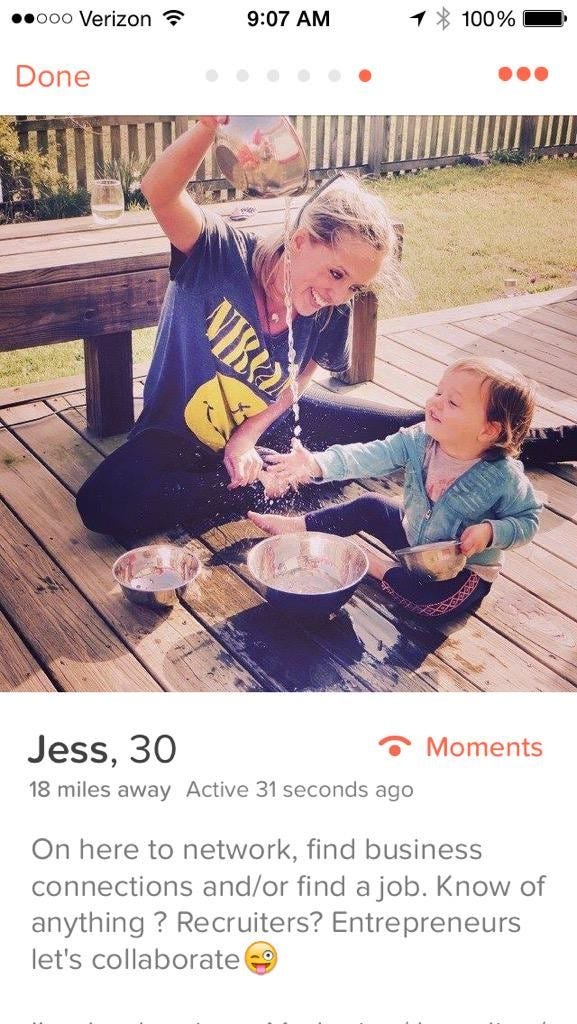 I am only in on this if the implication is that we’re bartering sex for labor here. Lord knows trying the migrant workers at Home Depot hasn’t been paying off (via JC) 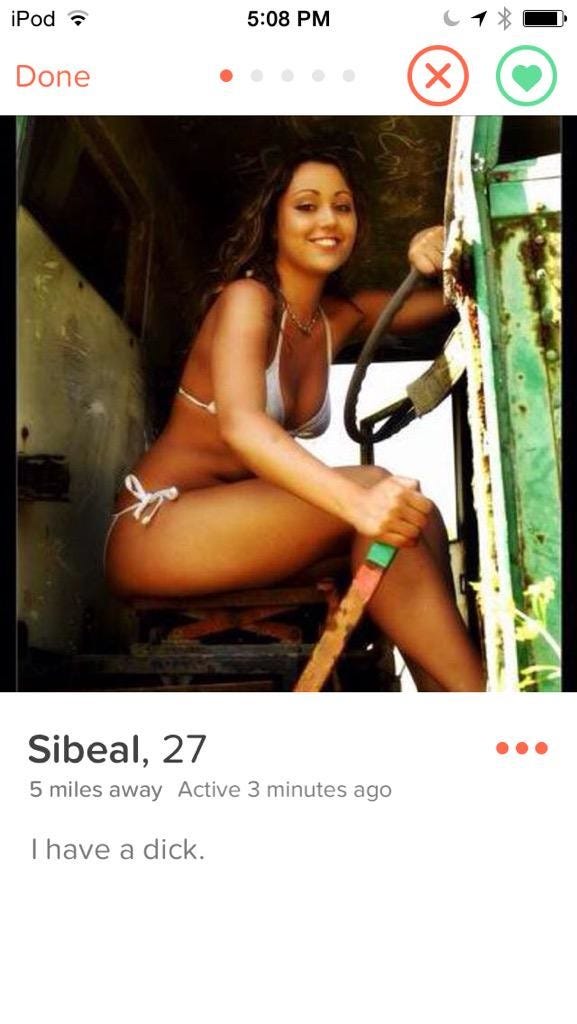 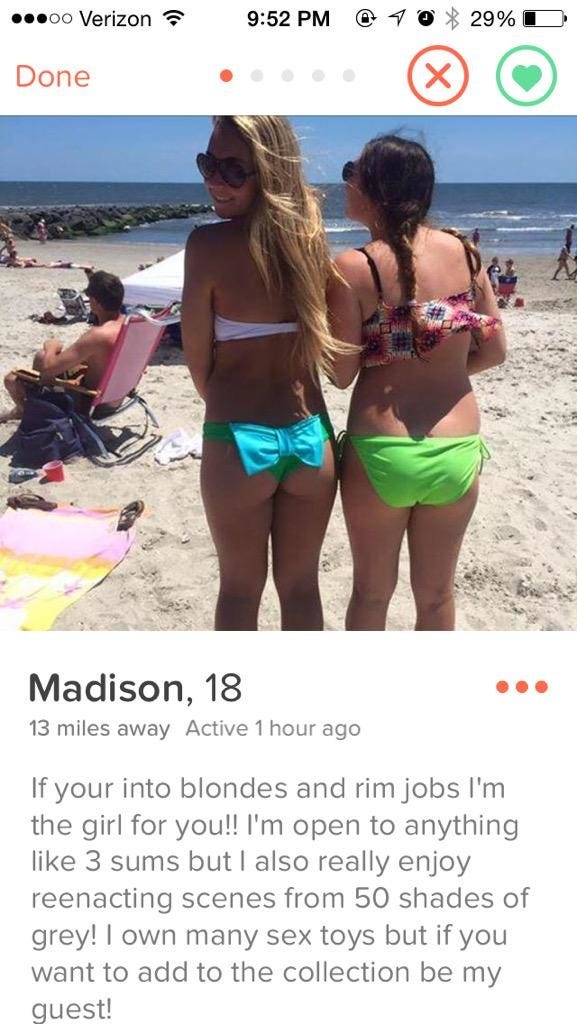 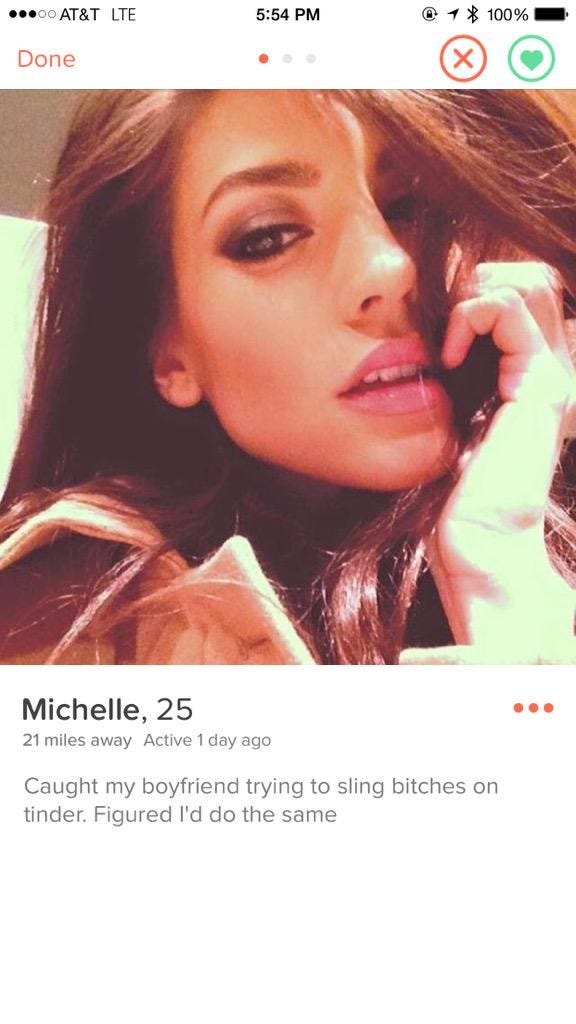 Real hot if it’s me or you seeing this, probably not as hot if you’re the boyfriend (via ME) 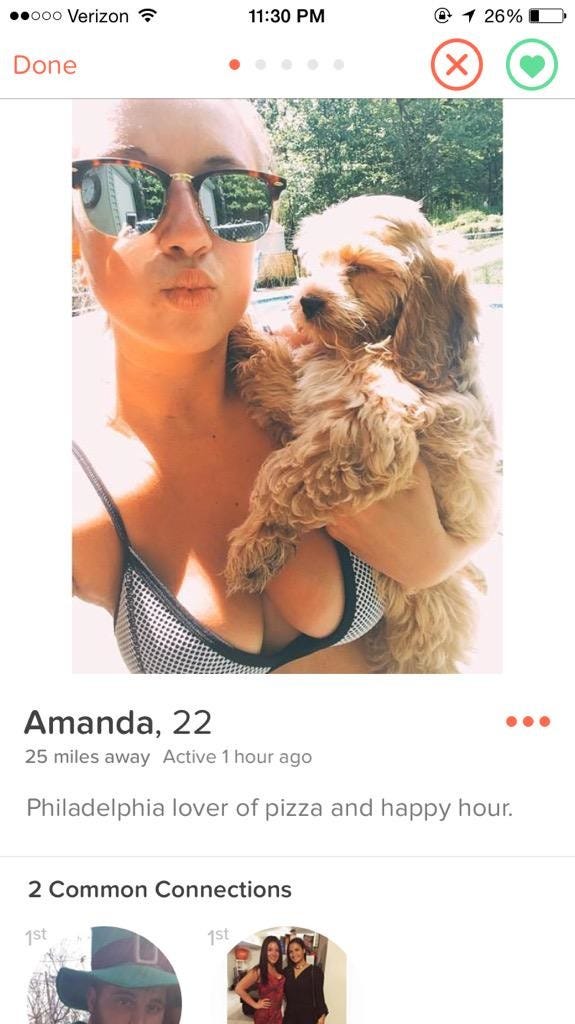 This dog is not nearly excited enough about those tits 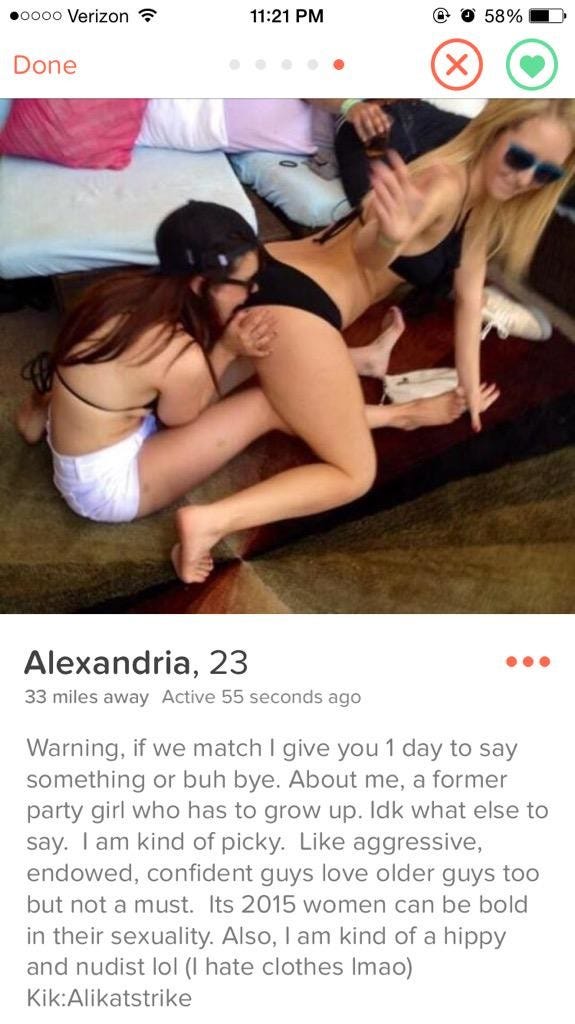 Generous of spirit, that’s what I’d call Alexandria (via LBM) 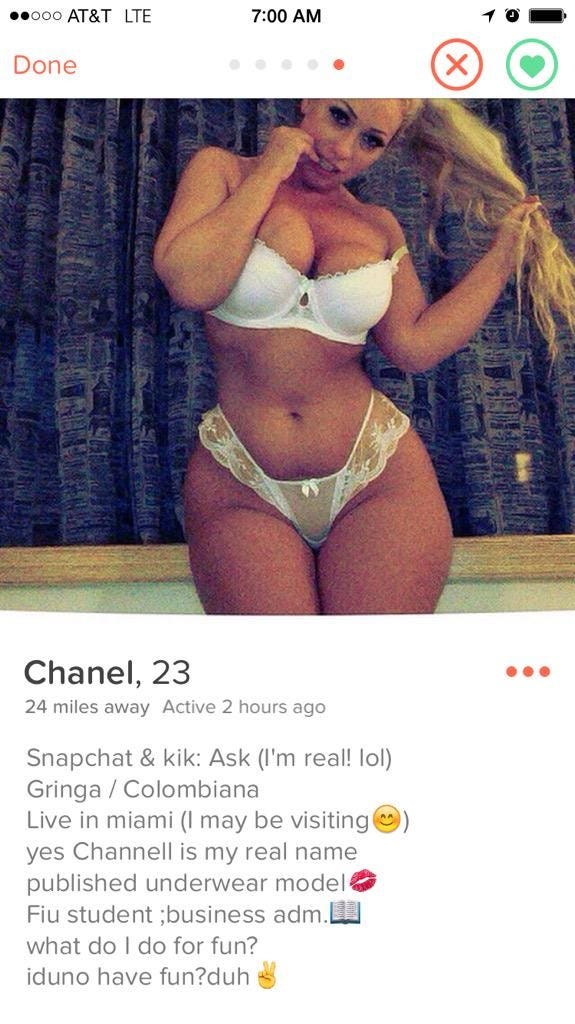 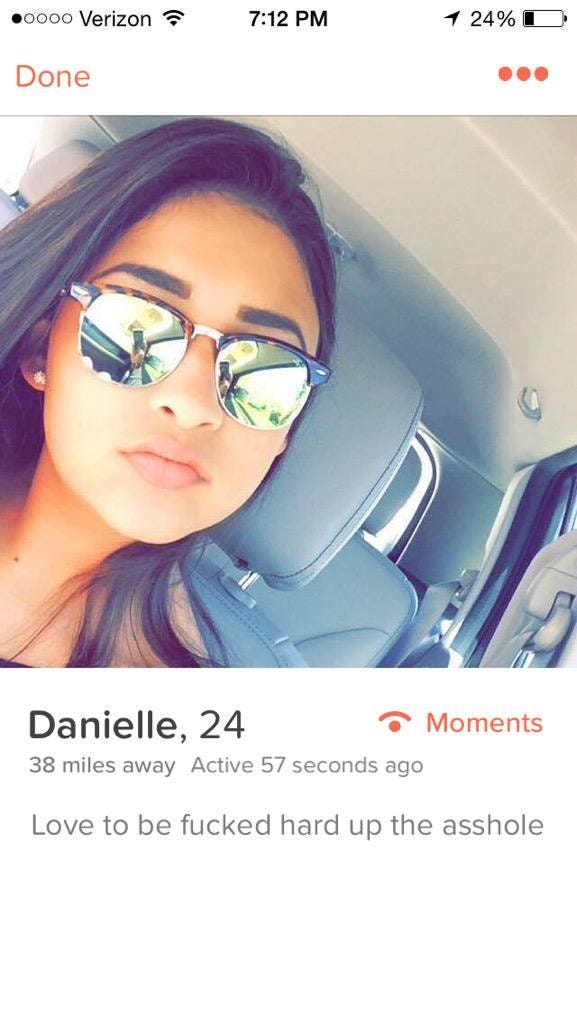 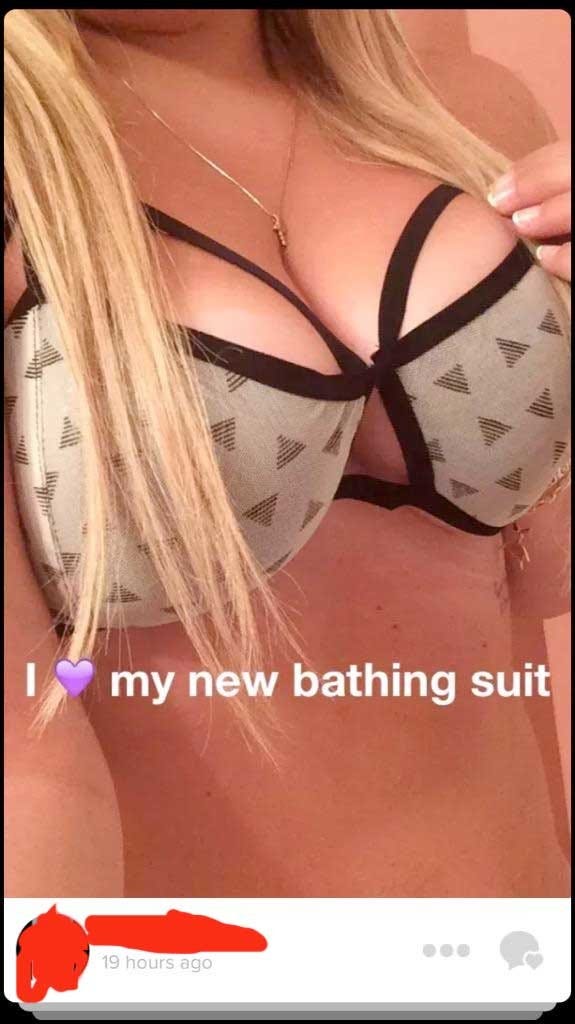 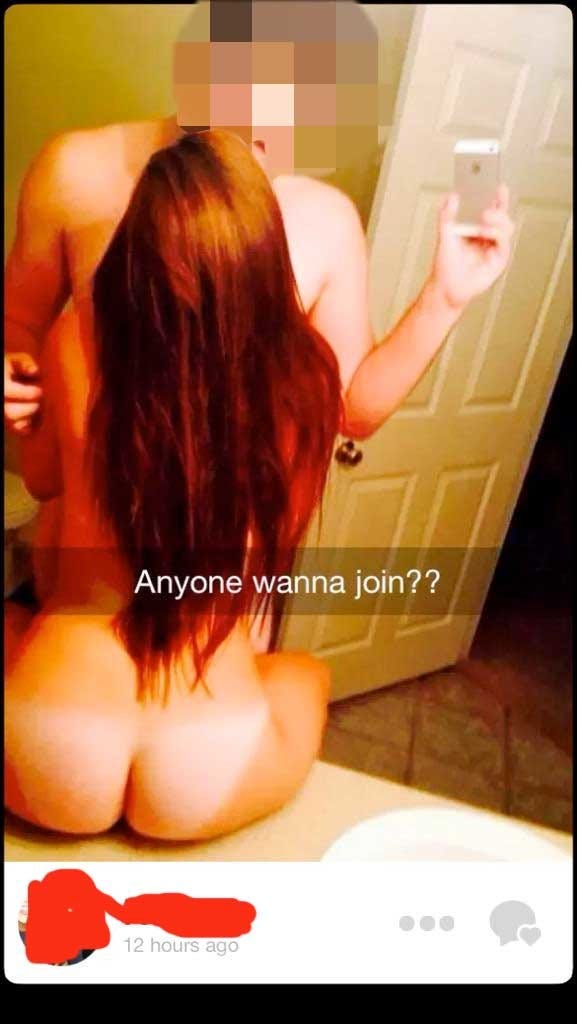 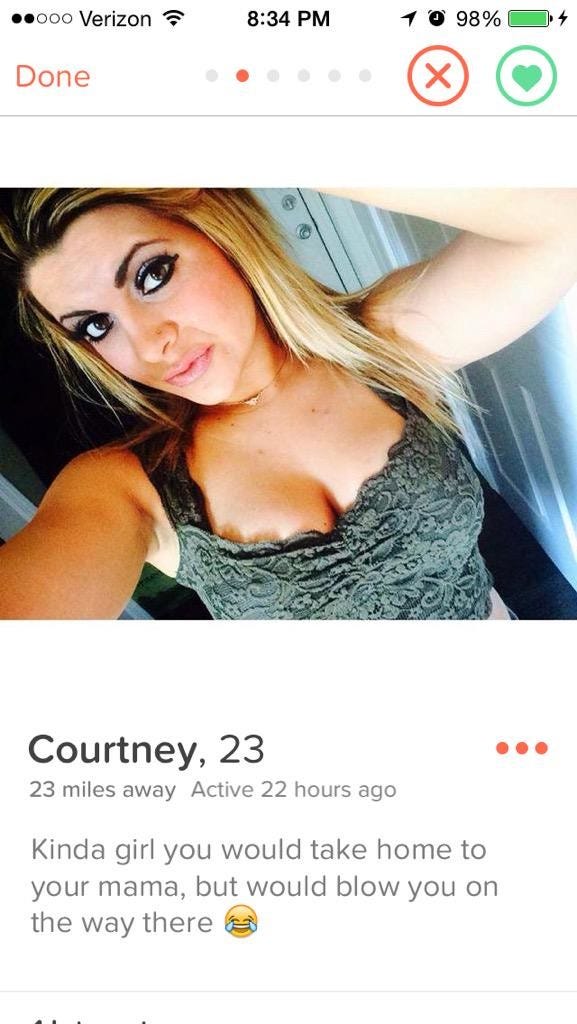 “Honey why does your girlfriend’s breath smell just like your father’s? Strange coincidence” (via AJ)

And this week’s NSFW cherry on top (via DM) is a sweet girl with nothing to hide who must be doing her squats. Have a great 4th of July, send me your screenshots on Twitter, and happy swiping!