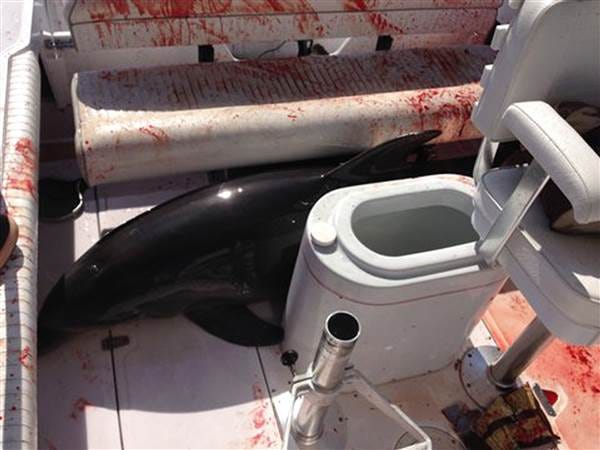 NBC – One California family’s Father’s Day outing at sea turned into pure chaos when a dolphin swimming next to their boat leaped inside — and broke mom’s ankles.

Dirk and Chrissie Frickman and their two daughters were celebrating the holiday — the first day of summer and the couples 18th wedding anniversary — when a pod of dolphins began swimming by their boat as they were heading back to the Dana Point Harbor in Orange County. That’s when one of the dolphins suddenly leaped into the boat, knocking Chrissie over and hitting one of the Frickman’s daughters.

Great. Just fucking great. As if it weren’t bad enough that we had to worry about all the damn sharks this summer. As if we didn’t have to worry about all the Portuguese Man O’ Wars this summer. As if we didn’t have to worry about all the creatures in Jersey Shore waters that can be considered “human” yet we all know how far from the truth that really is. Now we have to worry about dolphins going rogue and coming to break all of our moms’ ankles. It’s no coincidence anymore. Nature has decided to take the shore back from the humans and claim it as their own once again. They’re sick and tired of us thinking that we can just swim right into their kitchen and not expect to become the dinner special for the night.  And when we even start to lose the dolphins, some of the most beautiful and friendly and majestic creatures in the world, well that’s when we know that we’re screwed. But you know what? I’m not ready to go down without a fight. This nation was founded on brave men who dared to be great. Not a bunch of pussies who just stay on the land building sand castles. So if the fishies want a war, well then it’s a war they will receive. Sucks to suck, dolphins. You just got put on the shit list and we’re comin’ for dat ass.

*Disclaimer: I’m still pretty terrified of the jellyfish. Got stung once when I was like 5 and it may have been the most traumatizing experience of my life. But I’m down to fight sharks and dolphins.