This song somehow came out in 1995, that's 25 years ago for you math wizards. It doesn't feel a day old as it still gets regular airplay due to a sound that is timeless and the amazing duo of Method Man and Mary J Blige who perfectly compliment one another.

There were actually 3 versions of this song. The one featured here is the remix by Sean "Puffy" Combs aptly titled "The Puff Daddy Remix".

The original version was featured on Method Man's debut solo album, Tical which was released in 1994.

The other remix, called "The Razor Sharp Remix" was done by RZA and included a full-length music video.

As for the popular version we all know from the radio, commercials, tv shows and movies, that's the one Puff Daddy remixed.

The basis for the remix is a sample of the great Marvin Gaye and Tammi Terrell’s 1968 hit, “You’re All I Need to Get By”, with Mary J. Blige singing the choruses, and backing vocals.

The song also contains a repeated sample (“Lie together, cry together/I swear to God I hope we fuckin' die together”) from The Notorious B.I.G.’s “Me & My Bitch”.

Puff Daddy also lifted and sampled the drums from one of his favorite legends, Slick Rick's "Mona Lisa"

Method Man has stated that if it weren't for Mary J Blige agreeing to do the hook and feature on the song, it wouldn't have been as successful nor would his solo career-

“I owe Mary my solo career and she can have it,” he told HipHopDX. “I owe her, because that’s what really put me over the top and set me apart from everybody that year when that was out, you know? I think there was a lot of copy cats that came behind that but that solidified my career right there, so hats off to Mary. I love her for that.”

Meth and Mary were rewarded for their chemistry in ’96, as they went on to win a Grammy Award for “You’re All I Need/I’ll Be There For You” in the Best Rap Performance by a Duo or Group category.

The single, which was pressed featuring all three versions of the song sold 800,000 copies and was certified platinum by the RIAA. 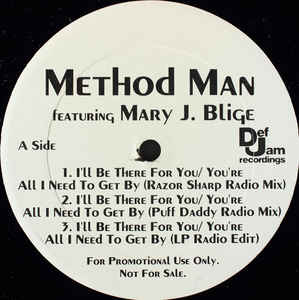 An absolute banger of a song that launched the "thug love" genre.