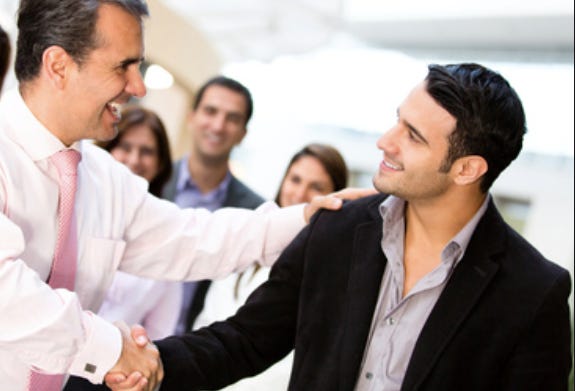 So Linkedin posted these 9 things you need to do to be promoted and I’m already doing all these things without knowing it. I guess I was just born for the real world, no big deal. But for everyone else who wasn’t born with these qualities already in your brain here they are. Full article here LinkedIn

Well, duh. Everyone knows the more time you spend with people the more you become like them. Why do you think I moved all my stuff to the back of the office near Pres’ office? Yeah, it was mostly because the wifi sucks up front where the interns sit and I had to walk back there anyways if I wanted to send a tweet. But as everyone in the office says (Dave says) every great idea comes from his brain so if I sit closer some info has to spill over to me, logic 101.

Once again, gotta ditch the whiney interns and sit in the back of the class with the cool kids. What am I gonna learn from the other interns, I already know how sit there and look busy.

3. Attitude is everything. You may be the most brilliant programmer, designer (fill in your job here) in the company, but if you are prickly and difficult to work with, then you are certainly adding to the complexity of getting promoted. Central to getting a promotion is the endorsement of others. If you are arrogant, self-aggrandizing, grumpy, or generally unpleasant, chances are your endorsements will be slow in coming.

I’m SO good at attitude. I’m smiling and giggling 150% of the time, so far my giggling has only been seen as a problem but I’m sure that’ll change and when it does i’ll be looking for my promotion. Just a big ball of happiness.

4. Communicate. No one knows better than you all that you are doing. It’s important that you create an appropriate and effective method of communicating your accomplishments to your manager in a manner that suits their style, not yours. It should be written, brief, and consistent. A few bullet points at the end of each week will go a long way in keeping your boss informed.

Being the only intern that’s allowed to go into Dave’s office and talk to him I think it’s safe to say I have this one on lock. (I’m going to start sending Dave bullet points of my weekly accomplishments, I think he’ll really enjoy that.)

5. After you communicate, communicate some more. Many people take the stance, “My work will speak for itself.” Understand that “your work” has a limited vocabulary.

See number 4 because its the same.

6. Participation is highly recommended (read: required). Just like Spanish class in high school, participation is essential if you want to do well. You’ve got to speak up, participate in meetings, interact effectively and regularly with your team. If you don’t participate, people will assume you have nothing to contribute. Those who are perceived as having nothing to contribute generally do not get promoted. It would be better for you to not attend a meeting than to attend and never say a word.

This kinda goes back to sitting with the important people. If Dave has a question and yells down, i’ll answer it. That’s about the closest thing we have to meetings because we work at Barstool so i’d give this a check.

7. Invisibility is great if you are Harry Potter, but it won’t help you get promoted. The promotion process inevitably includes discussions between managers and a comparison of employees to determine who is and isn’t ready for a promotion. If your manager recommends you for a promotion and the other managers do not know who you are, it’s going to be difficult to get the necessary endorsement.

I’m not really sure who we would consider other managers in this situation, I guess the other cities. If so I am anything but invisible. Been on the rundown with KFC and Big cat, Smitty yelled at me once on the rundown for being late, and they’ve all tweeted at me at least once. Everyone who’s anyone knows who I am. Promotion city here I come.

8. Don’t fixate, obsess, myopically focus on getting promoted. Sometimes employees get stuck in a rut and spend way too much time and energy thinking about when he/she will get promoted. A conversation about promotion should take place once or twice a year (maybe 3 times?), but not every month. An employee who is constantly bringing up promotion risks having their manager shut down and tune out.

Didn’t even consider it an option until I read this article.

9. Go with the current not against it. Companies usually have a regular cadence of when promotions are considered, often in conjunction with the annual performance review, or every six months. If you are going to make the case to your manager that you should be promoted, do it ahead of these regular promotion cycles.

Duly noted, I’ll get all my shit together before my annual performance review. Gotta be ahead of the game.

Well, looks like I should have been promoted yesterday but my boss is on Nantucket for the next month (if you haven’t already heard 1,000 times on Twitter). Might just be running the company by the time he comes back with these inborn skills.

P.S quote from the end of the article “Too many people cross their fingers and hope it will all work out.” This is literally what I do with every single thing in my life and probably what I will continue to do. It’s worked out for me so far.