After 13 hours and 45 minutes worth of attempts the golf ball finally went in the goddamn hole. What a nightmare last night was.

and about 6 or 7 hours into the stream….just as we were about to finish up, I fired off this tweet that may or may not have been 100% truthful

(He said 3k, whoops) Well after guys like Mush, Big Cat and the Barstool Main account jumped in on it the stream blew up and we were locked in. Trent was distraught but hung in there like the good man he is. We said we would play for 24 hours or until we made an ace in a match, whichever comes first. We’ve played a shit ton of 2k recently and have never even come close to a hole in one.

Throughout our many hours of attempts we certainly had some close encounters. Boy does shit get dark when you've been streaming for 12+ hours already.

I honestly thought we were going to be there forever. I was going to die in that uncomfortable fucking computer chair I have because of this dumb fucking tweet I sent out to get more viewers on our video. But at 5:12am we finally got the ball to go in the hole. Praise the lord.

With everything considered and another possible 11 hours of streaming ahead of us, I can confidently say that was the best, most important golf shot of my entire life. Hats off to the professional streamers out there because that is an absolute fucking grind sitting on camera for 10+ hours playing the same game over and over. And they do it every single day? Nuts.

Now we get to sit back and watch the final round of the Mayakoba in Mexico. As I write this the leader Emillano Grillo is on the 5th with Viktor Hovland, Tony Finau, Max Homa and JT all behind him but within striking distance 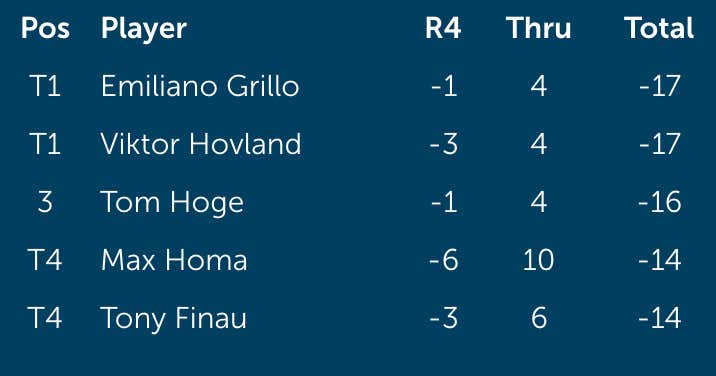