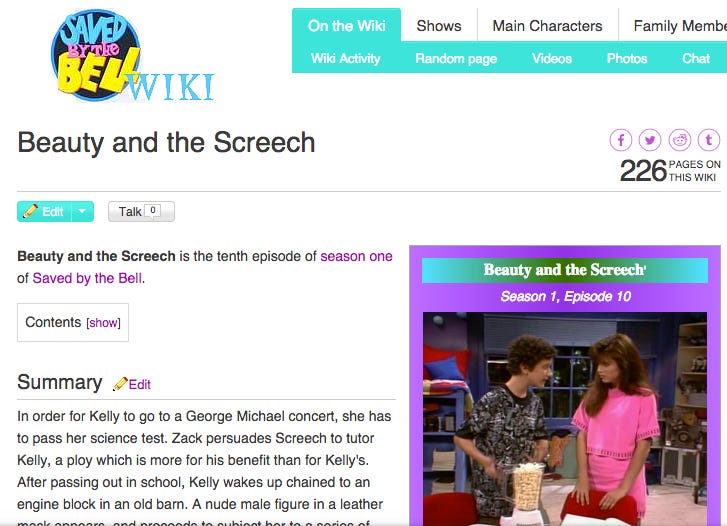 Saved By The Bell Wiki – In order for Kelly to go to a George Michael concert, she has to pass her science test. Zack persuades Screech to tutor Kelly, a ploy which is more for his benefit than for Kelly’s. After passing out in school, Kelly wakes up chained to an engine block in an old barn. A nude male figure in a leather mask appears, and proceeds to subject her to a series of sexual trials which tax her body, mind, and flexibility. When Zack learns of what Screech has been doing to Kelly during their “tutoring sessions” he gets jealous and regrets his set-up. Vowing that no one gets to sleep with her but him, Zack rushes to her rescue. However, outside the barn he stumbles over the mutilated body of Screech. Confronting the masked figure while they are trying to force Kelly to fellate a horse, he rips off the mask to reveal it was a hermaphroditic Jessie who was assaulting Kelly all along. Deciding he doesn’t want to “rock the boat” Zack leaves things the way they are, and goes to the movies with Slater, where they proceed to talk about what he just witnessed. Zack and Slater both think Kelly had the right idea, leading to an unwanted chain of events causing the whole cast to suddenly disappear. Years later they were.,. saved by the bell.

Ah the internet. Its a wondrous place. Pretty much anything your brain can think of, it has. You wanna watch a girl put penises in every single one of her orifices? Internet has it. You want to see someone get their head chopped off or get hit by a train? Got that too. You close your eyes and envision the single most fucked up episode of Saved By The Bell that the human mind can conjure, and would you look at that, the Internet has that too. Saved By The Bell – The Hermaphrodite Torture Years.

If we’re being honest, a lot of this plot are thoughts I’ve had before. Jess a Hermaphrodite? Yup. Up until Showgirls I thought that was entirely possible. Kelly Kapowski getting tortured sexually like shes filming for kink.com? I’ve ABSOLUTELY thought about that. Screech being dismembered? Well I havent really thought about that before but thats not that far fetched. At the end of the day I feel like I could have written this script.

PS – So I wrote this blog earlier in the day and since its not exactly the most important of topics I slated it for the last spot of the day. If you click the link, obviously since that time, someone has fixed the wikipedia page back to normal. So I ask the question, who’s worse – the person who spends their days making up FUCKED up scenarios for Saved by The Bell episodes and hijacking the Wiki Page, or the person who’s in charge of fixing the page and putting it back to normal? Like some sort of fucking Saved By The Bell Wiki Curator. Toss up.