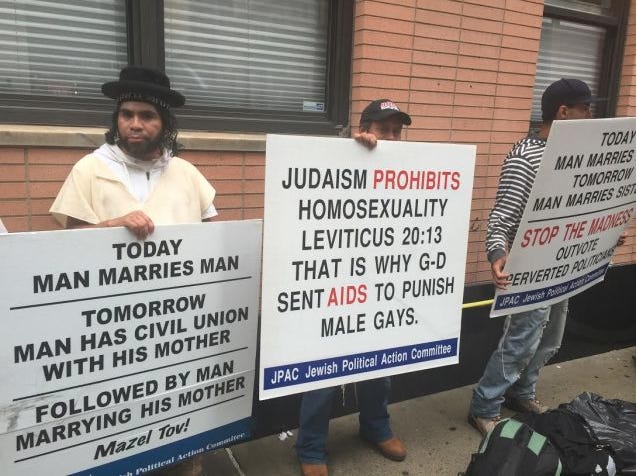 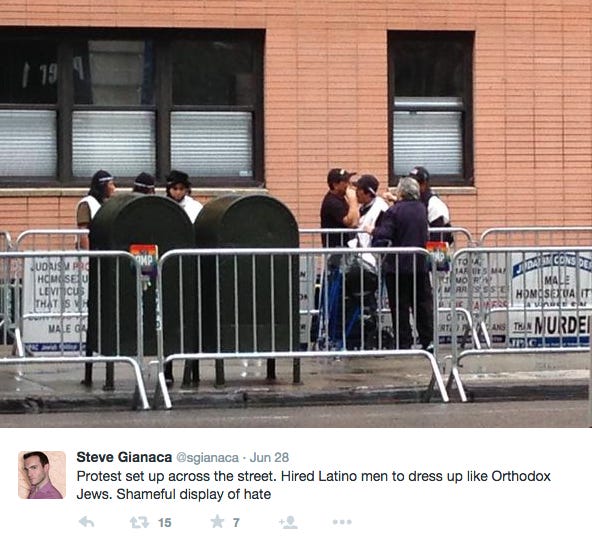 Gawker – This weekend, as the elated masses took to the streets to celebrate Friday’s historical win for inclusiveness and equality, the hate groups of the world took it upon themselves to balance out all that joy. Or, in the case of the Jewish Political Action Committee, they took it upon the Mexican laborers they hired to dress up as Jews and do the protesting for them. The New York Times ran across this ragtag group of supposedly Semitic protestors bearing signs that read things like “Judaism prohibits homosexuality” and “G-d Created Adam and Eve NOT Adam and Steve.” But upon being questioned, one of the men revealed that they were actually Mexican workers who’d been paid to show up and protest. From The New York Times: Heshie Freed, a member of the political action committee, an Orthodox Jewish group based in Brooklyn, said that the men were supplementary troops, filling in for the Jewish students who would normally be called upon to demonstrate. “The rabbis said that the yeshiva boys shouldn’t come out for this because of what they would see at the parade,” Mr. Freed said. And the story gets weirder still. According to tipster Ari Mandel, the “Jewish Political Action Committee” may actually consist of just one man. What’s more, this isn’t his first hate-filled rodeo, as evidenced by these photos from last year’s Israel Day Parade.

I’m not even gonna focus on the Jewish Political Action Committee, whose entire enterprise is nothing more than a solitary man with a messy apartment that may or may not contain a chicken. But rather, I’d like to focus on the Mexicans. Who are just the greatest people on this earth.They’re just the hardest working, nicest group of people out there. Is there anything the Mexicans wont do? Whether you’re asking them to hang drywall or dress up like a Jew and protest gay rights in Manhattan, they wont say a word. They’ll do the work at an exceptional level for very, very little money, and everyone goes home happy. You can find them sitting on the corner of Hempstead Turnpike just waiting for work. Scoop em up in your truck and put em to work.

I’m sure these guys were fucking THRILLED when they found out their work for the day. They were probably like “Hang on. So all I gotta do is wear this curly hair and hat and hold this sign?” No manual labor. No dangerous construction. Just stand here. Probably had zero clue what the sign said, nor did they care. Just a bunch of Mexicans dressed as Jews, hired by Jews. A crew of hired guns. Mercenaries. The Darrelle Revises of the employment world. They will go anywhere and do anything for that cash money.

PS – That picture of the guy with the Mazel Tov sign is an all timer. Laugh out loud funny.