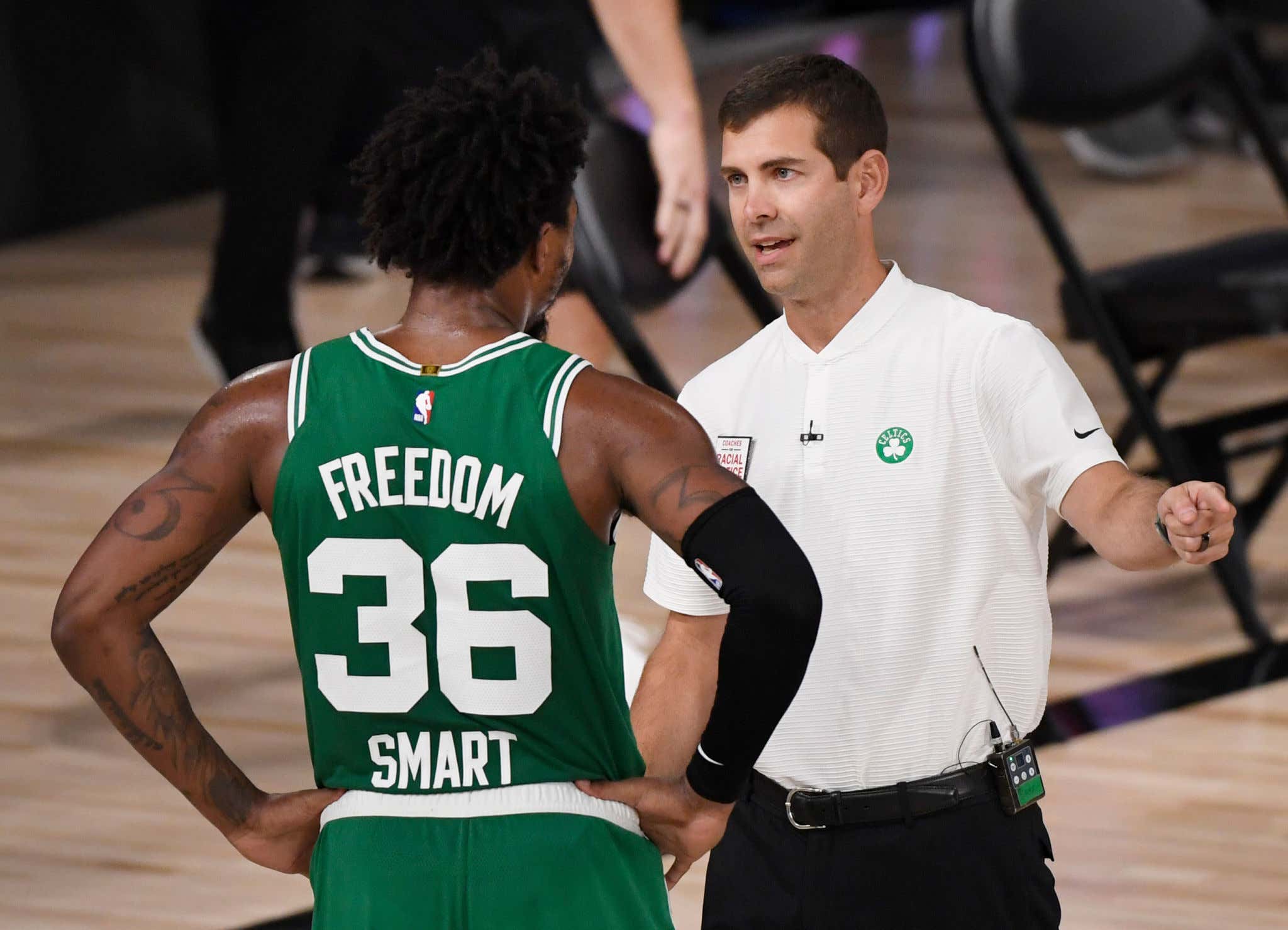 Since the news broke yesterday about Kemba's fucked up knee, Romeo's recovery timeline, and Tristan Thompson's tweaked hammy, I've been spending a good amount of time yesterday trying to figure out what Brad is going to do. Once Ainge came out and said in his press conference that he's not going to be making any additional roster adjustments, we can assume the guys they have on the roster now are what we can bank on them moving forward with when the season starts in three weeks.

So, what will the rotations look like? How do we think Brad staggers things in order to maximize what he has available? With a potentially improved East and a shorter season, it feels like getting off to a good start will be important. Now that we've had a pretty big sample size of how Brad thinks, below is what I think he might do based on his history

Ok, don't freak out. Remember, this is going to be a shortened camp, shortened preseason, new guys, all of that. For that reason, I think we see Brad put an emphasis on continuity to start the season. I think the center position is going to be fluid all season based on the opponent. There will be some games we see Thompson start, and then if they play a smaller more athletic frontcourt, that'll be Theis. To start the season though, if Thompson doesn't play a whole lot in the preseason games, this is the group that makes the most sense to me.

When a starter has been out, we've almost always seen Marcus Smart slide into the starting role. Doesn't matter if it was Jaylen, or Kemba, or Hayward. Smart was always inserted into the starting lineup for Brad. Now, there are two ways he could do that. He could have Smart at the two and then bump everyone up a slot. Or, he could have Marcus run the point where he is at his best as a facilitator and not a shot taker. Where I may differ from most is that I have Grant in at the four. My reasoning is simple. They will need someone who can defend (check), knows his role (check), won't take shots from the Jays (check), and can hit the occasional open corner three (check). It's an extremely, and I mean extremely small sample, but as a starter last year (5 games) Grant shot 58%.

Grant was also part of Brad's second most used playoff lineup of Kemba/Smart/Jaylen/Tatum/Grant. All signs point to Brad trusting Grant to play within his role and earn minutes. That's why I think he gets the nod to start early. It may not work and Brad will adjust, but that group in my opinion gives you the best chance at a good start. There's a familiarity there, it's a group that can defend at a high level which will be very important.

Now when it comes to the second unit, I think it'll be very unlikely that we see lineups that have none of the starters mixed in. So it's more about which guys do we think will be in that top 9ish-11ish rotation to be in the mix. We can lock Jeff Teague/Robert Williams/Thompson in as rotation guys. To me, at the start of the year the debate really comes down to two players

I think we all want to see Nesmith play right away. A team that desperately needs shooting could use a guy that many say is the best shooter in the draft. The one thing that he needs to show during preseason and in camp is that he can defend at an acceptable level. Remember, for a rookie to see the floor that's really all that matters. Their offensive game is irrelevant. Well, now they have an offensive rookie that might have questions on defense. I think now that Romeo is out that helps Nesmith's odds of cracking the rotation from the jump.

to start the season. Then, once Romeo is back and hopefully Nesmith shows he can play, you see them adjust to

With Timelord sprinkled in. I'm not ready to say Payton Pritchard is going to earn minutes right away, he certainly could, but he has more players to beat out for minutes. He does fit the mold of a guy that earns minutes under Brad, but he's kind of stingy when it comes to playing his reserve rookie point guards not named Smart. This is an undersized second unit no doubt, but if Romeo's defense is legit and they are going up against a small lineup, I don't hate that move.

As I said, things are going to be fluid while guys are banged up. So what other type of lineups are at Brad's disposal that could be effective? If we base it of what we saw last year, these intrigue me

For this one I had to substitute Teague for Wanamaker, but let's just consider that a wash. The other four shared a lineup with the backup PG in 8 games last year and threw up 115 Ortg / 80 Drtg in limited minutes. I would bet we get a lot of this lineup to start the season.

Maybe some of you think the play is to just slide Teague in with that group of four instead of starting Grant. Well, last season the backup pointguard played with those four in 10 games. They put up 119/113 splits. My only concern here is if you have both Teague/Smart in the starting group, that really puts a strain on them when it comes to the bench, and the last thing this team needs right now is overextending guys to start the season. That's why I think Teague/Smart are split up.

If I'm playing Timelord, I want to make sure he has some frontcourt defensive rotation help from Grant. Grant seems to get how things work. Sometimes Timelord has mental lapses. I'm also making sure he shares the floor with the best player on the roster at throwing lobs and running P&R, and right now that's Smart.

If there's one thing this team has shown under Brad is that being undermanned or having to deal with injuries is mostly a non factor when it comes to regular season wins. The Hospital Celtics are a real thing. When they are able to take on the underdog role, all the things that help steal you games in the regular season like defense, effort, winning plays, etc tend to happen. Obviously, it's a problem once you get into a playoff series and things sort of even out, but the regular season is primed for overachievement and nobody overachieves more than the Hospital Celtics.