From The Sun UK:

This is the moment a woman smashed hundreds of bottles of booze and lobbed gin at customers in a rampage at Aldi.

She remained silent as she dragged thousands of pounds worth of wine, beer and spirits from the budget supermarket’s shelves in Hertfordshire on Wednesday afternoon.

Video of the shocking five-minute riot shows the woman, wearing a hoodie, backpack and mustard tracksuit bottoms, slip on bottles and slash her right hand.

She then raised it in the air and carried on tearing the bottles down with her left hand.

One shopper queuing to pay for his goods told her to “calm down” – prompting her to launch a bottle of gin at his leg.

A security guard from a nearby store detained her by “bear-hugging” her before she was arrested by cops around 2.30pm.

Local reports estimated around $130K in damages for the nearly 500 bottles that were destroyed. 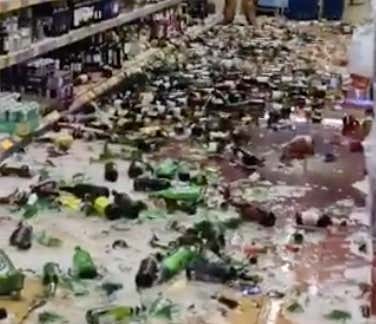 Looking at the date, this occurred on Thanksgiving Eve AKA supermarket amateur hour. Tensions are high, carts are bumping into each other & there's a mad rush for the last boxes of the good stuffing brand. Throw in some COVID & extra tense political climates around the globe & you've got the perfect recipe for a gal to slowly & methodically smash 500 bottles of booze while fellow shoppers watch it happen. Very therapeutic.

Perhaps she knew her uncle would have too many sips of brandy at Thanksgiving Dinner & go off on a Brexit rant that she's just not in a space to handle right now, so to nip things in the bud the brandy had to go before he could get his hands on it. Whatever the case I hope she's getting the help she needs (& I hope the Aldi workers get some overtime for this monumental cleanup job).