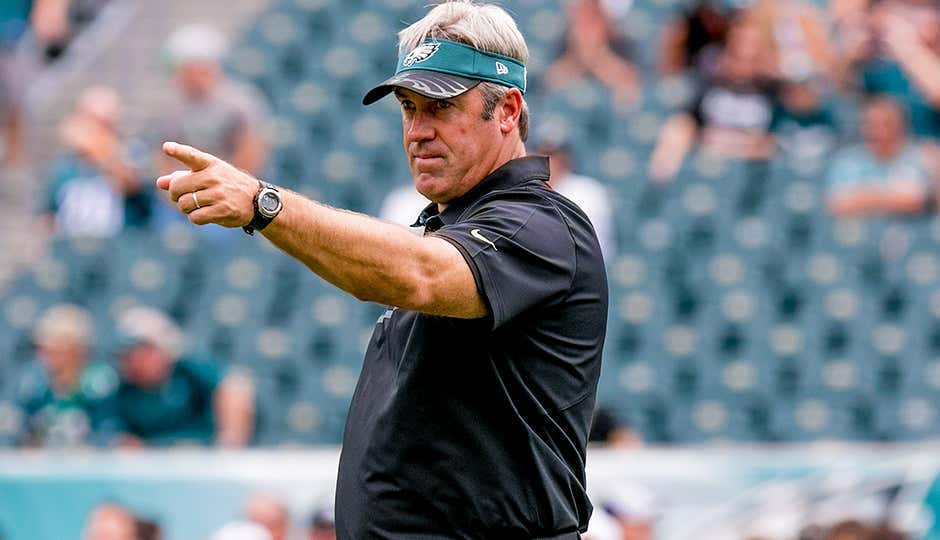 Jason McIntyre had a scoop, though completely inaccurate, that Joe Judge and Giants' OL coach Marc Colombo got into a little tilly this morning which resulted in the firing of Colombo. Unfortunately that story was immediately refuted and deemed as "absolutely false in every way". But you could imagine what it would be like if it actually happened, right?

Now it's not completely out of the realm of reality that we'd see some fisticuffs breakout amongst those in the Giants organization. Much like the rest of the NFC East, they're a total disaster right now. And Joe Judge is a Philly guy so he's always down to throw some hands. Chances are everybody in the NFC East wants to fight themselves right now with how horrific this season has been for all 4 teams. So if push came to shove and a fight broke out at the NovaCare Complex, which members of the coaching staff would Doug Pederson be able to beat the brakes off of, and which coaches would have Doug eating through a straw for the next several weeks?

Duce Staley: L. Barely even has a chance to realize they're fighting before Duce puts Doug to sleep.

Jim Schwartz: W. Jim would just keep backing away trying to play a bend-don't-break type of defense. Eventually he'd run out of room and Doug would pummel the shit out of that little weasel.

Dave Fipp: L. You see that man's eyes? Those are crazy eyes. Even if Doug Pederson were to win the initial fight at practice, Dave Fipp would make it his goal to ruin Doug's life and win the war.

Rich Scangarello: W. Looks like a guy who likes to end his day with a nice glass of warm milk. No chance against Crusher Doug.

Jeff Stoutland: W. Spent some time under Nick Saban so I have a feeling he'd put up a good fight here. But unless he gets a knockout shot in within the first 15 seconds, I don't think Jeff Stoutland has the stamina to stay in the fight.

Press Taylor: W. Obviously Press has the advantage here as the young fella. But you just can't lose a fight to a guy named Press Taylor. You can't. At least not as a head coach in the NFL.

Matt Burke: W. Matt Burke went to Dartmouth. That immediately makes him a nerd. I know that Doug gets bullied by the analytics nerds every time he has to make a decision in the middle of a game, but I don't see him losing a fist fight to one.

Ken Flajole: L. Kind of reminds me of Mike Ehrmantraut. You have no idea what this old man is capable of. I think he's probably seen some shit that Doug couldn't even begin to imagine. That gives him the advantage here.

Tim Hauck: L. These guys were teammates in '99. I'll take the guy with the tackling experience here. Let's just hope that Philly fans don't cheer while Doug is on the ground, though.

Justin Peelle: L. Tight ends are meat heads. He's younger. He looks like a maniac. No chance for Doug.

Aaron Moorehead: W. I honestly didn't even know the Eagles had a wide receivers coach. But if he's even half as bad at fighting as he is with working with receivers, he's getting knocked out in under 10 seconds.

Marty Mornhinweg: W. I'd cheer for Marty in this fight, but I don't think he'd have it in him.

Dino Vasso: W. Dino has the youth to his advantage, but Doug has size and old man strength to his.

Andrew Breiner: W. Andrew Breiner looks like a good ol' boy who could surprise you and kick a little ass. But at the end of the day, he respects his elders and is too polite to beat up Doug. So this is more of a W by default.

Mike Bartrum: L. The more I think about it, the more I think Mike Bartrum would come out on top if the entire coaching staff had a royal rumble. So not only would Doug lose here, but I think everyone else would as well.

Matthew Harper: W. Again, I'm not buying the idea that anybody who works with the wide receivers here would be able to put up any sort of a fight.

Roy Istvan: This one might be a toss up. I honestly have no idea how to feel about it. I think they'd each get some good shots in. At the end of the day, Royo Istvan has crazier eyes so I think that gives him the edge for me. But I'm still going to call a draw here.

Ryan Paganetti: L. Okay so I know I said that Doug wouldn't lose a fight to a Dartmouth guy. But after seeing his brother TJ getting the shit kicked out of him by Doug, Ryan Paganetti now has to avenge his family. So he's fighting for something a little more than just himself, which gives him the advantage.

Luke Thompson: W. Not particularly threatening outside of size, but Doug's a big boy himself.

Joe Pannunzio: L. Joey P seems like he has some connections to the Philadelphia Crime Family. It would be in Doug's best interest to take the L here before he has Skinny Joey Merlino knocking at his door.

Josh Hingst: L. I'd be shocked if there were any head coach in the game of football who could out-crazy their strength and conditioning coach.

So there you have it. Depending on how that fight against Roy Istvan would go, Doug is hovering right around that .500 level against his coaching staff. Which is honestly pretty good, I'd say. At the very least, he wouldn't have a losing record. I feel like that's all you can really ask for. After doing all of this, I feel surprisingly better about Doug Pederson moving forward. Maybe a battle royale is just what this team needs.