Welp, I did not see that coming ONE bit. I thought the Giants were going to mosey into their bye week, work on some fundamentals, and get ready to bring pain on the Bengals the Sunday after Thanksgiving. Instead our stud kicker got covid, our training facility has been shut down, and our offensive line coach gets canned just as the O-Line started to look competent for the first time in roughly a decade. When Barstool social media guru and all around motherfucker Joey Langone asked if I had seen the news about Colombo, him being fired was the furthest thing from my mind. 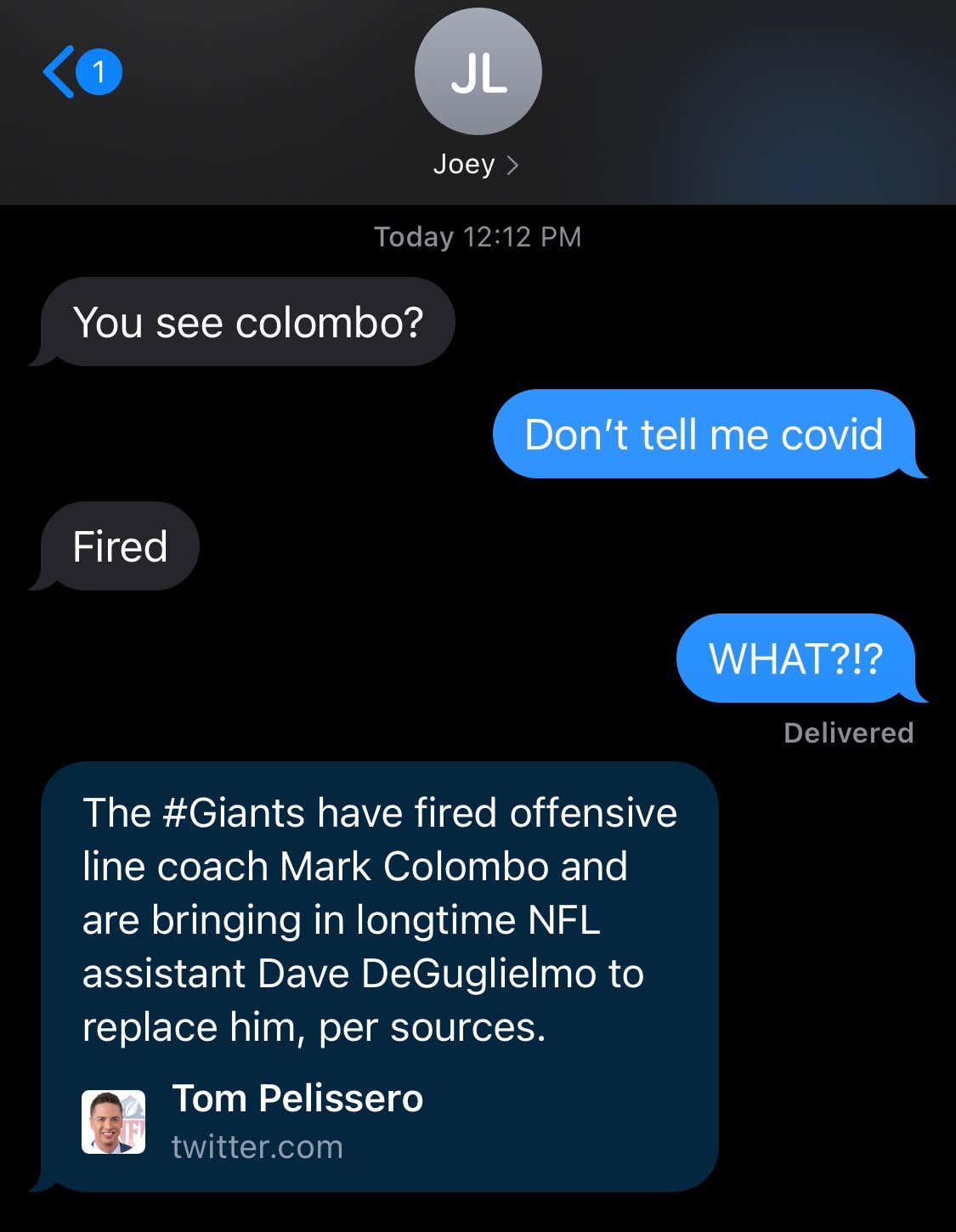 HOWEVAH, do not take my surprise as any kind of outrage. My official statement on this matter and every other Giants matter for the foreseeable future is I trust whatever Coach Judge rules with every fiber of my being. If Marc Colombo did or didn't do something that could be fixed by running laps until he passed out, he had to go. That simple. Big Blue is the Fighting Joe Judges and what he says is the law, gospel, and the only thing that matters.

The craziest thing is that improvement we all saw the last few weeks may not have been from Colombo but instead Coach Judge deciding it to get his hands dirty by coaching up the Hog Mollies.

Is the improvement in the line the Jimmys and the Joes, the X's and the O's, or just Big Joe being fucking great at his job? We'll see. It would've been nice if the Giants could have locked up Bill Callahan as O-Line coach, even if the reports that he didn't want to work with Jason Garrett were true.

I don't know much about Dave DeGuglielmo. But anybody that played a role in the 2007 and 2008 Giants offensive lines that beat the everliving shit out of their opponents on their way to a Super Bowl and the most fun regular season I've ever had as a fan before Plax Cheddar Bob'd himself is A-OK in my book.

So this report is going around right now but I am calling bullshit on it simply because I refuse to believe this man would lose a fist fight to anybody, even a former NFL offensive lineman.

Of course Coach Judge is from a family of boxers. #FootballGuy #BoxingGuy #MansMan

In addition to all this, about a zillion different Giants beat reporters instantly called the fight story bullshit, with big Mike Garafolo co-signing.

Then dropping this news.

So it sounds like Colombo didn't want to get coached up, which is against pretty much the entire Coach Judge culture. Smell ya later Marc! You were probably a Cowboys spy anyway and if Jason Garrett is one too, you know this will be Coach Judge going from Colombo to Garrett.

God I wish that fight was true because then we could relaunch these shirts and I could retire by Thursday.