The NHL knows the quickest way to increase hockey-related revenue is dropping yet another version of a team jersey and if it happens to be nostalgia-soaked, all the better. The league also knows the best way to get folks to drop coin on them is to edge them for days/weeks on Twitter while "leaks" appear and retail/warehouse workers jeopardize their livelihood by sharing illicit pics. This teasing also increases the likelihood that fans buy more than one team's new (old) look.

On Monday, we finally got a look at all 31 versions of the #ReverseRetro jerseys by adidas Hockey and I have some thoughts. These jerseys can be easily categorized. (For a closer look, just click on one of the four division photos in the Tweet above.)

These look like somebody put an assignment off until the last minute then just handed in an old draft with a few paragraphs moved around. You could (basically) already get these jerseys in either Winter Classic or alternate jersey or old school iterations. For all of the possibilities that come with remixing colors and retros, I guess I was just expecting a little more imagination. Plus, those Red Wings sweaters are just dying to have something spilled all over them.

"Let's take the most boring jersey in team history and do that one. Yeah, the style we copied from our division rivals. After copying another team's color scheme."

Golden Knights, Blues, Blue Jackets, Capitals, and Senators. At least they're glaringly a little different. But only Vegas didn't just slap up a logo and fresh coat of paint. The Senators two primary logos since the early '90s are so fucking boringly interchangeable that I actually had them in the first category. But apparently the "turn to your left" portion of the chariot OUI mugshot never appeared on a red sweater. Who knew?

"If you like a team whose nickname hunts down and kills its mascot, boy do I have something for you."

"Hey, these ones are good."

Kings, Coyotes, and Sabres. Using the purple and gold with the Gretzky logo was a masterstroke (fuck 'Forum Blue', it's purple). The Mescaline Mutt is just weird enough to work. And the Shogun logo with the original colors looks pretty sharp.

"I was hoping for something a little better."

Stars, Avalanche, and Canucks. The Stars are just drab, particularly after the nuclear neon sweaters they just dropped. As much I love watching Colorado play, their color scheme/logo/nickname have never done anything for me and neither do these, despite my love of the Quebec logo. The orca logo was always wasted potential and doesn't do any better here among the bleeding color scheme.

"It reminds me of another jersey but I can't tell which one..." 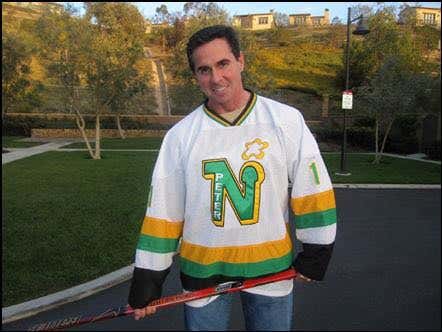 Canadiens, Bruins, and Sharks. The Habs have never combined the iconic CH with a blue jersey before so this felt more inevitable than anything. Was really hoping the Bs moved the Coke Bear from the shoulder to the front of a non-gold jersey because that was the move here. At least it has the sans serif spoked-B instead of the current clunkier version. The original shark (without orange eyes) against the color of an actual shark actually makes gray look good.

"What the hell were the Coyotes thinking? Sorry, I meant Thrashers."

Those colors are no way to honor your franchise's legacy in the American South. Or maybe they're an homage to Winnipeg's weather. Or a subtle tribute to GALAXY QUEST.

Regardless, they have a nice personality.

"The original version should have never gotten past the doodling stage yet here we are."

Just an awful jersey I can't believe ever saw an NHL game but Disney money talks and bullshit walks. It's also nostalgia catnip to people who were children when THE MIGHTY DUCKS movie came out. I think it needs a few more duck masks though…