I'm starting with last night's quarterback poll because it perfectly symbolizes the 2020 Bears. Not because 88% of respondents think Mitch is better or that the Bears fucked up the quarterback decision. But rather because this poll has been 50/50 for basically every week since we signed Nick Foles. There was a bit of movement towards Mitch as we bombed against the Rams but never to the point where it was 9/10. Not even against Mitch in the 2nd quarter of the Falcons game. That such an overwhelming majority of us prefer the inactive backup should tell the whole story. In the interest of being complete though, I'll keep moving.

You might be wondering how a starting QB can only garner 11.2% of the popular vote? Let's take a quick peak at the HOLY MOTHER OF GOD LOOK AT THAT BOX SCORE

We're no strangers to bad quarterback play save for that stretch in '98 when Jim Miller got really hot and some good seasons from Jay Cutler. We're basically conditioned to a 51.1 rating at this point so don't be alarmed if we seem overly calm. Usually we make it up on the ground as evidenced by the HOLY FUCKING SHIT IT GETS WORSE

I'm not going to cry but I will tell you guys that the Bears are averaging 19.1 points, good for next to dead last. So yes it technically can get worse. But more importantly we're on pace to score less than 20 points per game for the 18th time in the last 30 fucking seasons. It's actually a lot worse when you look at it. Orange means you suck: 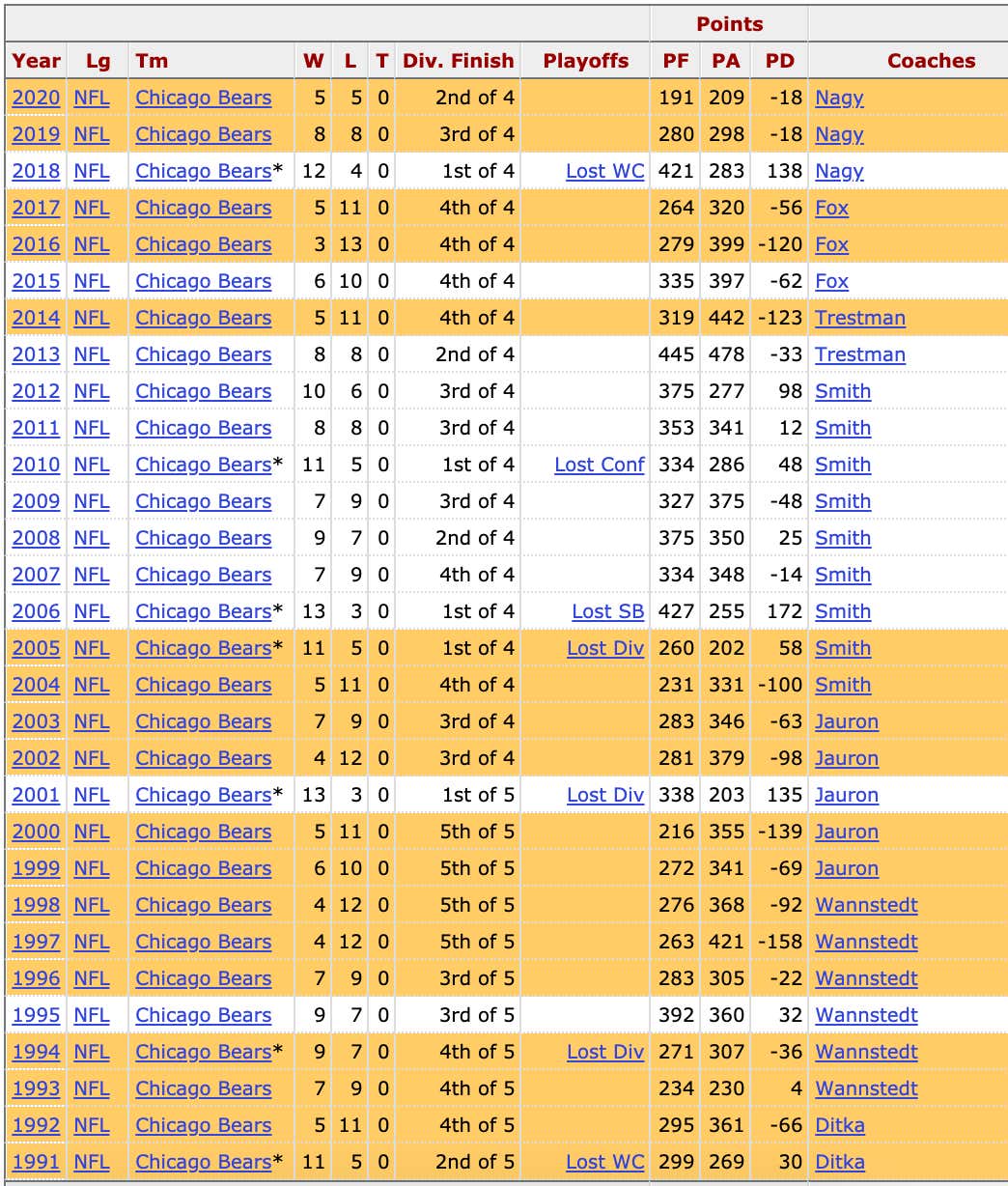 Most of the white belongs to Jay Cutler btw. And if we want to get more specific, there's some MONSTER duds on the board. 320 is the limit to average 20 points a game, which usually puts you in the bottom 5-10 of the league. If you want to get mean, there's much shittier teams than 20/game. Wannstedt was routinely looking at about 2 touchdowns and MAYBE a field goal. Lovie Smith couldn't have inherited a worse group of starting quarterbacks in 2004

It's pretty sobering to realize Craig Krenzel was the bright spot at quarterback for an entire season. And if you think we're delusional now, Krenzel elicited so many Tom Brady comparisons that the Chicago Tribune needed to argue why the two were actually DIFFERENT:

Krenzel was the Bears' fifth-round draft choice this year. Bears optimists cite Tom Brady as a late-round draft pick who turned out to be a franchise quarterback.

One big difference: Brady was a Michigan guy and Michigan produces better quarterbacks than Ohio State.

Indeed, the NFL doesn't always see Ohio State quarterbacks as quarterbacks. Rex Kern led Ohio State to the 1968 national championship, but Baltimore and Buffalo made him a defensive back as the Rams did with Les Horvath, the 1944 Heisman Trophy winner. Tom Tupa has had a long, distinguished NFL career--as a punter.

Art Schlichter, the only Buckeyes quarterback selected in the first round, has spent more time in gambling rehab and prison than he did with the Colts, who drafted him.

Imagine me telling you guys Foles sucks because fellow Arizona quarterback Fred Enke led the 1948 Lions to a 2-10 record while throwing 17 picks against 11 touchdowns. Obviously Wildcats aren't cut out to win over a full NFL season. I wouldn't make it out of this blog alive if I said that shit, but in print sports journalism you got places with that kind of logic. Remember that come Thanksgiving when your uncle starts bitching about all the pictures in the sports section.

Another thing to remember: no matter how bad the Chicago Bears offense is this year, it is impossible to be worse than the 2000 squad that scored a remarkable 216 points. There are 26 teams right now that have scored more points in 10 games than the 2000 Bears did in all 16. At just 13.5 points/game, the 2000 team scored the least amount of points in any non-strike shortened season since the the NFL moved to a 16-game schedule in 1978. The reason? Cade McNown:

And as I'm researching this the news of Theo Epstein resigning has just dropped. If you want any further evidence that Cade McNown fucking sucks, know that his name will forever be linked to Theo Epstein leaving town. I'm looking up his career passing numbers and I think I might just put a fucking hole in the wall.

This was supposed to be a blog about how Things Aren't That Bad For The Bears and I was going to do some cute fun thing about how shitty we've been and how we're used to it. Well fuck that. Things can get a lot worse and it's not just limited to getting your dicks smashed in for 4 straight weeks culminating in a dire Monday Night matchup against a hopeless primetime quarterback. It can get much worse. Now everything sucks.

I'm sorry this blog went off the rails. I have to go meet Erika for a lunch and instead of this being a peaceful way to cheer everyone up, I'm exponentially broken. Being a Chicago sports fan will do that.