Source - Taylor's ripping Scooter for selling her masters ... she says they "were not for sale to me."

Taylor just opened up on the sale in a lengthy social media post, and she didn't have a lot of good things to say about Scooter, the sale, or the process.

Taylor's claiming she would have had to sign an "ironclad NDA" before the first step towards potentially buying her masters -- comparing the NDA to one that silences assault accusers -- and says Scooter never quoted her a price.

She identifies the investment fund which purchased her masters as Shamrock Holdings, and says she would have worked with them going forward, until she learned Scooter would continue to profit off her masters. She says anything involving Scooter "is a non-starter for me."

Taylor says she's continuing to re-record her old music, and also posted a letter she sent to Shamrock Holdings after learning of the sale.

Scooter's company -- Ithaca Holdings LLC -- has reportedly sold the master rights to Taylor's first 6 albums to an unknown investment fund. The buyer reportedly dropped north of $300 million for the deal, which closed a couple of weeks ago. 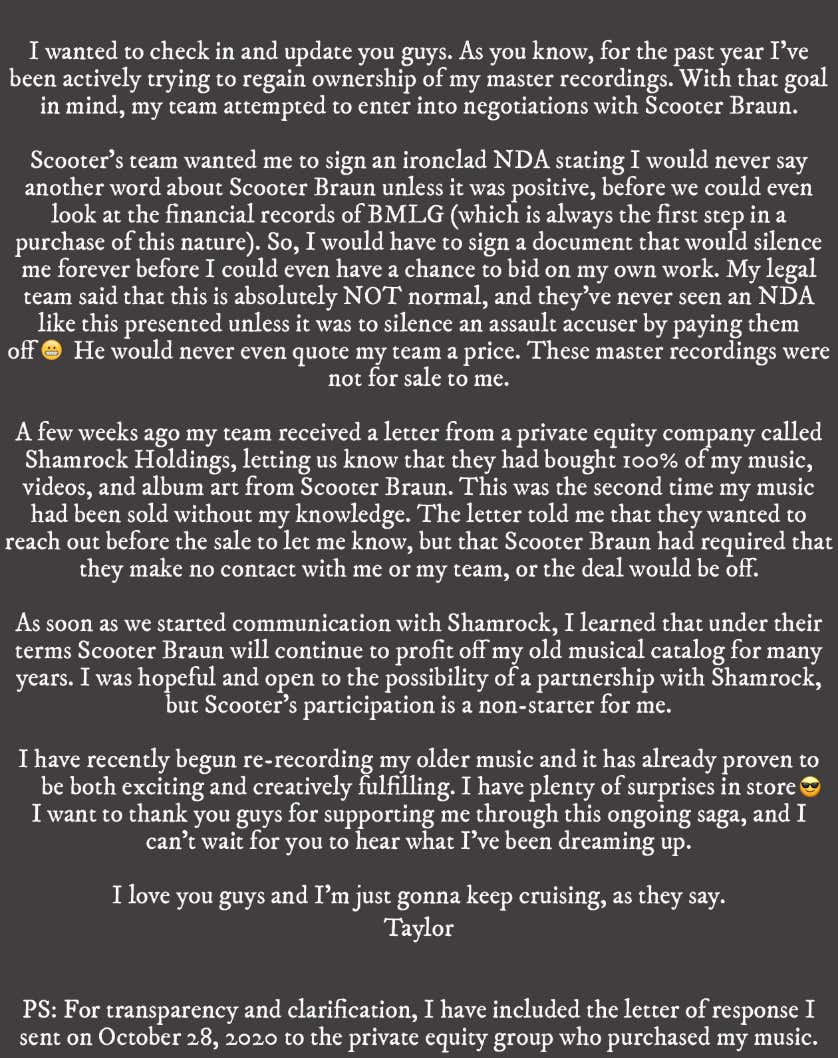 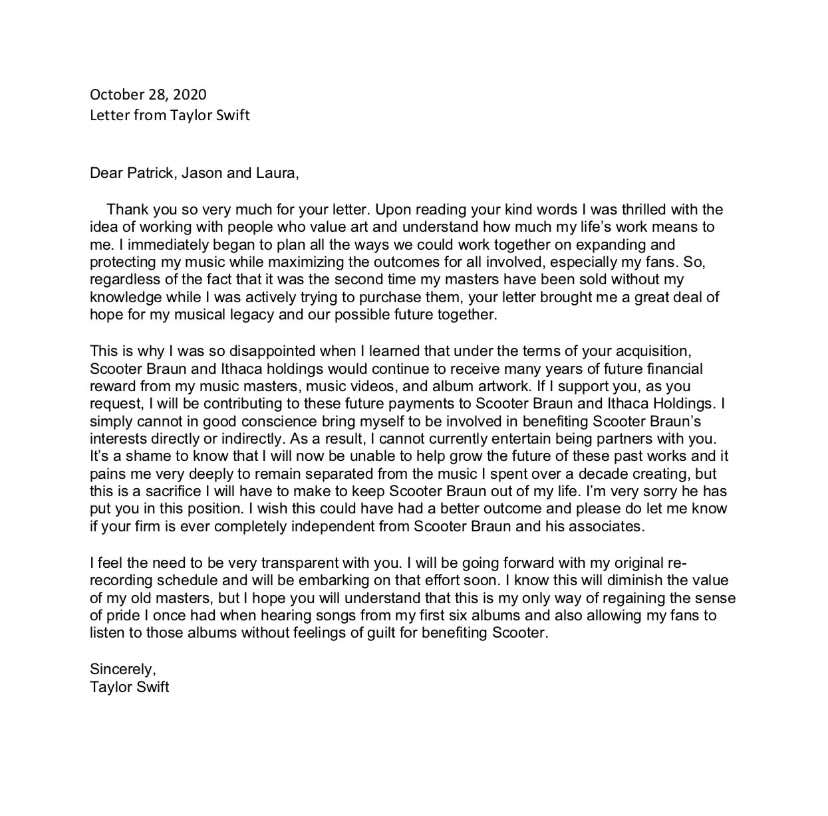 Alright so long story short, Taylor Swift has been in a long, drawn out, public battle to regain control of her masters from Scooter Braun. It's been taking place for years and will likely continue to take place for years based on the the fact that Scooter just sold Taylor's masters for $300 million to an investment firm and will continue to financially benefit off them for the foreseeable future. Something Taylor is adamantly against as mentioned in her letter to the new owners…

(For more on Taylor's history with Scooter, click here.)

Now, there are two ways to think about this and both of them make sense. The first is that Scooter Braun is a pompous asshole. (We know this to be true based on the way he handled himself during the Call Her Daddy situation.) He sold Taylor's masters without telling her then wanted her to sign an NDA saying she wouldn't talk shit, which is arguably the softest most "LA" move of all time. Here's what Taylor had to say on that…

Was he legally obligated to tell her he sold the masters? Of course not, but he should've given her the opportunity to look at her own financials so she would've known where to come in with a bid. He obviously was never going to sell her the masters in the first place which makes him…an asshole.

The second way to think about this is the 'Anti-Taylor-Swift' way. The argument goes like this…as an adult, when you enter a contract, you can't bitch your way out of it. That's not how things work. It doesn't matter how bad the contract is or how terrible the person on the other end is, by signing your name on the dotted line you are stating that you understand and agree to the terms of the agreement. It's as simple as that.

Personally, I think they're both being babies. Good on Taylor for airing things out but at the end of the day, and I hate to do this, we're in the middle of a pandemic. No one wants or needs to hear two multi-millionaires air out their petty problems when 15 million American's are out of work. The good news is Taylor will allegedly be re-recording her first five albums starting sometime this month…

I'm not sure how good they'll be considering they'll be done out of spite, but that's neither here nor there. Hopefully these two figure out their problems so we don't have to hear about them anymore. Thoughts and prayers to them both.