With using absolutely no sarcasm or no hyperbole, last night NBA Twitter was wildly more entertaining than watching the Bears/Vikings. Granted both things were complete shitshows, it felt right getting the ridiculousness of the offseason in our lives again. Obviously the biggest story is that James Harden wants to be traded from Houston to Brooklyn. So much so he refused to accept $50 MILLION. Again, just straight up told the Rockets to shove $50 million up their ass.

Hell, he doesn't even give a shit what happens to the Rockets. Just wants out of Houston.

That just got the night started. Why? Because actual news. That's not why NBA Twitter can be so fucking entertaining. James Harden decided to Instagram something so simple, so pure, that it led to a debate for hours:

I can't stress how stupid it is and why I fucking love this stupid thing known as social media. Taking a bottle cap off to show that either everything is true or someone in a report is lying. The NBA version of blue or black dress. It took over Twitter with people just trying to break down this Instagram, which also 100% was an ad. You can't replicate that shit anywhere else besides NBA offseason. But then it goes even more when you have Travis Scott doing this:

Then in the middle of all this, you really just have to give credit to everyone involved here. A real trade involving the Rockets!

Real credit to a big J in Woj for knowing what he was doing here. Starting a tweet off in the middle of all this shit with 'The Rockets are finalizing a trade.' EVERYONE lost their shit reading that thinking it was THE trade. Russ or Harden were gone. Maybe both. Nope, just Robert Covington to the Blazers.

Oh but we're just scratching the surface of the night. You see, NBA Twitter and the offseason is about bizarre stories to go with the rumors. You can't just have trade rumors or tampering stuff. Nope. You need Kyle Kuzma deleting his Twitter

Correction: You need Kyle Kuzma deleting his Twitter hours after being rumored to be traded to the Pelicans for Jrue Holiday, which was declined and obviously Holiday went to Milwaukee.

NOPE! Correction again. You need to have Kyle Kuzma tweeting out about how he's going to remind all the haters about not respecting his name. Because of course. Why not? This is just exactly how I assume Kuzma always talks.

But to really make it truly hilarious? Oh Kuzma was giving away PS5's 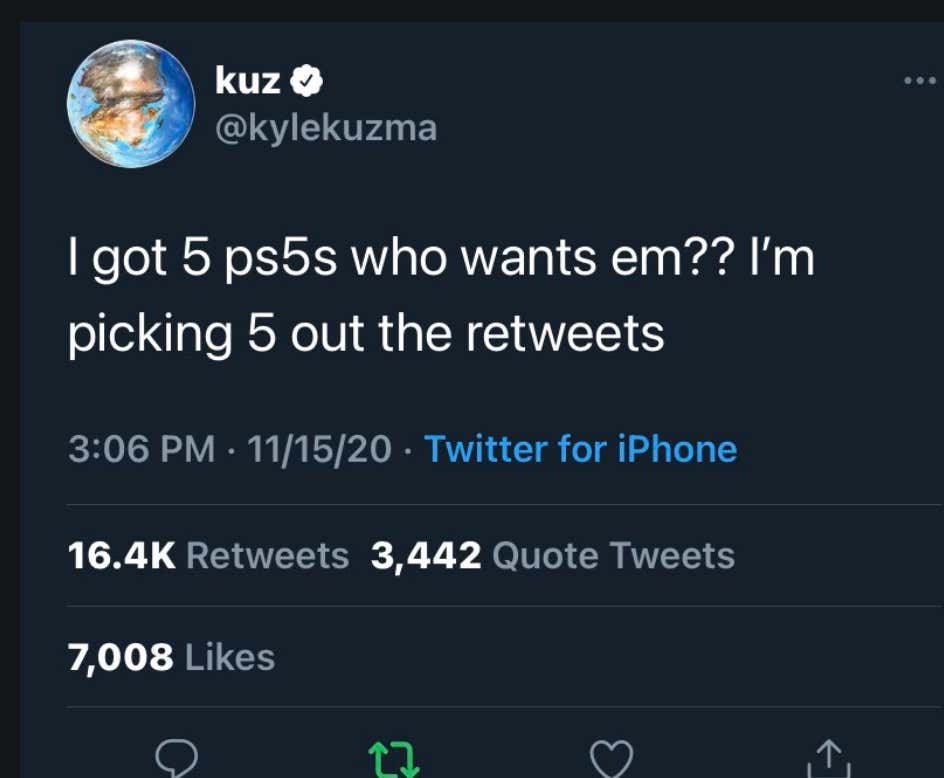 That might be the biggest cocktease out right now. You can't be offering to give away PS5's and then just ghost everyone. What happens if you contacted someone? Now they gotta write to the Lakers like that old book we got in the 90s that had teams addresses and you thought you were sending a letter actually to a player.

Let's take a quick break for some Selena pictures:

Sure, why not? This is what makes this shit so great. You just don't know what to expect. Everyone is out here talking about James Harden to the Nets and we get hit with Jimmy Butler dating Selena Gomez? I fucking love it. I don't care how stupid it is, I'm entertained by dumb things. This entertains me until there is actual basketball being played. There's just no offseason like the NBA. They do it better than anyone else with all these stupid ass stories and the fact that their players are marketed all over the damn place. Also helps that they are allowed to post shit on social media and we have all access to it.

But it felt right. Again, for one of the rare times in 2020, we were up all night seeing what the fuck a bottle cap Instagram video meant. This is only going to go more off the rails with the draft and more trades.