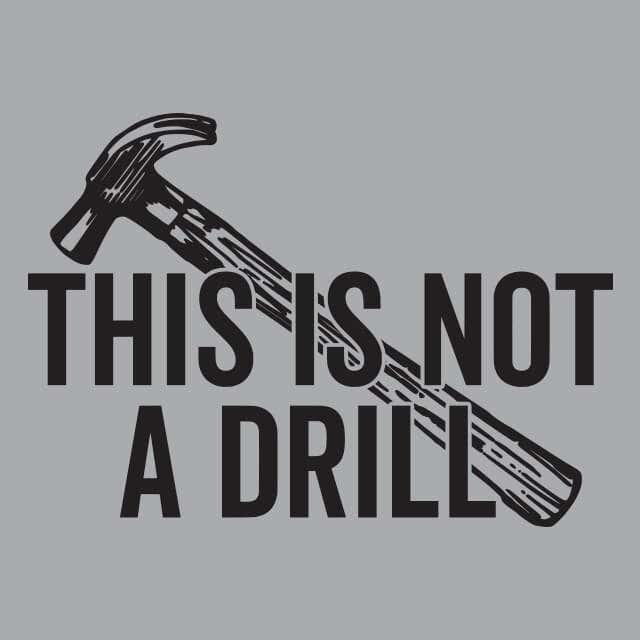 (I googled "This is not a drill" expecting to find an alarm or some gif I could use. Instead I found this cheesy gift shop t-shirt and fell in love with it. Get it? It's a hammer. It's not a drill. Brilliant. I bought 6).

This should be on the front page of every newspaper and be the lead story on every news station in America today. Survivor is on Netflix. It actually officially came on yesterday, but I didn't want this momentous news to get swept away by all the NFL stories. Again, SURVIVOR IS ON NETFLIX.

Now, past seasons have already been available on CBS All-Access or Hulu, but being on Netflix is a whole different ball game. Way more people have Netflix subscriptions than any other streaming services (I assume, no numbers to back this up). And Netflix is just such a huge part of society that this feels like a big milestone for Survivor. It can introduce it to an entire new audience.

"Alright, should I just turn on The Office?"

"Eh, I had something else in mind."

"No I actually think it would be really romantic if we made love as 18 people stranded on an island have to survive 39 days by outwitting, outplaying, and outlasting each other for a $1 million prize."

The two seasons now available on Netflix are Season 20: Heroes vs. Villains and Season 28: Cagayan. These are the two best seasons so it makes sense. If you're already a Survivor fan, throw either on and enjoy the ride.

HOWEVA, if you are new to Survivor and want to use this as an opportunity to get in the show, then you must start with Cagayan. Back at the start of quarantine, I wrote my Survivor binge guide and listed Cagayan as the first season you should watch to get hooked on the show. You can catch up on that here.

Is it possible that CBS saw my blog and decided to get Cagayan on Netflix? Obviously, that is exactly what happened.

Cagayan is the most entertaining season with all new players in show history. They are split up into three tribes bases on the traits they are most associated with: brains, brawn, beauty. There are 6 players in each tribe.

Here are just some Survivor basics you should know without spoiling anything.

-The game starts with players separated in tribes, three in this case.

-There is usually a reward challenge (for food or something) and then always an immunity challenge. The losing tribe at the challenge goes to Tribal Council where they vote someone off.

-Sometimes there's a tribe swap. New tribes get made and new alliances must be formed.

-Then there's the merge. That's when it switches to the individual portion of game. There are now still some reward challenges and all immunity challenges are individual. One person wins immunity and is immune at tribal council. People voted out starting at the merge (sometimes before, sometimes after) join the jury.

-At the end of the game, the jury (between 7-10 people usually) votes for the winner. Final Tribal Council consists of either 2 or 3 finalists depending on the season.

-The game will usually feature twist advantages players can find or earn. The biggest example is hidden immunity idols. If found, a player can play it at tribal council and all votes against them will not count. In almost all cases, the idol is played after the votes are cast but before the votes are read. So there's an element of risk to when you play it. However, in Cagayan, the idol has a twist. Just know that this is not the case for most seasons.

Those are all the basics you need going into if you are truly a novice. If you like Cagayan, I suggest using my binge guide to catch up with more seasons on Hulu. The other season on Netflix is an all-returnee season. While it's an amazing season on its own, it obviously is even better if you know the characters coming into it. It's like watching all the individual superhero movies and then watching The Avengers.

I do seriously think this is big for Survivor. The show has a loyal following and the ratings are consistent, but this is a way to bring in new audiences. Also with Survivor on production delay due to the pandemic, we need all the Survivor we can get.