As of this morning the Arizona Cardinals find themselves atop the NFC West at 6-3 with a +56 point differential and an undefeated record against division opponents. This is the same division that has produced the last two Super Bowl representatives for the NFC and is widely considered the best division in football. But being at the top of a competitive division 10 weeks through the season is hardly the only criteria for MVP. In fact, neither are the individual stats, which we'll dive into in a moment.

MVP for all sports has always been and will always be media driven narrative. It's certainly not the correct way to go about things, but it is the way. If it always just went to the best and most deserving player, Michael Jordan would have a larger trophy case. As would Peyton Manning. As would Mike Trout and LeBron James. Hell, Aaron Rodgers would have a couple more to his name. But we like to reward "new" as much as "great." Russell Westbrook won his MVP the second Kevin Durant signed with Golden State. Kyler has been great, I firmly believe he's deserving to be in the conversation this season. But should he be the frontrunner?

Ehhh, I don't know about that one, Jim.

The narrative, right now, is in his favor. Coming into the season, all you heard about was that Russell Wilson had never even received a single MVP vote. The Seahawks got off to a hot start, he was leading the charge. That has since cooled off as the Seahawks have lost three out of their last four games which really tells you all you need to know about how the narrative industry works. Russ is second in yards, first in TD, second in yards per attempt, third in completion percentage and has completed the second most 40+ yard passes. The Seahawks are losing, he wasn't great against the Rams yesterday, but their problems aren't exactly on the offensive side of the ball.

Josh Allen has thrown for a League-best 2,871 yards for his first place Buffalo Bills. He's sixth in TD, seventh in Y/A, and his 41 completions of 20 yards or better lead the NFL. Much like Kyler, Josh Allen also beat Russell Wilson. Two knocks on Russ, a plus for Josh and Kyler, respectively. The Bills, however, find themselves as just a .500 team (3-3) outside the confines of the AFC East (4-0.) If I've had to hear about that being a massive negative for the last *checks calendar* 20 years, you better believe it should still be a major talking point this year as well. I'll make sure of that personally.

In year 16, Aaron Rodgers has the Green Bay Packers at 7-2, tied for the best winning percentage in the NFC, and he even held a nifty lead against the Tampa Bay Bucs for a brief period of time. Surely that should count for something, no? Despite the offseason talk of the Packers outright refusal to draft a wide receiver in the deepest wide receiver class in recent memory, Rodgers keeps doing Rodgers things. Sixth in yards, fifth in Y/A, second in TD, the fourth most 20-yard completions and the most 40-yard completions in the NFL. Aaron Rodgers, as it turns out, is actually good at football. Who knew. With the Packers I think people see their failings in the postseason and hold that against Rodgers' regular seasons. He doesn't have the new, shiny toy factor and we seem to know it wont matter come January so why waste our time. To be clear, this is a tremendously dumb way to look at things. I don't think Rodgers has been the clearcut MVP this year, but he's absolutely near the top of the list.

Tom Brady wont win it, though he finds himself fifth in yards, fourth in TD, is completing passes at a respectable clip and is pretty much living in rarified air weekly for a 43-year old. However, you can't get swept by your division rival in a year with a Super Bowl or Bust mentality and stick in the MVP conversation. Week 1, new team, new system, new receivers, that's an excusable loss no one holds against him. Last week? All but sealed the deal. Tom doesn't care, he didn't go to Tampa to win MVP. The trophy he set his eyes on is still very much in play, the Bucs are tied for the most wins in the NFC and he blew out Rodgers' Packers. Certainly deserving of consideration but also very clearly not in contention.

As for Kyler, he has the narrative - he was short, remember. He beat Russ and stripped him of his narrative crown. He will have another chance to beat him this week. He beat Josh Allen, everyone knows when you beat another MVP candidate you automatically vault them in the MVP race. He'll have two cracks at the Rams to put away the division. Claiming the NFC West would all but lock him into the top three for this year regardless of his personal stats. Prior to yesterday's game, Kyler was already outpacing Lamar's MVP campaign from a season ago.

And then yesterday he put up 245 yards in the air, another 61 on the ground, three total TD a turnover. His only passing TD being the immediate frontrunner for play of the year, one that was more impressive on the receiving end of things but that hardly matters here. Kyler's a quarterback and as we know this is a quarterback's League and a quarterback's award. He scrambled and threw that pass, he gets the credit and that play to headline his MVP case. He has 27 total TD (17 passing, 10 rushing), which is two behind Russell Wilson's total. He has 2,979 combined rushing and passing yards, also less than Wilson's 3,114 total. And with both the Seahawks and Cardinals sitting at 6-3, set to square off on Thursday night for sole possession of first place in the NFC West, it's hard to say Kyler has overtaken Russ for MVP. In fact, it's hard to have either at the top of the MVP leaderboard. Mostly because neither of them are better than... 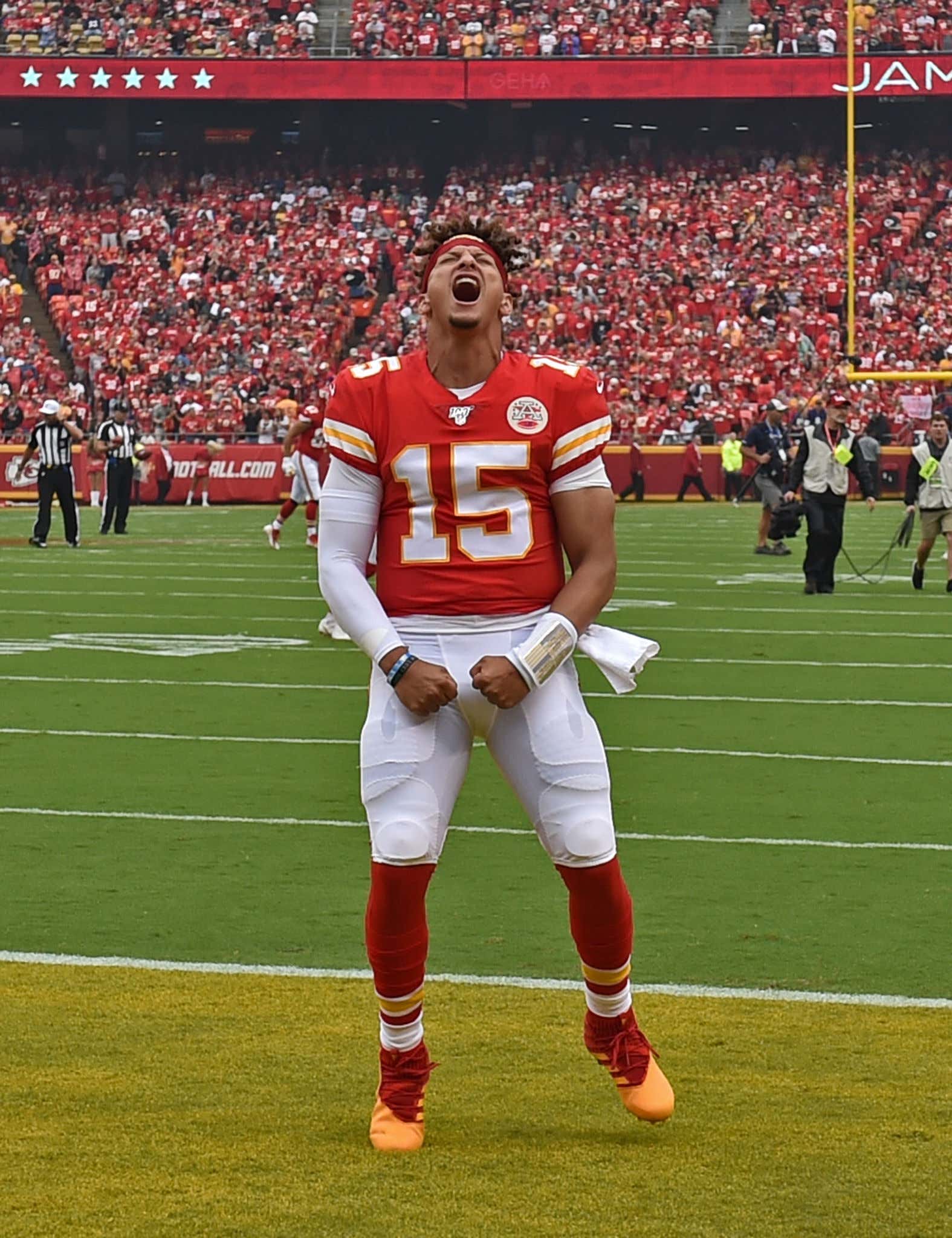 Remember at the beginning of the blog when I talked about LeBron and Peyton and Trout? Yeah, that's Mahomes right now. He's the best in the world and no one's particularly close. I know you're ready to argue that someone is close. You would be wrong. And that's ok. 2,687 yards, 25 TD, ONE (1) INT, 38 passes for over 20 yards, and he's also rushed for 171 yards and two tugs on top of everything else. Yes, he has Andy Reid and weapons galore. I know that, you know that, everyone in the world knows that. Why people act like Mahomes is the first quarterback in NFL history to play with other great players is beyond my comprehension. Alex Smith played with these same weapons and two real legs and the Chiefs offense didn't look anything like this.

Last year a mid-season injury derailed his quest to win back-to-back MVPs. He responded by winning Super Bowl MVP instead, decent consolation prize I suppose. At 8-1, Mahomes has two more signature games to put this award away in his closet once and for all: November 29th against Tom Brady and December 20th against the Saints. Both on the road, both in primetime, both will be billed as "Super Bowl previews." He already beat Lamar on the road, he already beat Josh Allen on the road. He wins both of those and has the Chiefs in one of the top two spots in the AFC, I can't imagine anyone else winning MVP in 2020 and agreeing that it was the right decision.