A lot of people in Chicago are going absolutely bananas after Buster Olney's Sunday report on the MLB offseason speculated it's Selling Time for the Cubs:

...The Cubs are signaling there will be significant turnover on the roster, with a willingness to move almost any veteran -- as well as just about anyone from the core group of position players who won the 2016 World Series, including shortstop Javier Baez.

Rival evaluators are closely following the Cubs' handling of Kris Bryant, the 2016 NL MVP who will make something in the range of $18 million after posting a .644 OPS in 34 games in 2020. Bryant will be eligible for free agency next fall and the Cubs have made him available for trade in the past, but some officials wonder if the Chicago can find a trade partner before Dec. 2 given Bryant's 2021 salary, which may be beyond what almost all teams are willing to pay.

There's two parts to this: the first part where we talk about a willingness to move "just about anyone" and then the 2nd part about Kris Bryant. Let's start with the lower hanging fruit and that's KB.

Obviously he's on the trade block and I mean OBVIOUSLY. Use your noodles guys. Exhibit A is the fact that he's objectively produced less over the last three years. Injuries, COVID, fatherhood, Scott Boras, a near-unanimous MVP award, the service time controversy, and a bunch of other ingredients all mix together for one disgusting stew of bullshit. And objectively, Kris Bryant hasn't given the Cubs a reason to throw the book at him with an extension. You couldn't reasonably begin to argue that he's as deserving as Anthony Rendon or Manny Machado for a mega deal. Not when KB is fresh off a 2020 season that saw him finish 31st out of 35 MLB 3rd basemen with a 76 wRC+ meaning he was 24% worse offensively than your average 3rd baseman. For context, Todd Frazier had an 82 wRC+ while David Bote posted a 92.

Long story short: we're moving to a contract environment in MLB that demands a return on investment. We're talking Sure Things folks, or else it's a short deal. The days of just throwing extensions at a guy like KB because of major career defining moments is gone. At least in the sensible front offices, I just don't know how you map out his production and see big value. With one year left in arbitration, the question becomes whether the Cubs are competitive enough to NOT trade KB this offseason and the obvious answer is No. If you watched the playoffs, you would easily conclude the Cubs are several steps removed from the top of the league.

So do you close the gap this offseason and make a run? Or do you admit that there's more significant work to be done to get back in pennant contention? If it's the latter then you naturally make Kris Bryant available for trade, and your selling point is you use his 2020 underperformance to lowball his 2021 arbitration salary. Then spin that as a positive to potential buyers because "He's much better than his 2020 numbers." There's your playbook to get more for less.

Makes me sick I had to write all this but I've taken a lot of time to just be honest with myself as a Cubs fan. You're either in a position to win the World Series or you're not. We've spent so much time in our lives at the bottom of the barrel that we've convinced ourselves that "competitive" seasons are good enough. Sure it's an upgrade, but don't abandon championship standards for the sake of convenience. Sometimes you have to make hard decisions and moving on from Kris Bryant would be one of those decisions.

While on topic, I want to be clear that John Baker mentioned a lot of people in his thank you note to the Cubs organization. Kris Bryant was not one of them. Baker recently announced he was leaving his position as the Cubs' mental skills coordinator - a position that put him in direct & intimate communication with everyone in the clubhouse. Am I a crazy person for thinking KB should be one of the first names out his mouth? 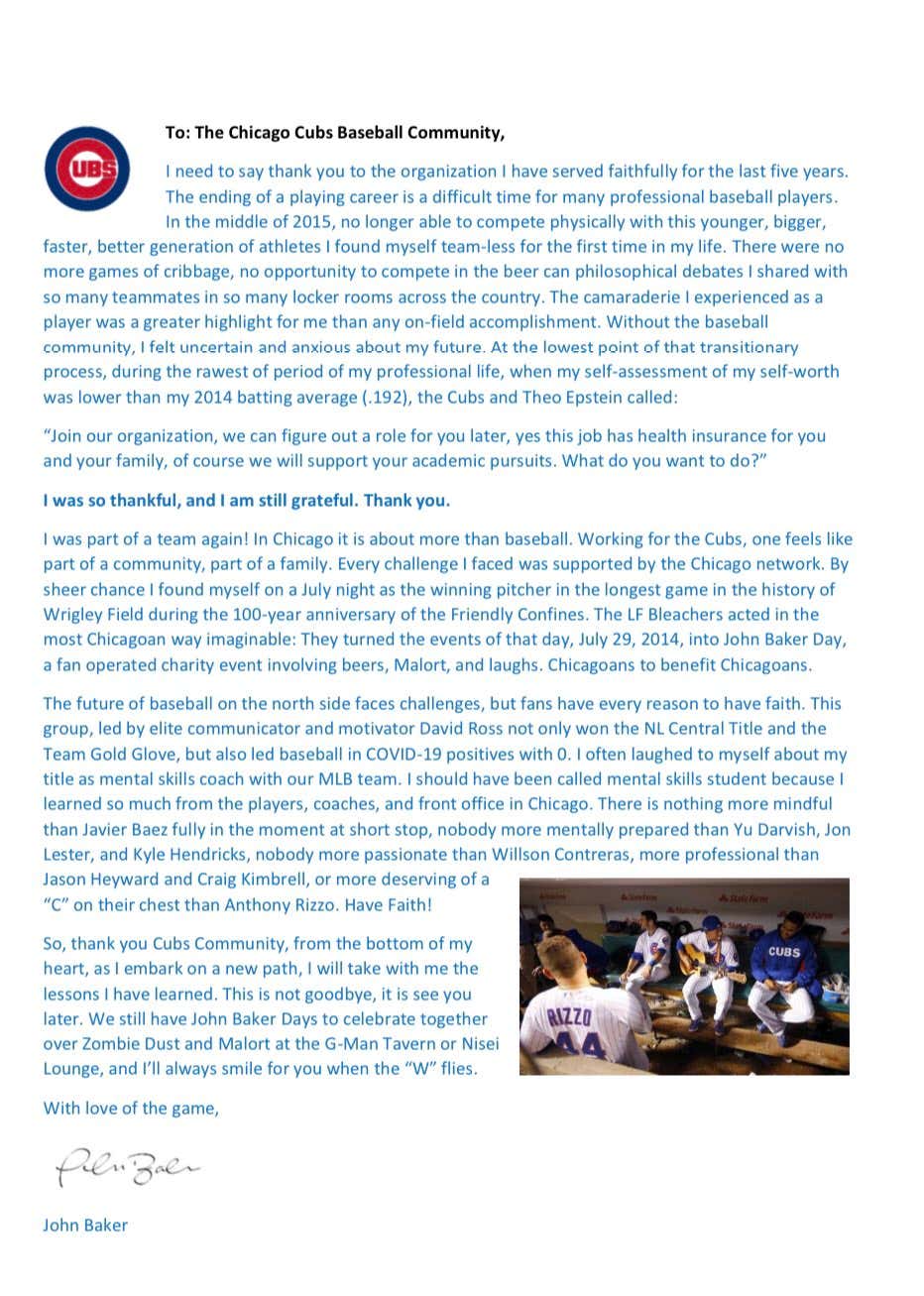 Sad stuff but that's the world we live in: me overreacting to social media posts regarding a couple dudes that are deeply involved in the professional baseball organization I voluntarily choose to identify with. So that's where we're at in my brain. KB has to be aggressively on the chopping block. 783 words later I am ready to address to 2nd part of the 1st topic of this blog. Stay with me folks.

The Rest of the Roster Is Up For Grabs Too: Or "just about anyone" I should say, and that also makes sense but not as much as the Kris Bryant situation. In this case we're going to add every other player to the trade pile except: Kyle Hendricks, Yu Darvish, Ian Happ and David Bote. Before you revolt, let me quickly say Hendricks & Darvish are on undervalued contracts. Never thought we'd agree about that with Darvish but that's an objective fact. Hendricks is also objectively untouchable with 4 years and $44M left. Ian Happ joins the small group after putting up ridiculous numbers in CF with 3 years of control left while Bote is getting paid nothing to be league average for the next couple years so there's basically no trade market for him anyways. Everyone else and I mean Everyone Else is eligible.

Unfortunately yes. Not that I'm running him out of town but if Rizzo has one year left at $16.5M and we know another contract would break a bank the Ricketts family suddenly doesn't have, then logic puts him on the trade block. But this would be significantly different than KB because Rizzo's strong sentimental connection and leadership value are soooooo fucking big. You'd literally need a prospect package that would set the Cubs' farm system up for 3-5 years. I'm talking a blockbuster trade for the ages, and generally 1st base doesn't command that kind of market attention because there's a lot of sluggers these days. If you factor in a trade & extension, then maybe it becomes a much greater possibility. Are the Miami Marlins completely out of the question? I fucking hate myself for talking about this, but I owe it to you guys to be honest. That's my duty.

Same logic applies to Javy, Schwarber, Willson and anyone else you want to trade for all the reasons I mention above. Picture a scenario where attendance in 2021 is again limited from COVID. The Cubs are so dependent on cash flows to finance the Ricketts's budget because they're so heavily leveraged in Wrigley. They're taking the suspension in operations much harder than I think the public generally expects, and it's inevitable these challenges show up in the 2021 payroll. But in the same vein, without attendance, this could be your year to make really difficult decisions. This could be the season you drop down into the low/mid-70's win totals to retool a farm system and get depth. If you're thinking logically and away from the 2016 World Series emotions, that would be the industry-approved smart move if you want to re-open a long-term competitive window.

But What About The Awards? - lol congrats to our gold glove winners. Can't wait for that to come up in twitter arguments when someone is defending Javy Baez's sub-.700 OPS the first week of May.

Untouchables - I mentioned this above but worth circling back. You keep your top 2 pitchers in the mix because pitching is impossible to find and you've got a lot of time at sub-market value left on the Hendricks and Darvish deals. Then you back fill rotation with cheap arms and some projects. But objectively, Darvish and Hendricks need to anchor the rotation through what promises to be an infuriating 2021 with hopes of a rebounded 2022 and fully revamped 2023.

After that you can use Bote's 2020 to justify a KB trade without immediately surrendering. Bote can start 100 games and not completely send us back to the early 2010's. Maybe.

And maybe Ian Happ builds big off his 2020 and the Cubs can extend him. Maybe he has a 6-7 year future in the outfield and maybe we can pick at least one position player to hang around for consistency purposes. Obviously we'd like that to be Anthony Rizzo through the end of his career but who knows at this point. Ian Happ is in a unique position where no one really knows his ceiling yet. The Cubs in Theo's early tenure would take advantage of that asymmetry, but now I feel like we're going to drag our feet through his arbitration years. In any even it would be stupid to put a For Sale sign outside his house. He stays.

Long-Term Planning - Last but not least in this therapeutically long-winded blog is a focus on the future. And for all intents and purposes it appears that Theo Epstein will not be in that future. My brain says it's Jed Hoyer's team to take over while Jason McLeod gets his shot this offseason or next to start his GM career. Right now he's a finalist with the Angels and no doubt will get his own post when Theo officially breaks up his crew. The fact those 3 stuck together as long as they have should be the subject of a major motion picture at some point. For now, we can more readily accept this is their last season running the power option together.

That blows. I'm honestly not ready for this realization. On a personal matter, I've never been as comfortable as a fan as I've been knowing Theo & Co. make all the decisions. For as long as I've been blogging about the Cubs on this website (June 2013), I've carried this confidence with me. It's been a shield to an audience that loves to remind you that your team is hopeless and pathetic.

Guess what motherfuckers? I have Theo Epstein on my side… - Me in every argument since October 2011

The unfortunate reality is that our day is coming to an end and I'm getting my emotions prepared. It definitely sucks but here's my big consolation:

The same logic I've used over the last near-decade with Theo still applies today, if not even more so. Yes he's been the guy to do the rebuild. He's been the guy to bring home the World Series. To put the Cubs in the playoffs 5 of the last 6 years. We've enjoyed more success under him than 5x as many years under any other regime. And now we get to apply that logic one more time.

He's the best GM in the history of baseball, and he's the guy preparing the Cubs for another long-term window. You couldn't ask for a better brain or leader in this game to execute a successful exit strategy. It's a new challenge for him and we know how much this dude loves new challenges. By my count he's basically conquered every single one, so I suppose in this case I'm feeling pretty good about our future. Even if he's not involved after 2021 and the short-side of it sucks. I know deep down we'll be fine in the end.

That's how it works when Theo's on your side.

That's how it's always worked.