Thor has arrived in Wakanda!!! Oh excuse me, that's Port St. Lucie. It's easy to get those two centers of technological and cultural innovation confused.

Fuck it, we're playing the clip!

And the "Immigrant Song" remix!

Truth be told, I have no idea where Noah should be in his rehab from Tommy John. You could tell me he's ahead of schedule, on schedule, or behind schedule and I'd believe every single one except for behind schedule since nothing bad happens to Steve Cohen's Mets. Noah throwing a ball, albeit not at full speed, seems like a great update as does him posting a video where he's shirtless since he clearly wants to show he's in shape while the dripping sweat shows he's been throwing for a while.

To be honest, this video isn't even the most exciting stuff Mets fans have seen out of Noah this week since these three things on Twitter trump any sort of baseball thirst trap considering his ahem relationship with previous Mets ownership. 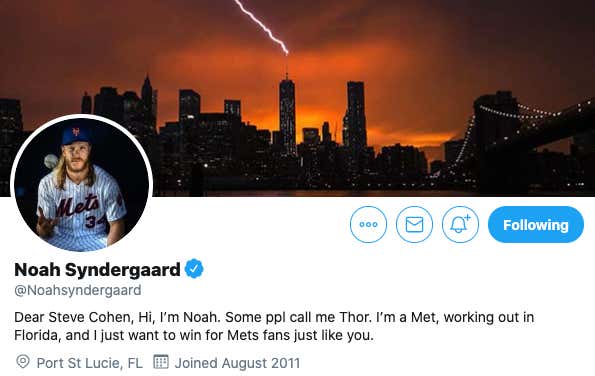 You KNOW Noah is serious when he is putting Port St. Lucie as his location during the offseason, Tommy John recovery or not. The Cohen Effect is so strong that even Big Sexy is trying to get some of Straight Cash Cohen's cold hard cash.

So for those keeping track at home, the Mets rotation currently includes the best pitcher in baseball (regardless of what the 2020 Corona Cy Young trophy says), Marcus Stroman pitching for his next big contract with what should hopefully be an actual Big League defense behind him, an impressive David Peterson, potentially a motivated Seth Lugo trying to prove he's a starter, and 1-2 spots that will have no shortage of options considering every other MLB team is looking to shed payroll after taking a bath in this coronaseason while the Mets are looking to become, in Sandy Alderson's words, an iconic franchise as well as a motivated Noah Syndergaard once he's ready.

Nothing but good times in Metsland these days! Now play the clip that is boner inducing on multiple levels!

No, the other one!