Source - An amateur cyclist was rushed to hospital to have thousands of thorns removed after crashing into a bed of cacti during a race in Argentina.

Diego Moreno - who hit a pothole when riding at the back of a pack of three in the City Park area of Buenos Aires - was attended to by locals following his fall.

Those assisting the cyclist removed thousands of thorns from his body, but Moreno was admitted to hospital to see the remaining spines removed.

I genuinely can't think of a more infuriating accident that falling into a cactus. Imagine how pissed off that guy must've been. First he hits a pothole, then he lands in a cactus?!? A cactus!?!?! What are the chances? That bike ride was probably twenty miles long and he landed in the one spot that would've turned him into a porcupine. It wasn't like he got a few needles either, he was covered head to toe.... 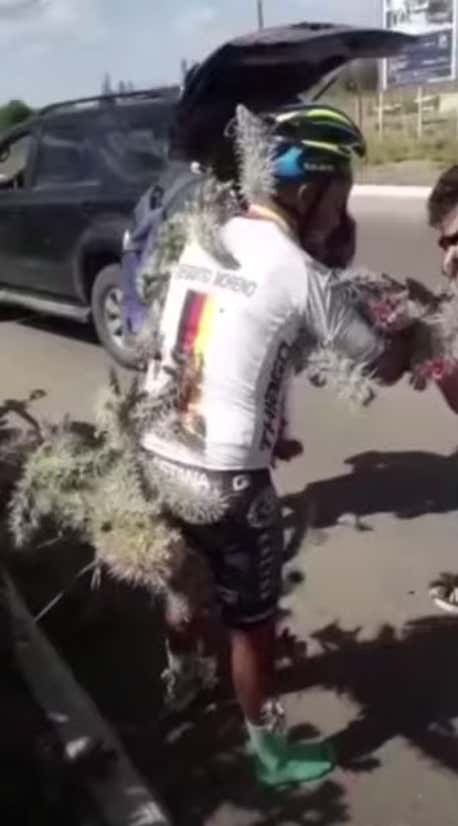 As much of a nightmare as it was, things could've been much worse. Here's what he had to say about the accident...

Moreno was thankful that his injuries were minor and claimed that his 'glasses' and 'helmet' saved him from being blinded. Moreno told local press: 'We were going with three more cyclists, I was last in line.

'I didn't see a small crater in the asphalt and I hit the pothole. 'Thank god I was wearing glasses and a helmet and I didn't injure my face or head. 'Because the way the spines got embedded in me, it could have blinded me.'

^^That's called being a 'glass half full' guy. If that was me I'd already have dedicated the rest of my life to eradicating cactus off the face of the earth. Good on Diego for the positive attitude.

The whole thing reminds me of when Ryan Dunn (RIP) rode his bike into a cactus during the Jackass days. What a moment. Have a great Thursday, friends!