Author's Note: This is an updated version of a blog originally published three years ago, on the 20th anniversary of the Montreal Screwjob. I've fixed up some formatting/grammar and changed a few things up along the way. Think of it like the '97 Special Edition re-release of Star Wars. It's my original vision finally realized.

The main event? Bret "The Hitman" Hart, defending his WWF Championship one last time before leaving for World Championship Wrestling, against his most bitter rival - Shawn Michaels.

In the months (and really years) leading up to this match, there was tension building between Hart and the WWF due to their treatment of him as World Champion, and Bret had some valid grievances. Really, I could bring up oodles of examples to back up Bret's frustration, but the most obvious would be the finish of the WrestleMania IX main event, which saw Yokozuna defeating Hart without much issue....only to be dethroned by Hulk Hogan in 22 seconds immediately afterwards. That should tell you all you need to know. Outside of that, there was a lot of unkept promises of legends putting Bret over and "trial runs" of others in the top-dog spot, leaving Bret questioning why he wasn't good enough to be the true face of the company.

Bret developed a rivalry with Shawn Michaels both in and out of kayfabe in the mid 90's, largely due to the formation of "The Kliq" - a collection of guys that'd ride together/look out for one another which consisted of Shawn, Scott Hall, Kevin Nash, Sean Waltman (X-Pac), and Hunter Hearst Helmsley. The Kliq was liked by The Kliq, and pretty much nobody else, because, well, they were drug-addicted party animals who were complete and total assholes to anyone and everyone in their path.

Shawn and Bret were paired together on-screen as the workhorses who'd deliver phenomenal match after phenomenal match against each other in every city around the world, and while the extracurricular habits of Michaels never played a roll in the 20x20 - they always irked 'The Hitman', especially while Shawn was involved in the main event scene. He wrote about it pretty extensively in his book, and detailed his hesitation in seeing the championship around Michaels' waist due to the way he treated others in the locker room. Still, Bret put him over massively in the Iron Man match in the main event of WrestleMania XII, and after the final pinfall, Michaels told Earl Hebner to "get Bret the fuck out of the ring" - not exactly helping his relationship with Hart. 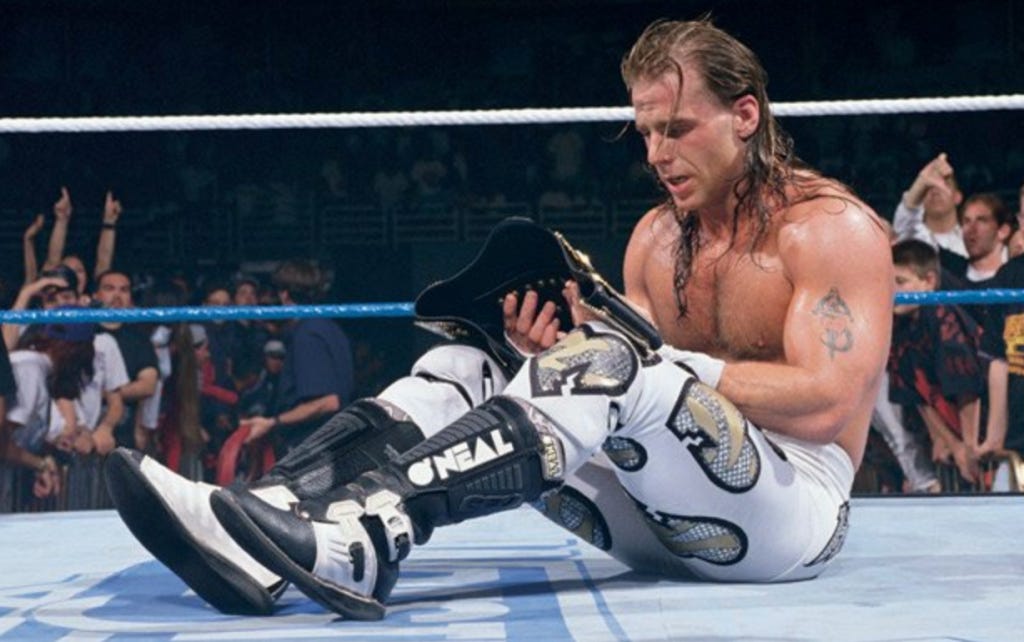 By 1996, Scott Hall, Kevin Nash, and Hulk Hogan famously made the jump to WCW, and Vince McMahon was panicking. He offered Bret Hart a "name your price" contract to lock him up, but the "name your price" basically had a $700,000 ceiling (being that's what the WWF's top talent were making at the time).

Eric Bischoff offered Bret a $2.8 million dollar per year deal, and Vince, in his desperation, countered with a $1.5 million dollar per year, TWENTY-YEAR contract. Bret accepted, but it was a short-lived deal that Vince decided he wouldn't honor a year into it. Legend goes, Vince only went back on his word when Shawn sat down with him and requested he pay nobody other than The Undertaker more than him. So Vince told Bret to get in touch with WCW, and see if their offer were still available.

Before this, Hart was supposed to beat Michaels for the WWF Championship, but the title was vacated after Shawn walked away and "retired", citing a "lost smile" on-screen, and a knee surgery off-screen. Nobody backstage believed his story, and he miraculously wasn't required to get surgery before returning. 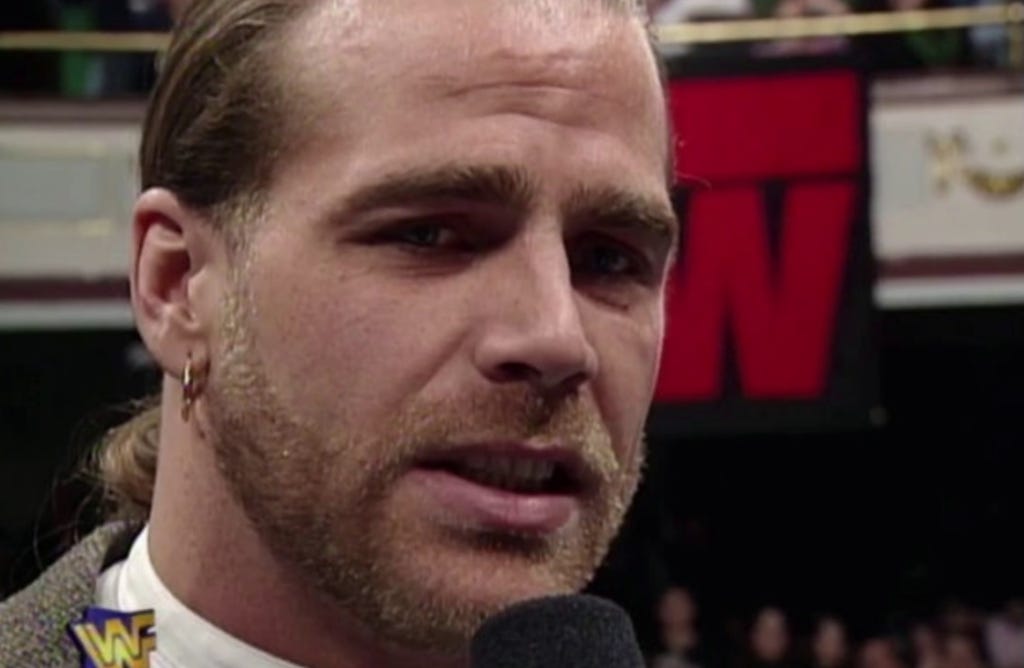 When Michaels did return, his feud with 'The Hitman' continued, annnnd he pretty immediately insinuated Hart was having an affair with WWF Diva Sunny, leading to a legitimate backstage fight between the two. Michaels was turning heel at the following SummerSlam, taking over Bret's role as the main heel in the company, and Bret once again felt betrayed. He didn't want to leave the WWF, but felt his hand was being forced - and it kind of was. Vince revealed plans to have Michaels beat Bret three times, followed by "Stone Cold" Steve Austin winning the championship off Michaels at WrestleMania, and Bret inked his name on Bischoff's contract.

Now, the WWF had one giant issue: their champion had just signed with WCW, and he wasn't interested in dropping said championship to Shawn Michaels - his next pay per view opponent. Why wasn't Bret willing to drop the belt to Michaels? Well, actually, he was, and told Shawn as much in front of the entire locker room, and Shawn's response was, "I appreciate that, but I want you to know I wouldn't do the same for you", so the thought of Shawn going over Bret clean in Montreal was now off the table. He offered to lose it on a house show at Madison Square Garden instead, but Vince declined. Survivor Series' main event was now a puzzle nobody had the pieces to.

Vince McMahon met with Shawn Michaels and Triple H multiple times to discuss options for the finish of the match, and both of them allegedly mentioned the possibility of a double-cross. Vince was desperate, decided that last-resort option would become a reality, and clued in only Shawn, Hunter, and Gerald Briscoe on his plan. Bret was paranoid about a potential double cross, and asked around about it, but was reassured by everyone (including Earl Hebner, the referee of the match) that they'd never let it happen. Vince McMahon then met with Hart, who was secretly wearing a wire while filming for his documentary, 'Wrestling With Shadows', and the boss told Hart that D-Generation-X interfering in the match would be the finish; a disqualification.

Shawn and Bret had one final meeting before the match, where they agreed to bury the hatchet and let the past be the past, but obviously, the events that followed wouldn't allow that to happen.

On Hebner's way to the ring on the night of November 9th, 1997, Briscoe told him to call for the bell as soon as Bret was put in the Sharpshooter, and let him know that if he warned 'The Hitman' of this in any way, he'd be fired. The match went on with Vince at ringside (who was there under the guise of "keeping the match under control"; actually there to make sure the double cross was executed correctly), and at twelve minutes and fifteen seconds in, the sharpshooter was applied, and the wrestling business was changed forever. 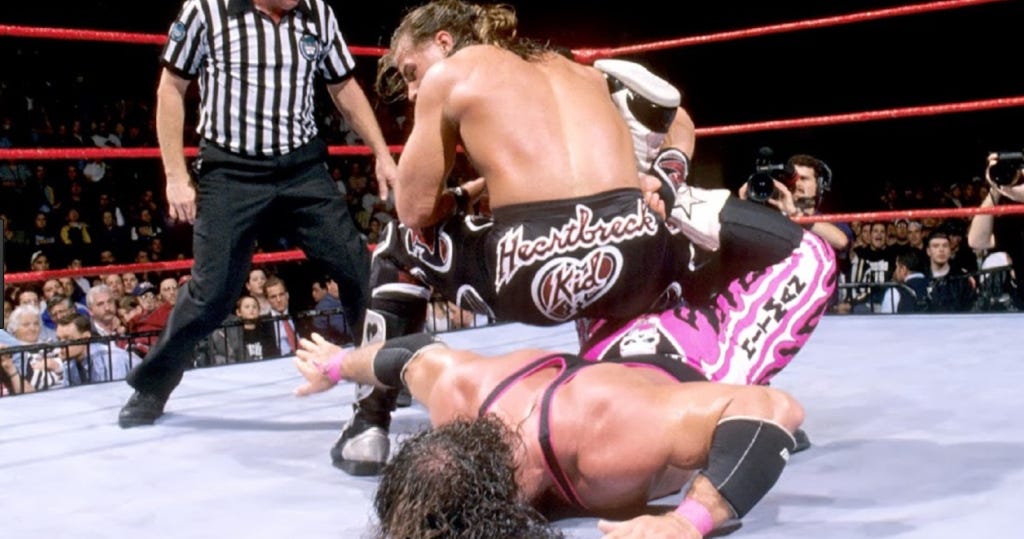 Hebner called for the bell, and Bret popped up startled, trapping Shawn under his legs and shoot-reversing the hold. Then, he realized what just happened. Bret had been screwed. He let Shawn go, and there was mass confusion at the Molson Centre. Nobody but the men on the inside of the barricade knew what was going on.

Bret spit in Vince's face, drew the letters "W-C-W" in the air with his finger, and caused havoc ringside with the rest of the Hart Foundation. Reportedly, a riot was awfully close to breaking out amongst fans. Could you imagine? 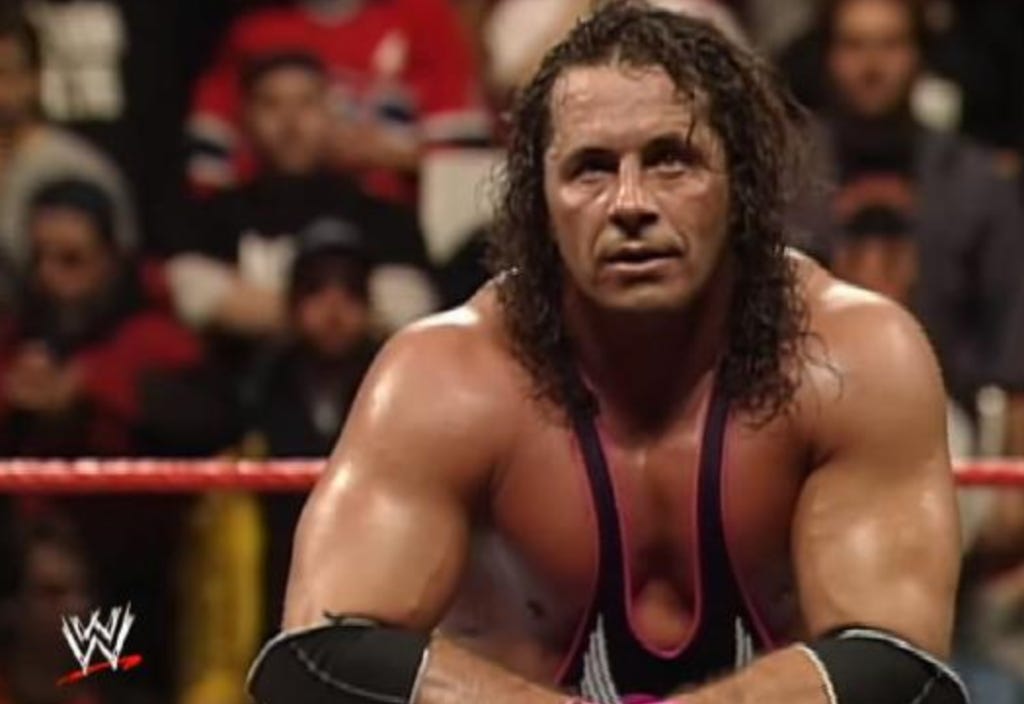 When Bret made his way backstage, he asked Shawn if he were in on it, and the Heartbreak Kid ADAMANTLY claimed he wasn't.

The Undertaker, WWF's locker room leader, demanded Vince apologize to Bret immediately, and when McMahon showed up to Bret's locker room with an entourage of goons behind him, he was met with a knockout blow to the chin. Bret claimed that there was a bit of a tie-up and he sent Vince to the floor, but all other accounts suggest Vince basically let Bret punch him. Hart's documentary 'Wrestling With Shadows' captured the chairman wobbling out of the locker room, clearly concussed and on another planet.

The fallout of this incident, now known as the "Montreal Screwjob", resulted in Vince McMahon becoming the evil on-screen "Mr. McMahon", arguably the most iconic character in the history of professional wrestling.

It took about a decade, but Bret was welcomed back to the company and acknowledged as the legend he is when he was inducted into the WWE Hall of Fame in 2006, and four years later, Bret buried the hatchet with Shawn publicly, once and for all, on Monday Night RAW. 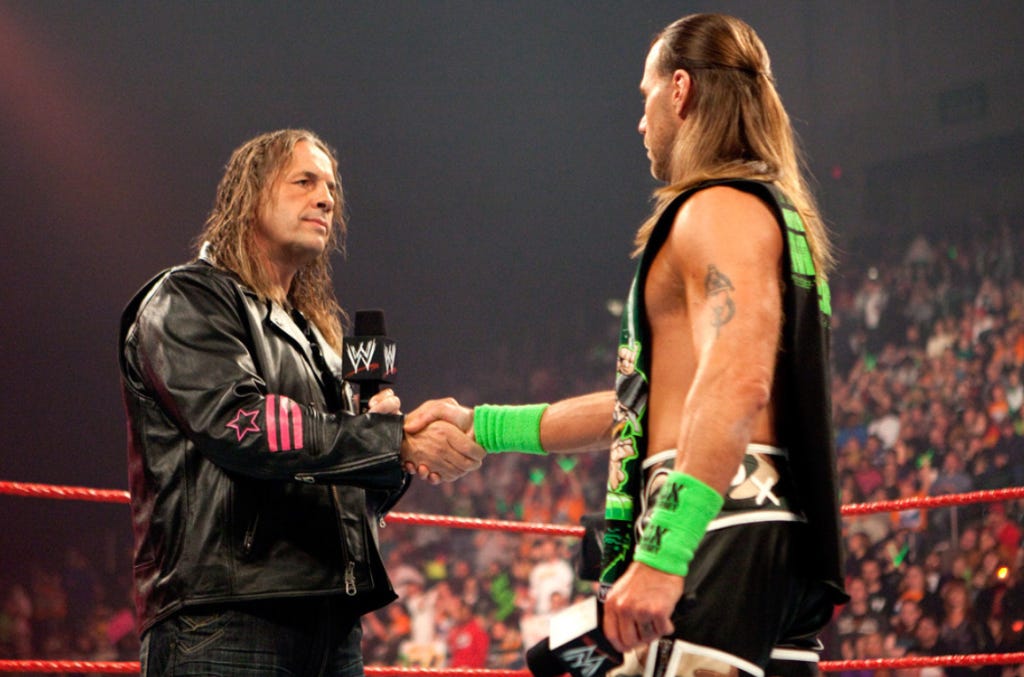 Without the Screwjob, there is no "Mr. McMahon", and without that, there may not be the a World Wrestling Entertainment.

I do wrestling interviews on my podcast ALLLLL the time and have plenty more coming up in the near future, so make sure you subscribe to be alerted when they come out!