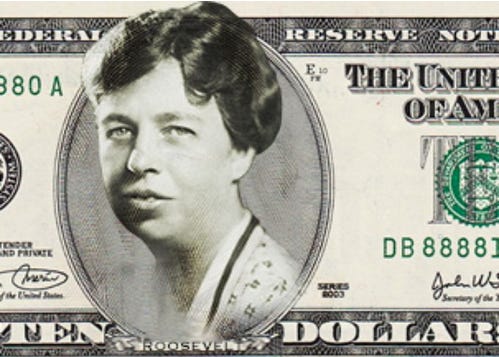 WASHINGTON — A woman will appear on the $10 bill beginning in 2020, the Treasury Department said Wednesday. Just which woman is up to you. Legally, the decision belongs to Jack Lew, but the Treasury secretary said he’s seeking public input on which female historical figure should appear on U.S. paper currency for the first time in 119 years. “We’re going to spend a lot of time this summer listening to people,” Lew said. A decision could come this fall. But even then, it will take nearly five years for the new bill to see circulation. That’s because of the intricate planning for a redesign that will incorporate new anti-counterfeit measures and tactile features for the blind.

A 10 dollar bill with a chick and blind people designs. Christ. Why don’t they just put a New York Yankee or a Patriot on there as well for your boy KFC. Maybe the chick should be Tiko Texas. US Treasury gonna make sure I never touch a 10 ever again.

To be honest its utterly ridiculous that Alexander Hamilton is losing his standing on his bill. Dude established a national bank. He founded the Bank of New York. Bro practically invented money. As a matter of fact, not only should he not be losing his shine on the 10, he should be upgraded to the hundred. Thats how important Alexander Hamilton was to the money game.

We need to overhaul all the money. First thing we need Bill Clinton to die so he can be eligible to be on some cash money, and we’re slapping him on the $20. Nothing more fitting than putting a $20 down some stripper’s underwear with Slick Willie’s face on it. Sorry Andrew Jackson. You’re out, you dickhead. I dont care that you were a backwoods brawling frontiersman that won duels and shit like that. Homeboy owned slaves and slaughtered Indians and vetoed the Second National Bank. Dude thought he was a king for fucks sake. Get off my $20 you cocksucker. Hamilton goes to the $100, Benny Frank gets downgraded to the 50. Ulysses S. Grant is out. He’s another one I dont care for. Spare me your “he won the Civil War” shtick. I just dont care for the guy. He’s wallpaper. And I feel like we need Kennedy on some paper money. Dude was the original Presidential Cocksman. We need to invent like a 15 dollar bill or something for him.

As for the chicks, my vote for #TheNew10 is Marilyn Monroe. Put that picture of her dress blowing up in the wind right on there. If we’re gonna do this girl nonsense, lets do it right. Marilyn fucked 2 Kennedy’s, Sinatra, and Dimaggio. She knew the true Power of the Pussy. She used her sex appeal to basically become American Royalty and an iconic figure in history. Traded that T&A like it was legal tender. That is a woman that deserves to be on currency. No disrepsect to Rosa Parks or Harriet Tubman or any of the other ugly chicks they’re thinking about putting on there, but Marilyn is the choice.