It is time for Week 2 of our Stool Streams Jenga Season. Leading up to today, 11 out of the 12 teams have played at least once. But that changes this afternoon. Our final team makes its debut, while a few others will complete their third match in this six week season. Let's break it all down for you:

Storylines: This is a HUGE day for Team Pubes. With an 0-1 record, they face disaster if they lose both matches in their doubleheader. Billy and Rudy try to sweep Team Pubes and lock up the tiebreaker vs. them, as they reach the midway point of their season.

"I look at the tower structurally when it's my turn." - Billy

Analysis: Team Pubes has to do their best to ensure that this isn't a look ahead spot for them. With all the chatter being about their second match and Frank The Tank's debut, they have to earn a win against an unpredictable Berserkers team in the opener. Billy and Rudy need to put their tough loss behind them quickly. 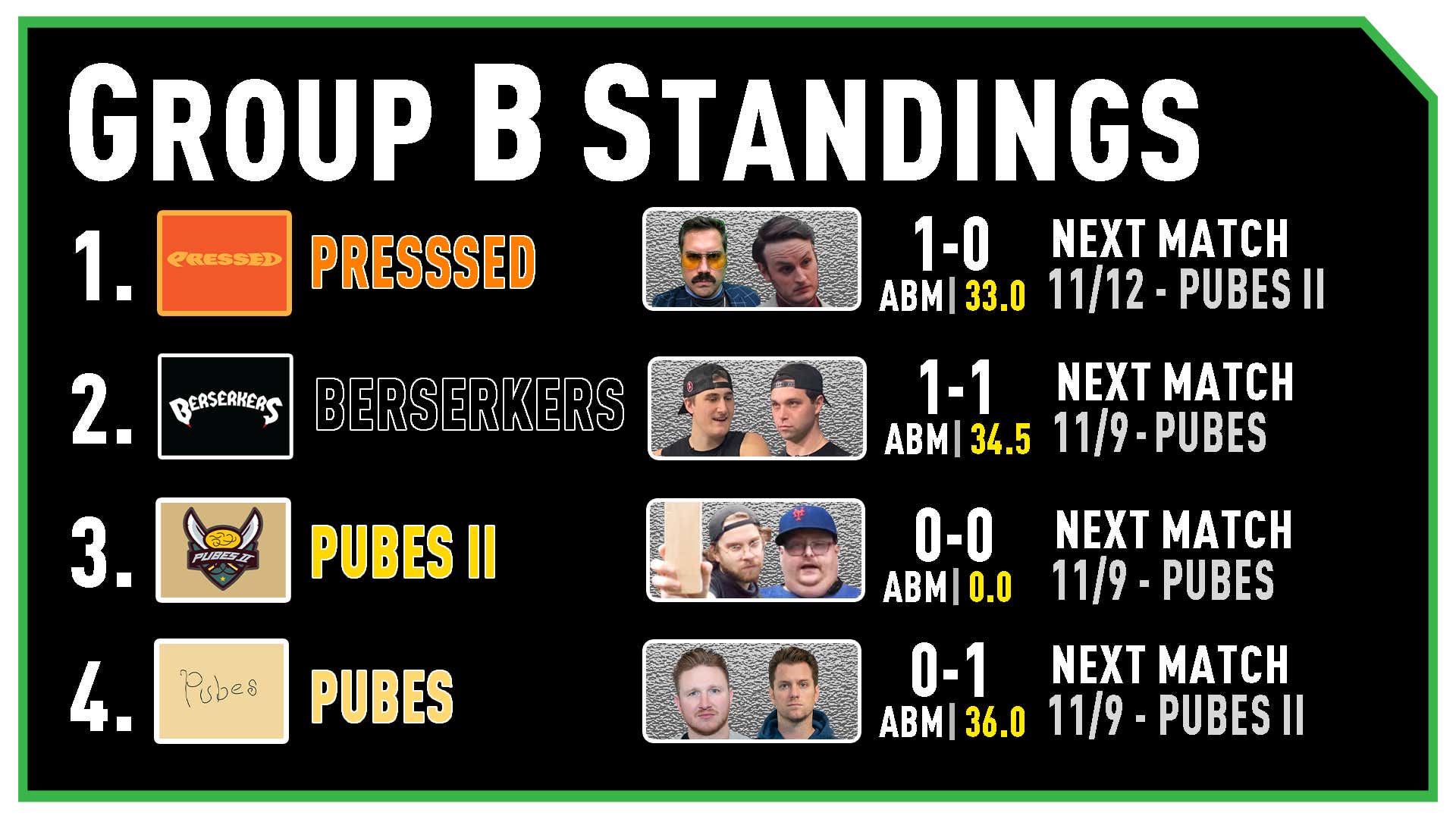 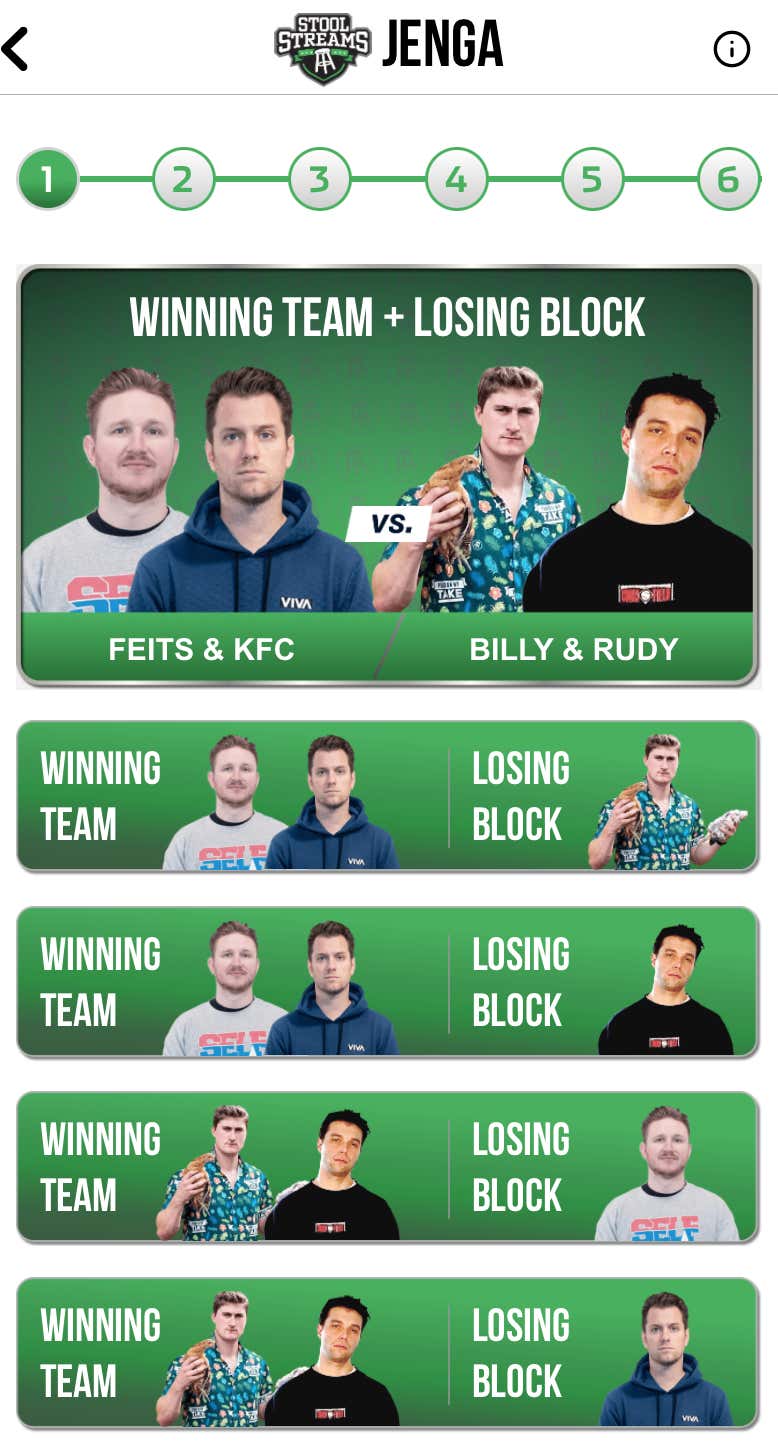 Storylines: It's the highly anticipated debut of Frank the Tank! He was the penultimate pick of the draft by Captain Nick, as they look to make a statement in their opener. KFC and Feits will be playing in the first ever doubleheader in SS history, but this match will say a lot about the state of their team at the midway point.

Quotes to Remember: "I expect a little mental warfare from Nick. Frank? I have no idea what to expect." - Feits

"Why Frank? He had the best measurables. He has fresh fingers, has yet to play, and he's a morale boost." - Nick

Analysis: We have no idea what to expect from Frank The Tank. He is the lone rookie in tomorrow's lineup, and PLENTY of people are talking about his debut. How will Captain Nick pave the way? If Team Pubes loses their first match, they would potentially face elimination with a loss here as well. 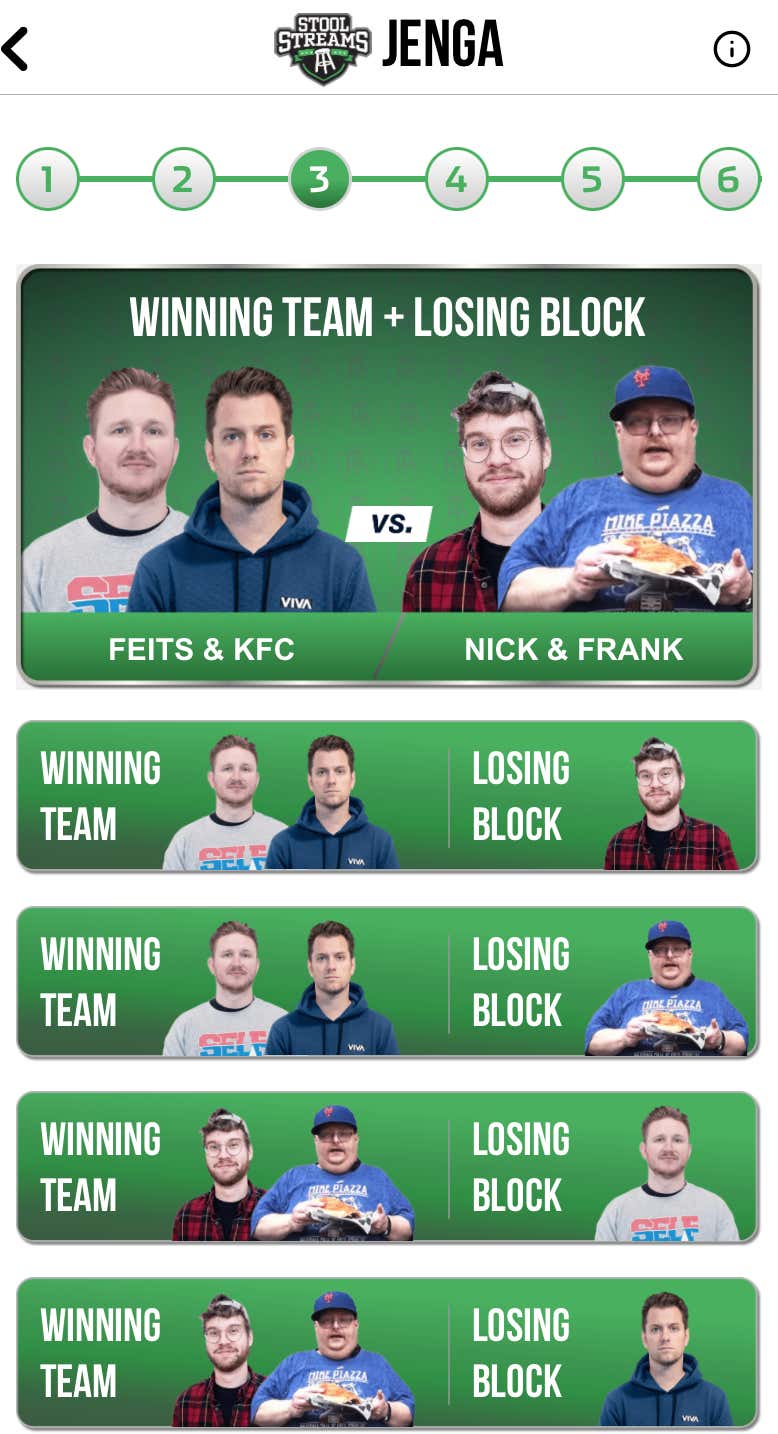 Storylines: Da Chalk looks to move to 2-0 in Group C, as Josh Duhamel aim to even the playing field. All FOUR players in this match have winning records in their Jenga careers (combined 14-8). This match will determine if Liz and Ev can create some space in the standings, or a Duhamel win will even both records at 1-1.

Quotes to Remember: "This is a marathon, not a sprint. We will take our time and be patient. We trust each other. I have a certain level of trust with Big Ev. I'm confident in his ability." - Liz

"Liz is prob the toughest competitor in all of Jenga, but Ev, damn, actually they're both pretty good.  They're both good on their own, but together, they cant be that great of a team." - Kate

Analysis: This is a HUGE opportunity for Da Chalk to cement themselves as the team to beat. With a win, they'd be the only 2-0 team in the entire league. On the flip side, Team Josh Duhamel can't afford to fall in that 0-2 hole. 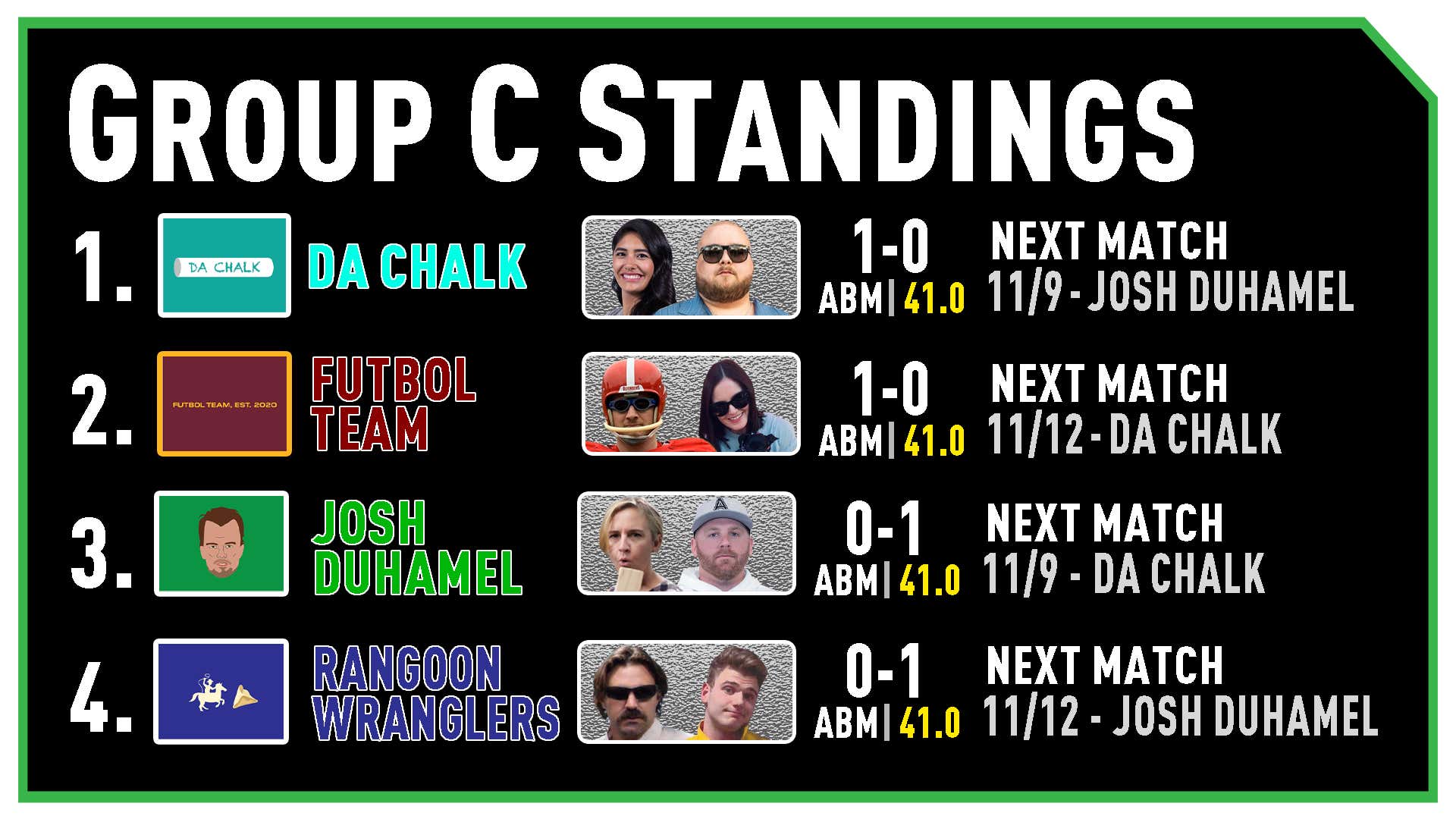 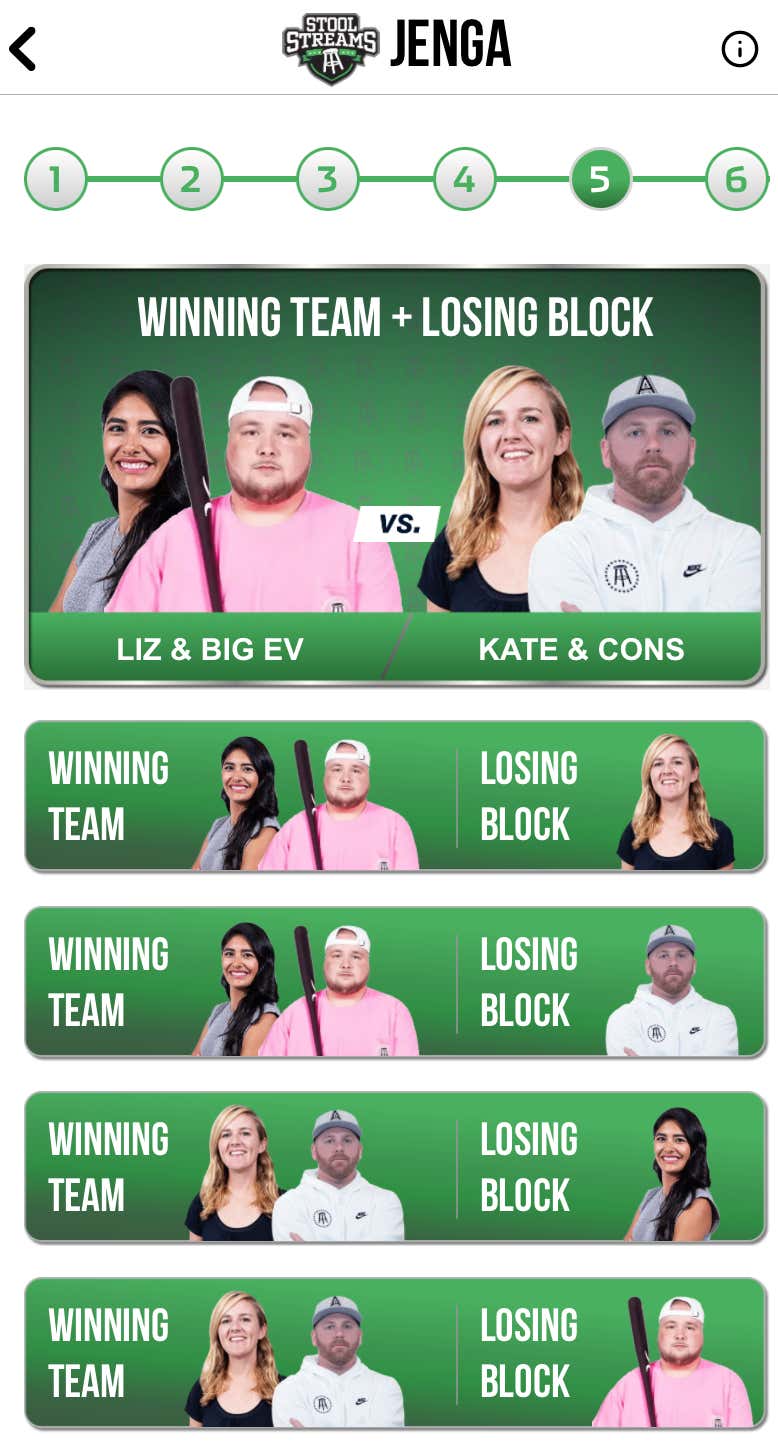 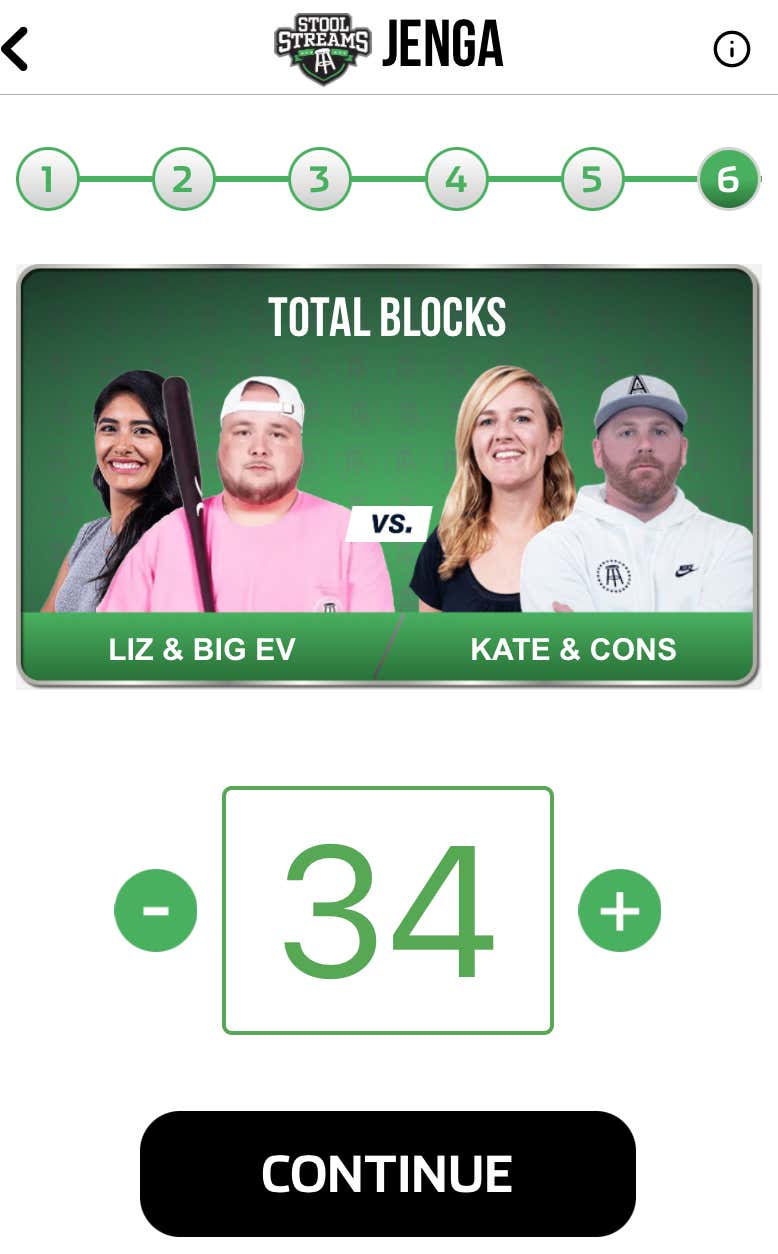 Last order of business - block orders. These are crucial if you are interested in winning the Progressive Jackpot (aka, everybody):

It's a later than usual start time today, with first pull at 3 PM ET. Hope to see you then!