Last night, I was lucky enough to be invited over to Gaz's apartment to watch the election results. Gaz, Chuck, and Gay Pat had been planning this get together for a long time. I didn't think it would happen, but election night came and I was in Gaz's apartment. Some on Twitter thought Gaz was joking, so he tweeted this picture out.

This caused quite the stir. Not because of Tyler's glasses, but because of my shoes on the couch:

Kate even wrote a blog this morning about it:

I think there were 50-100 tweets sent to me about being a barbarian for wearing shoes on the new white couch. I was thinking of immediately clarifying why I had shoes on Gaz's new white couch, but I decided not to so I can make myself appear as an alpha.

However, some of the slanderous statements on me are getting out of control.

Now, I am ready to release my explanation.

When I arrived at Gaz's I saw that he and Tyler were on the desk. I then sat in a chair near the couch. Gaz posted his original tweet and then to prove that our election night party was not a joke, he wanted to take a photo. Gaz got up from his seat and told me to sit next to Tyler for the photo. Immediately after the photo was taken, I moved off of the couch.

As you can see in this photo, there was no point that my shoes were really on Gaz's white couch: 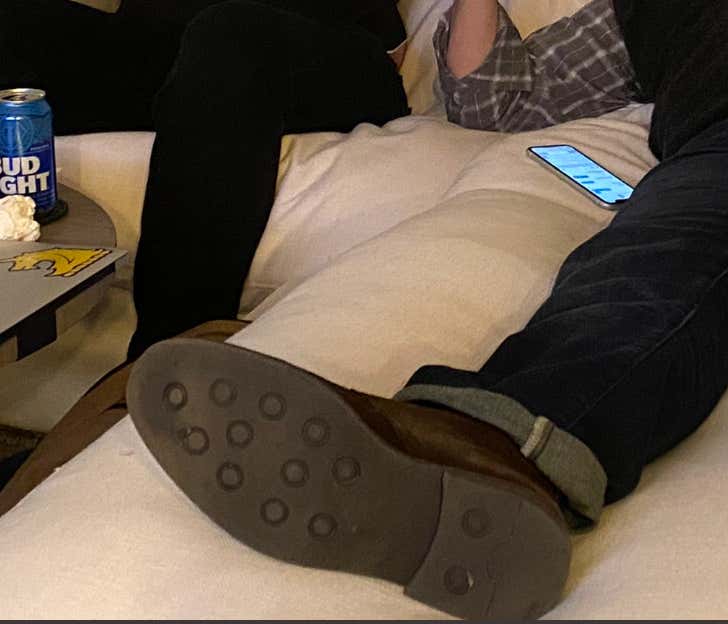 I specifically positioned myself to make sure my shoes were not going to get his couch dirty! Anybody doubting this is just trying to slander me. I am not a psychopath raised by animals. Should I have taken my shoes off once I entered Gaz's apartment? Sure, I will do that in the future, but I was not trying to stink up the place! However, I was on the couch for a total of 30 seconds. Not the entire night.

Thank you for all your concern. I appreciate it.