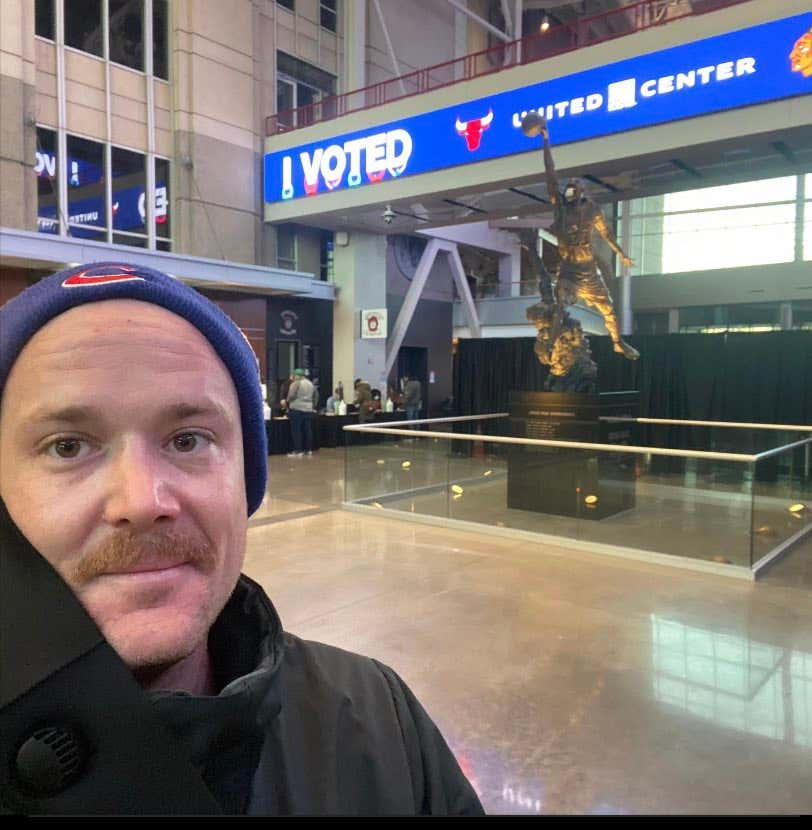 Act 2: Be the only person in the first hour of voting at the United Center to take advantage of the MJ Selfie Station, catching the attention of a Tribune photographer. 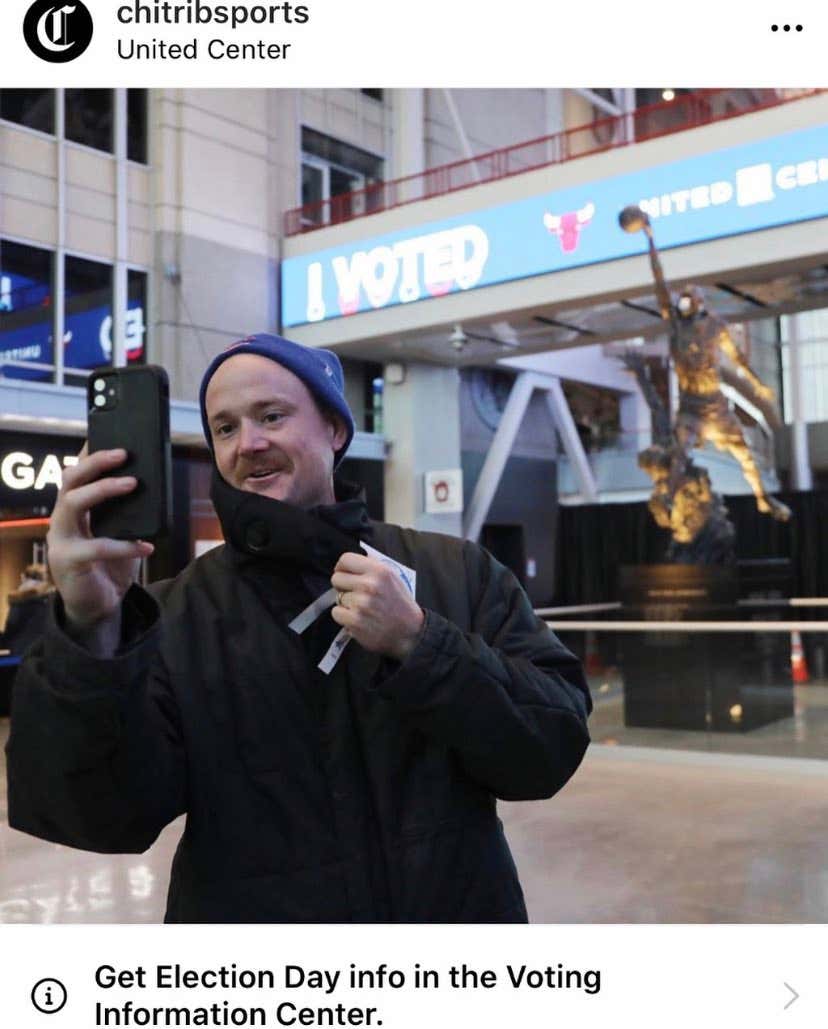 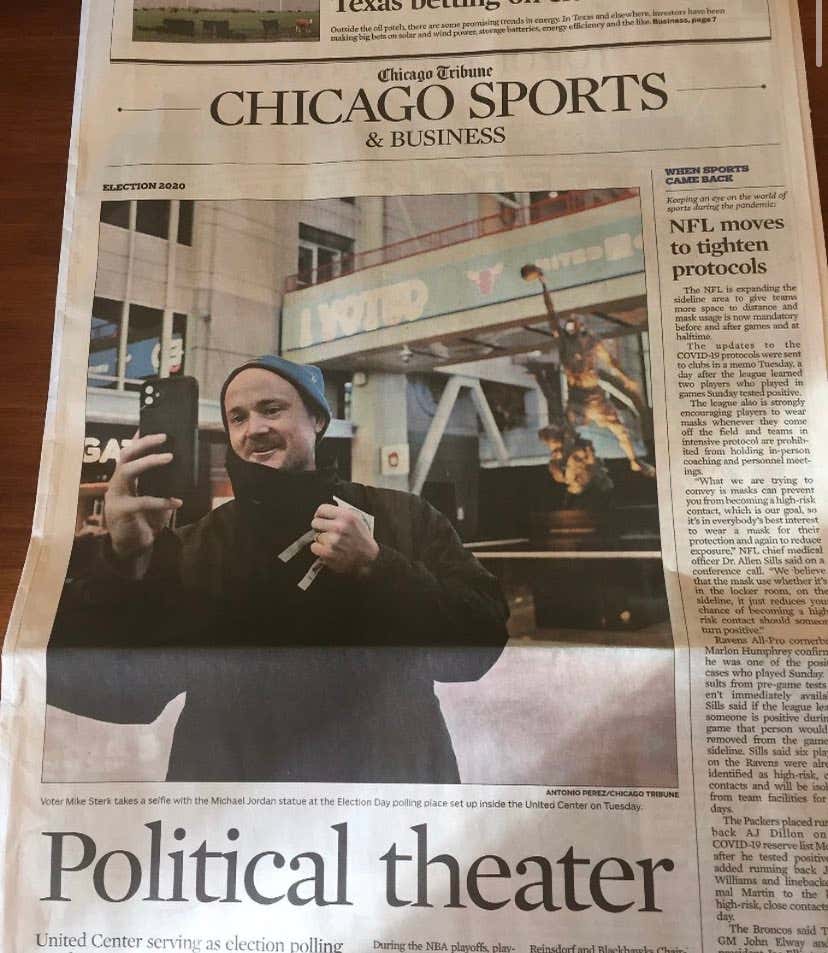 I'm a big Michael Jordan guy so it was easy to stop for a quick picture to commemorate my attempt to fight off a vague amendment to our state constitution. What I didn't expect though was that I'd be the only person at the United Center to do it. Lighten up guys. You're still walking around with stickers on your tits. You can throw a selfie on the gram with the GOAT without compromising the integrity or validity of your ballot. Personally I was hoping Benny the Bull would be on site with a t-shirt cannon but alas, no such luck. Disappointment takes all shapes and sizes.

And not to be too self-felating, but there's more disappointment. Turns out this is the first post Election Day in American history where newspapers aren't readily available for sale. I'll take the action but if I'm going to be the face of American Democracy, we're going to need broader circulation and deeper distribution. I'm not begging for the exposure I'm just saying all roads lead back to pageviews. We know that by now.

Some other news and notes:

- My name is Michael Carl Sterk. I was working at a big accounting firm when I started blogging here in 2013 so I used a nickname, Carl. This has been talked about many times on many Barstool channels but understandably the internet is a big place and not everyone is up to date on 7 years of content. If you're surprised by this news I encourage you to listen to Barstool Chicago radio on XM daily 2-3pm central. If we're just getting to know each other you won't be disappointed.

- While we're fake doxxing me I also lead off every Red Line Radio with the introduction: From Oak Lawn, St. Germaine, Brother Rice and The University of Illinois… I don't think I've ever said that I grew up in Chicago but I know that will bother a lot of you that I'm from Oak Lawn. I don't give a fuck. Oak Lawn was a great place to grow up. Great people. Great fucking blue collar, family-based values and a general passion for Chicago sports. I'm a proud product of that environment and no amount of Oak Lawn slander that will change that fact.

- My mom went to St. Dennis then Mother McCauley. My dad went to St. Mary's and St. Linus then Brother Rice. Yesterday on Sirius we talked about the Leo alumni association as it relates to other Chicago Catholic League blue bloods before talking about Gately stadium as a home venue. My uncle Bob was a running back for Leo in the 30's. Grandpa Carl played guard at St. Ignatius. I'll stop but you get the point. I was born into my passions. That's enough background.

- Just kidding I was a D1 baseball player at Illinois for 4 years. Played a lot for 2 of them despite being a nobody walk-on with limited off-speed command. Don't ever think I'll get personal without reminding you guys that D1 athletes are hard to come by. Especially ones with this kind of two seamer

In somewhat serious fashion I hope everyone has a nice Wednesday. Regardless of your politics we can agree I was tough on righties.