Last night, Steven Cohen's strikingly gorgeous  wife posted a picture of the proud new owners of the New York Mets. El Jefe and La Jefa Cohen...the new King and Queen of New York. Its a wonderful picture that inspires hope and happiness in Mets fans everywhere. Alexandra Cohen, one of the most generous women in the world of philanthropy, rocking a "Ya Gotta Believe in Uncle Steve" shirt from a local Etsy artist: 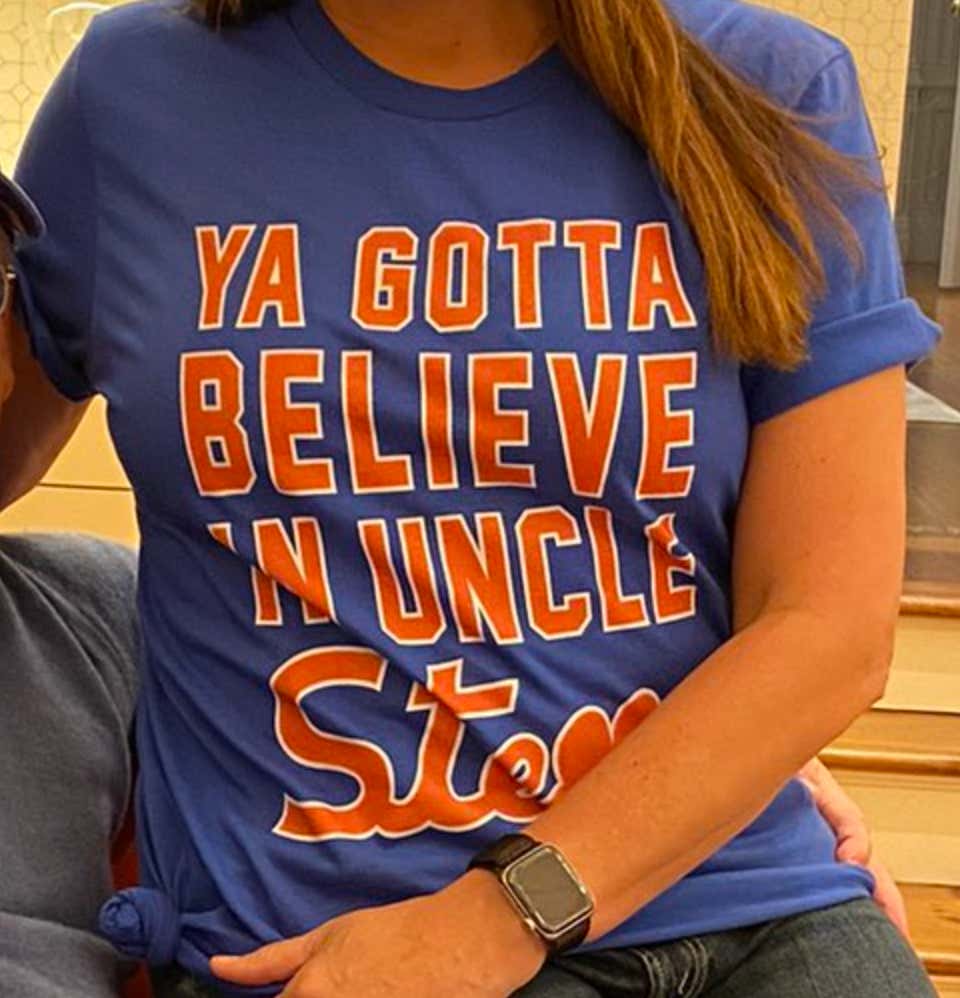 On the wall in the background of the picture, the work of another artist hangs. Probably a piece worth tens of millions of dollars. 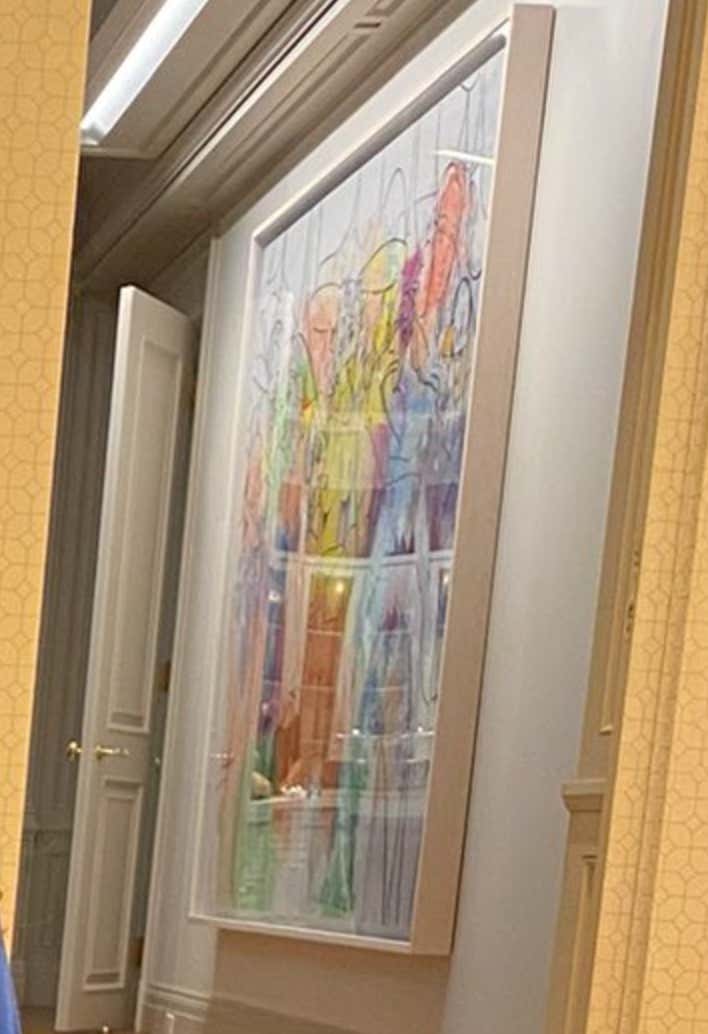 I'm only guessing, but its truly a safe bet that its worth like, at least 20 million.

On the shelves behind the beautiful couple, happily married since 1992, some sort of decorative device. 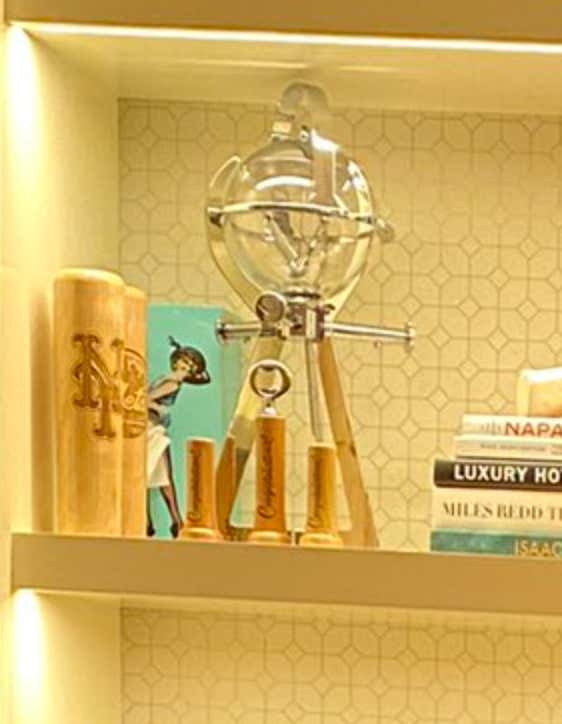 Some sort of nautical navigation piece? Something similar to one of those Galileo Thermometers? Personally I think its a billionaire time travel device. Like the orbs they used in Dark to travel through time and bounce into alternate dimensions.

But all of these focal points pale in comparison to the most intriguing sight of all: 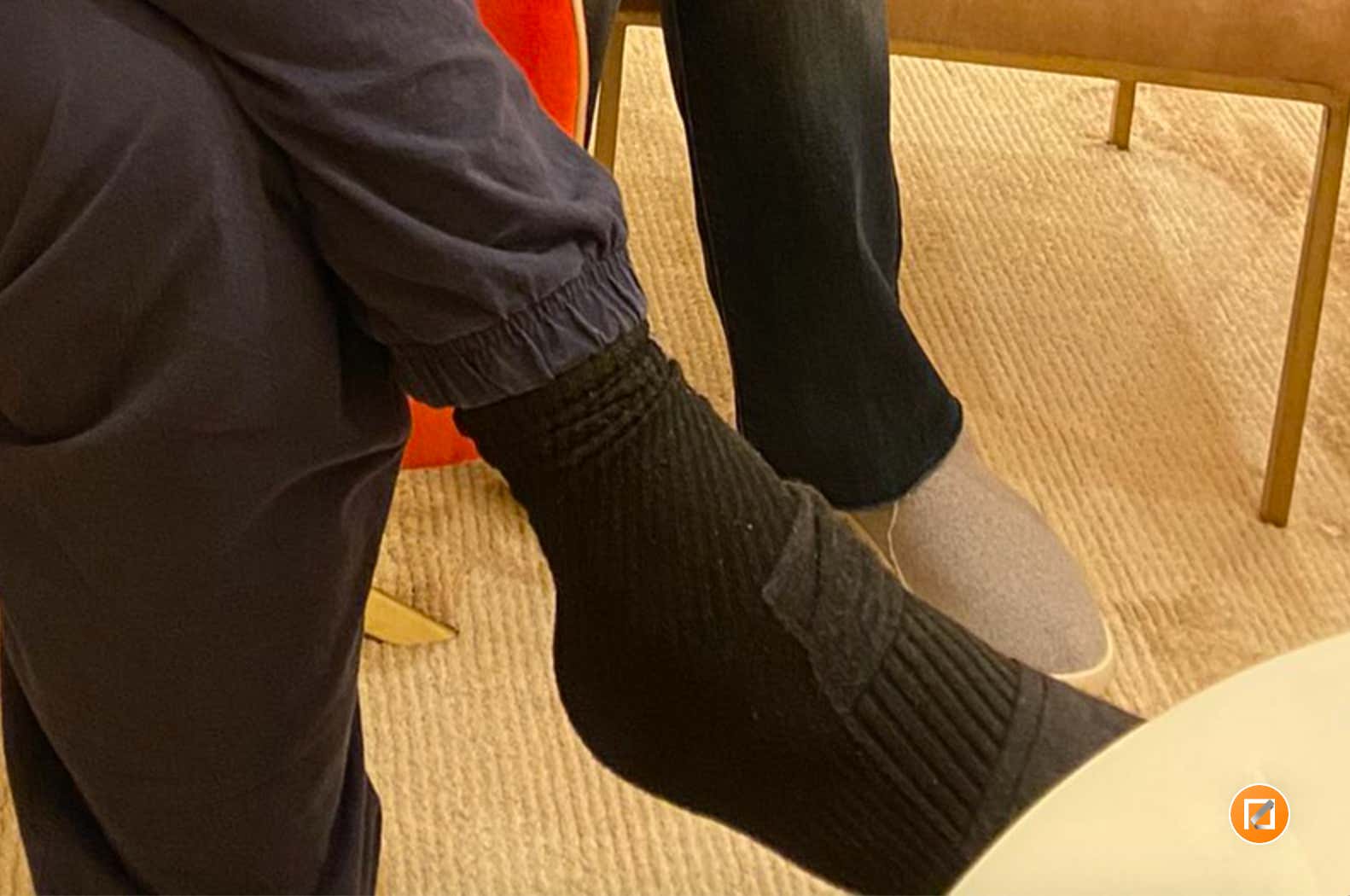 Jesus, Mary and Joseph, and all the saints. They're…they're beautiful. Simply marvelous. What in the world am I even looking at? Is this man wearing his socks inside out…AND upside down? Is he wearing them…backwards? Are these some sort of special socks with extra padding? Some sort of double sided sock with protection for the top of your foot? A sock/slipper hybrid?? Who knows. Its not even worth discussing. Because its a pair of socks that mere plebeians like you and I have never seen before, and may never see again. These socks are probably 15 million dollars. Each. 30 million a pair. This is some sort of billionaire garment we dont even have access to. Like quaaludes at parties or a vaccine to the corona virus. Theres some things that low-net-worth-losers like you and I just will never have. Steve Cohen has a seat on the spaceship that leaves this planet when Armageddon hits…and he has these double sided reinforced socks. Super Socks, for lack of a better term.

Now, of course, some peasants are trying to throw rocks at the throne. Nay, pebbles at altar. Trying to mock my savior for his sock choice. Outing themselves as the broke boys and girls of the world. That is a normal billionaire sock. Move on, find a new slant. We already know he doesnt play by the same rules that you, and I, and all the other small minded losers of the world, play by. We already know he revolutionized Wall Street and reinvented the game of day trading. And now, hes taking that same advanced approach to sports, and fashion. Reports are stating that Steve Cohen is going to hire not one, but TWO GMs. He's posting pictures and accidentally breaking all our brains. He's revolutionizing the game of baseball and the socks industry…and its only DAY 1 OF THE COHEN DYNASTY. Watching this man operate is incredible.

Step 1: Confuse them with my weird socks

You can't stop Steve Cohen, nor can you contain him. You can only pledge your allegiance and hope he shows mercy and spares you.

Now if you'll excuse me I have to go put my socks on upside down, inside out, and backwards. In Cohen We Trust.