So this report is making the way around Cincinnati Twitter. John Ross, the No. 9 pick 2017 Draft, is one of the hottest issues on the Bengals. He can't get on the field. He never lived up to the hype. All that good stuff. Remember the 2017 Draft? If not you'll want this reminder on who went right after Ross: 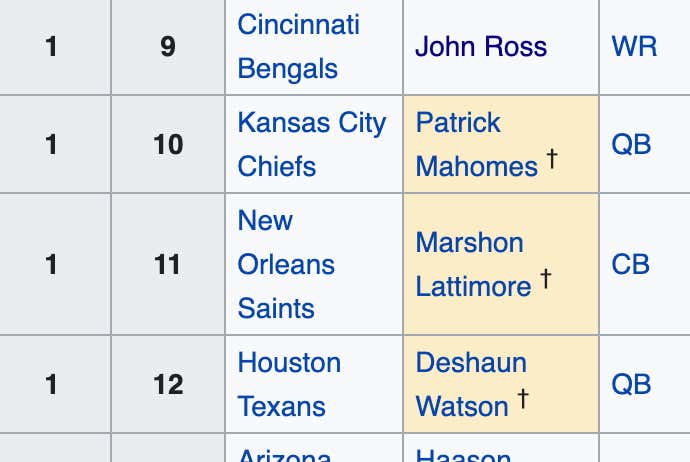 Some names people might now. Pat Mahomes, that guy is pretty good. So is Deshaun Watson. So is Marcus Lattimore. But it's the Bengals we're talking about here. Naturally John Ross responded to the tweet with his own:

There it is. The last line implying that it's the Bengals, the front office, the coaching staff, whatever it is that he doesn't like. It fits the mold of what Carlos Dunlap did this year

And all is right in the world. Joe Burrow is awesome. The Bengals always have been and always will be the Bungals. There's a reason that name sticks around the city here. There's a reason they were known for consistently having fans with bags on their heads. It will never stop making me laugh see how miserable my friends get during football season. And yeah, sure the Giants suck now, but I've seen a couple Super Bowls. That gives me an ease of mind.

Nothing cracks me up more than Bengals stories. Just demanding trades on Twitter. I'm waiting for Ross to try and sell his place on social media next. Based on history that will get him traded. But the problem is, there's not really a market for him. Sure someone may give up a 7th rounder but he hasn't exactly done anything in the NFL.

I've said it before but the Bengals can never be good. They can't be a normal franchise. It wouldn't be right. There are some places that always have to be the lovable losers. The Bengals fall into that category.

PS: It was all in respect of course