People - Even the country's best young athletes don't always have an easy path to success, a new HBO Sports documentary series will explore.

The four-part docuseries, titled The Cost of Winning, will follow the football team at St. Frances Academy in Baltimore, Maryland.

St. Frances Academy — a 200-year-old Catholic school — was expelled from their private school league in 2018 for being "too good" and forced to create an independent schedule, according to a press release.

The series will follow the controversy and how the Panthers rebuilt the team to better serve their players, who come mostly from a neighborhood plagued by gun violence. In addition to difficult lives outside of school, the team also deals with inadequate facilities and resources, all part of the docuseries.

Among those profiled are the team's head coach Biff Poggi, as well as some of the top Panthers recruits.

“We are excited to bring the inspiring story of Baltimore’s St. Frances Academy to life on HBO, and to showcase the adversity and challenges the Panthers endured to save their program,” said executive producers Strahan and Schwartz-Morini.

The first two episodes will debut on HBO on Nov. 10 at 9 p.m. EST, with parts three and four airing the next night at the same time. The episodes will also be available to stream on HBO Max.

2- The pussification of America continues.

We penalize people, in this case an entire team of people, for being too good now?

What fucking country are we in?

And the worst part is this isn't some football factory highschool like (insert name of one of a dozen Illinois private schools that Carl always talks about that's had a powerhouse football program for 50 years). This is a team that 4 years ago was the laughingstock of their league.

They were from a tiny, under-resourced black Catholic high school in a bleak pocket of Baltimore. There was little money for coaches or uniforms or travel. Their MIAA rivals regularly beat them by double digits. In 2010, they lost every game. In 2015, they won only two.

Then they landed coach Biff Poggi. And everything changed.

That all changed with the arrival of Poggi, who had led the tony Gilman School — his alma mater and one of the MIAA’s richest schools — to 13 league championships in 19 years. In addition to being a successful coach, Poggi is a wealthy businessman, and when he came to St. Frances, he brought his money with him — so far pouring $2.5 million into the football team and the school. In just three years, he has helped build a juggernaut of a program, with players receiving football scholarship offers from the likes of Clemson, Alabama and Oklahoma.

This is a real life Gordon Bombay (minus the DUI and court-appointed community service). And minus the sleeves. Look at this guy. 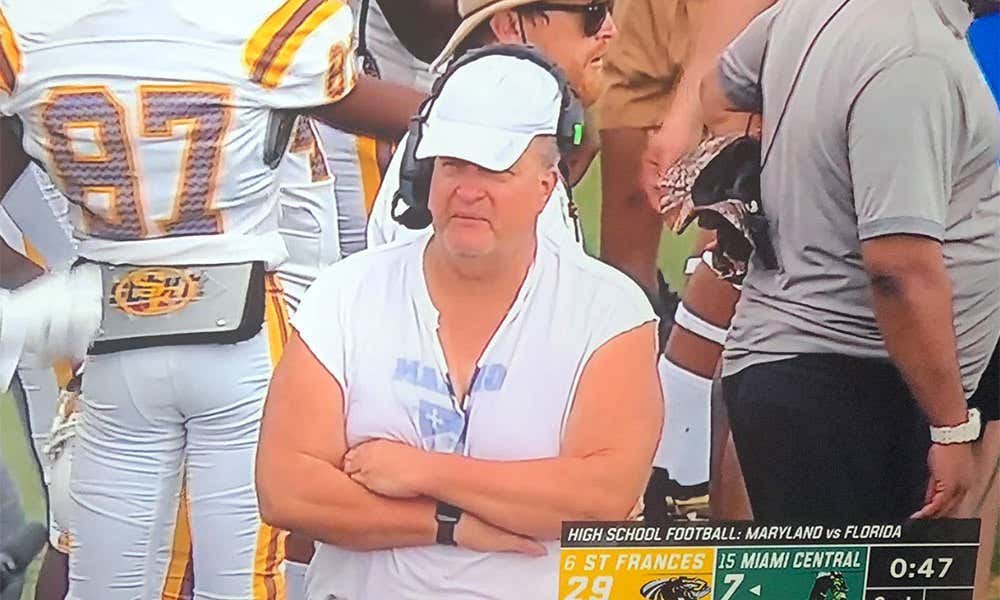 A guy who had it made in the shade and could have stayed coaching the cake eaters on the other side of the tracks. Instead he decided to take his talents to the underdogs, and brought his checkbook with him to level the playing field. Better field, weight room, equipment, and an attitude of "we belong" and look what happens. All of a sudden the cake eaters cry foul and expell the team they used to beat up on from their little creampuff league.

What we have here is basically the reverse case of Notre Dame.

"We're better than everybody else so we refuse to be in anybody's league and play a schedule mandated by said league. We will create our own schedule, not be subject to a conference championship, and continue to pour massive glasses of Kool-Aid for the general public to lap up like thirsty dogs. Pay no attention to the man behind the curtain."

Abandoned by their league shortly before summer workouts began, they were forced to create an independent schedule at a time when many teams at their level were already booked. Which partly explains why, on Oct. 12, after a nine-hour drive from Ontario, a small but brave team from Canada Prep Academy spills out of a bus onto the gridiron at Patterson Park. From the sidelines, a few Panthers assistant coaches stare at their opponents in disbelief. There are barely enough players to field a team.

So props to Strahan for recognizing this story as one that should be told, and putting the pieces in place to tell it. Hopefully, this program, the kids, and Coach Poggi get the respect they deserve from this and it shows what pussies the teams in their former conference are.

p.s. - here's a great piece from The Washington Post on St. Frances. Worth the read.

p.p.s. - how sad is it that Coach Rush Propst and MTV's Two A Days missed the social media revolution by like 5 years? Talk about a show being ahead of its time. Just a top ten reality tv personality with some of the greatest lines of all time coming out of his mouth a mile a minute. And the other characters as well - Repete, Max, Ross (bitch), Goose, Cornelius, and of course Kristin… Granted if the show aired today there's a 100% chance Rush would be canceled and/or in jail for child endangerment but that's what came with the honor of playing for Hoover Hight.  That's after the fact he was actually in hot water for providing pain killers to players and having his teaching certificate revoked. But as he said, "the truth prevailed" and he's back. Regardless, I feel like when news of this show reaches him he'll pound his fist through some drywall and scream to himself "I'll see ya Sunday!"