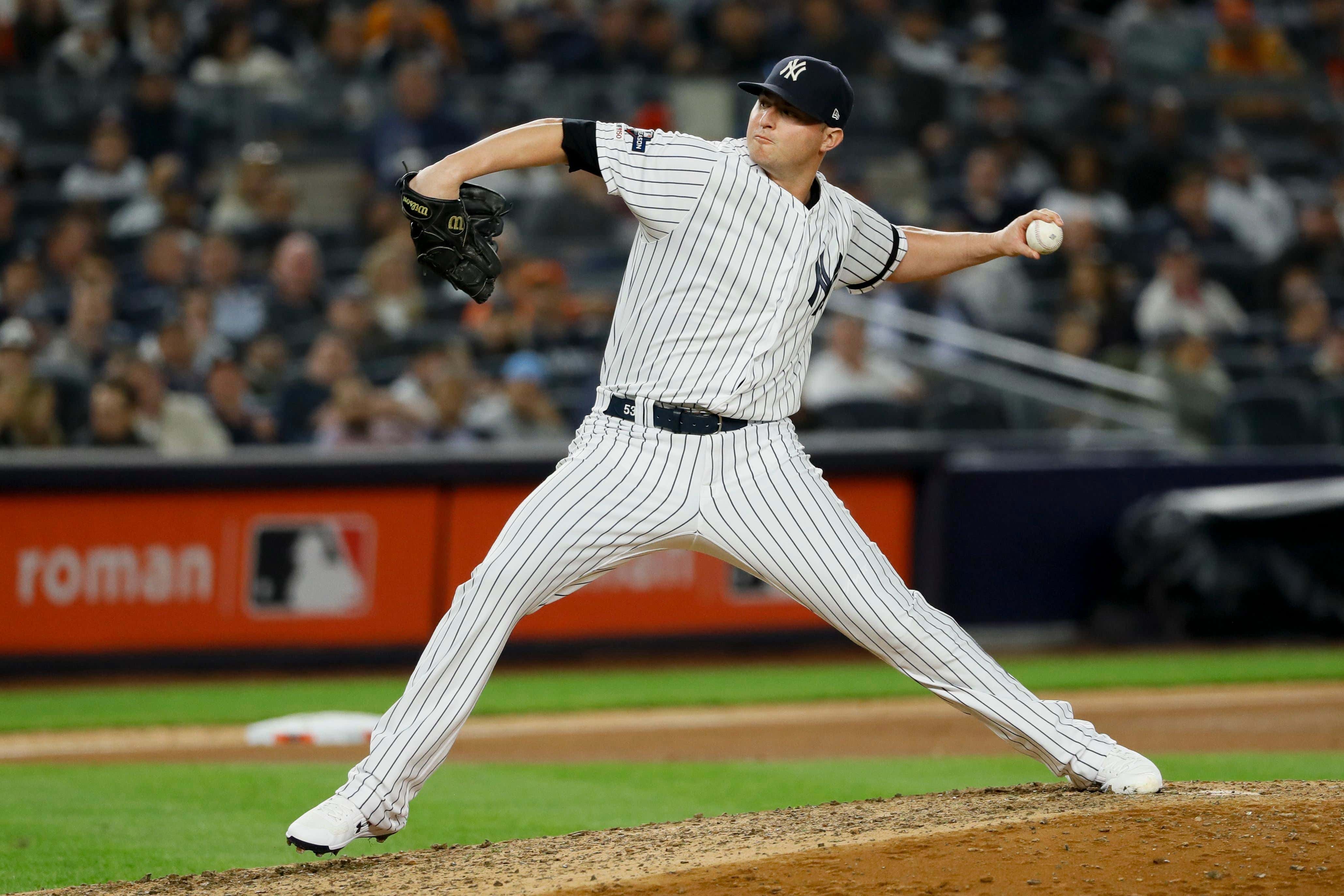 Great news in Yankee land with the team announcing they've exercised their option on Zack Britton. I was a little worried with Britton because the reliever market in the offseason is going to be fairly cheap with teams losing tons of money in 2020. One could have seen the Yankees saving the $27 mill on his two year option and bringing in guys for less money. For example, a guy like Brad Hand, coming off a career year leading the league in saves, was just waived from Cleveland so they can save a few bucks. Britton's contract was set up in an interesting way where the Yankees had the option to opt in for the next two years. If they declined, Britton was then given a player option for this upcoming season and could have elected to become a free agent. I'm glad that headache has been avoided and the Yankees have elected to pay the man.

This past season the left hander was the Yankees best reliever by far, posting a 1.89 ERA in 19 innings. In his three seasons with New York he's been everything they could have asked for and more. He pretty much has gotten better after each season and is also a great dude in the clubhouse. The Yankees took a gamble on Britt, hoping he'd return to his prime form before he had his achilles injury. Well, I'd say he's back and could very well be in the mix to take over as the closer sometime in 2021. To start this past year he was the closer as Chapman sat out and recovered from covid, and was excellent in the role. By the end of the season he was the most relied upon man out of the pen. With Chapman's fastball getting slower by the day, I wouldn't be stunned to see Britton get more chances in the 9th inning moving forward.

On top of the Britton news, the Yankees announced they have declined Brett Gardner's $10 mill option and J.A. Happ's $17 mill option for 2021. Both in my opinion were complete no brainers. Brett Gardner is no longer a starting outfielder for this team. Left field is Clint Frazier's and no one else's. Period. I don't want to hear about any platoon shit or lack of trust in Clint moving forward. That's our guy. Give him a full season and unleash that monster. No longer is he this defensive liability, especially considering he's a finalist for a gold glove currently. Play the man. If Gardy wants to come back on like a $3 million deal to be a 4th outfielder and a clubhouse guy, fine by me, but that's it man. Enough with the bullshit. He's nice to have as an insurance policy to the always hurt Hicks and Judge, but he's not worth anywhere near $10 million and he knows it.

J.A. Happ's player option? Maybe the quickest no ever said in the history of no's. Just a miracle the weird vesting option shit got dealt with and this motherfucker doesn't have to be in pinstripes next year. What a relief. Good riddance. I'm not wasting any more words on that bum.

These moves were handled the exact way they should have. Now you know what's next? I can't say it enough, RE-SIGN DJ LEMAHIEU. What the fuck are you waiting for? If they let this man walk I will never recover. If I have to see him in another uniform next year I'll lose my fucking mind. Just do the right thing and pay the man.

Oh and if you want to bring in Brad Hand too on the cheap that's fine by me. Restructure this bullpen with guys who actually get outs. I've had enough of the Holder and Cessas of the world. If Kahnle isn't going to be back til the summer at the earliest then you need to add a few good arms to compensate. Loasiga hasn't taken that jump yet and it's frustrating with all the tools he has. There's three guys you can rely upon: Green, Britt, and Chapman (kinda). Ottavino took a giant step back in 2020 and will need to figure his shit out over the winter. Bring in Brad Hand and give me a little assurance.

But for the love of god, re-sign DJ LeMahieu.